Of all football programs, Western Christian shouldn’t be intimidated by it’s current predicament.

The Lancers finished last in the Ambassador League last season, but perhaps even more revealing is that new coach Michael Khoshkbariie began spring practice with just 18 players on the roster.

Western Christian has beaten the odds before – quickly. The Lancers went from three wins to an undefeated regular season in just two years, surging to the CIF-SS semifinals in 2013. But just as quickly, Western found itself at the bottom of the league again.

The Lancers have their work cut out again in an Ambassador League that is deeper than it was two seasons ago. But Khoshkbariie already has 40 players out for the team. END_OF_DOCUMENT_TOKEN_TO_BE_REPLACED

Ontario Christian is only two seasons removed from a trip to the CIF finals. Success of this nature isn’t surprising for a program with one of the longest standing traditions in the Ambassador League.

What is surprising? The Knights have just one league championship over the last nine years outside of their banner season in 2012. Even more surprising? Last year, Ontario Christian missed the playoffs for the first time in at least 15 years.

A new coach, a strong returning nucleus and a promising young quarterback are plenty of reasons to believe this year will begin the Knights’ climb toward their traditional spot near the top of the league. The Ambassador League is deep, but Ontario Christian could benefit from the league’s expected parity. END_OF_DOCUMENT_TOKEN_TO_BE_REPLACED 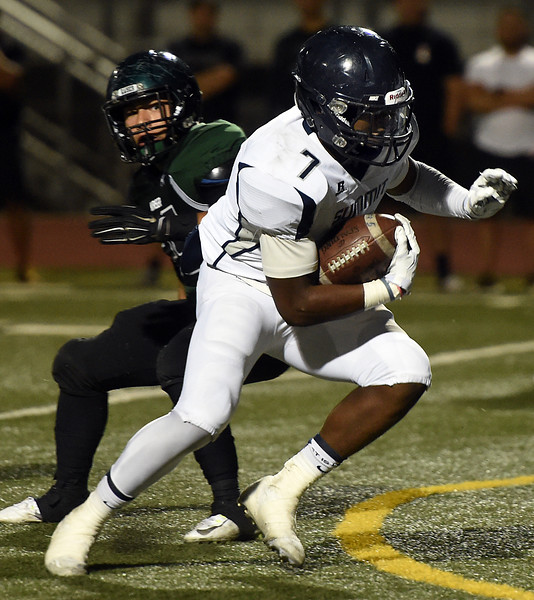 “With our three guys at the skill positions, we’re pretty loaded,” Matheny said. “But we were talented last year too and we were only able to pull out six wins.”
END_OF_DOCUMENT_TOKEN_TO_BE_REPLACED

END_OF_DOCUMENT_TOKEN_TO_BE_REPLACED

Vinny Fazio was hired as the new football coach at Murrieta Valley, multiple outlets are reporting, after revealing Thursday that he resigned following one spectacular season at Eisenhower.

Fazio began searching for other opportunities after he received a pink slip from Eisenhower in March.

Though plenty who are pink-slipped end up with a job the following year, it was Fazio’s first such experience with one. A player at Fontana and first-year coach for a the 7-3 co-Citrus Belt League champion Eisenhower team last season, the last thing Fazio wanted to do was leave.

“That was never my plan. I was going to be there 10 to 15 years,” Fazio said. “I had people telling me at the district level and the school-site level ‘You probably need to look for other jobs.’ I love the kids. I feel really bad. On my end, I didn’t have a choice.”

Ayala athletic director Warren Reed made one last plea with five proposals remaining at Monday’s Mt. SAC area releaguing meeting, only one of which included his school in the Baseline League. Apparently it fell on deaf ears.

Ayala and Chino Hills joined Etiwanda, Los Osos, Rancho Cucamonga and Upland in perhaps the closest thing we’ve seen to a super-league in the Inland Valley in the last 10 years. There is no doubt in my mind Ayala ended up in the absolute worst situation of any school in the Inland Valley, joining a league where the other five schools have an enrollment of at least 3,000 to Ayala’s 2,500. Those other five school’s however, will be fascinating to watch as Chino Hills brings strong football, basketball, baseball, softball and soccer programs.

Alta Loma was the big winner, moving to a Mt. Baldy League that is now weaker sans Chino, a two-time football league champion in the last three years. Bonita knew it was leaving the Hacienda League, but was thrilled to land in the Sierra as opposed to the Baseline, where two of the last five remaining proposals placed the Bearcats.

Here is a look at all the new leagues in the Mt. SAC area beginning in the fall of 2014: