REDLANDS EAST VALLEY 2, LA QUINTA 0 >> Vashti Knight had 14 kills for the Wildcats in the Wildcats Classic Gold Bracket finals over the Blackhawks.
Kyra Denmark added seven kills and Diana Maile had 17 assists. Maile posted 117 assists and 32 digs throughout the tournament and was named as the tournaments MVP. 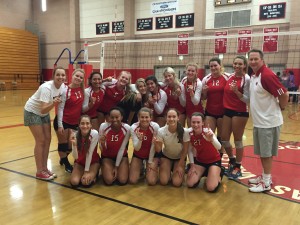 END_OF_DOCUMENT_TOKEN_TO_BE_REPLACED

Many of the top girls volleyball teams in the CIF Southern Section will be in Las Vegas this weekend for the 64-team Durango Fall Classic, which will be held at four high schools.
TX Body: And several of the top teams from San Bernardino County will be there, including preseason Sun Top 10 teams Redlands East Valley, Chino Hills and Rim of the World. Los Osos is a fourth county team in the tournament.
“I’m interested to see how we compete against bigger schools.” Rim coach Linda Pattison said.
All three of the county ranked teams, could end up facing each other if the seedings hold.
All three are seeded third in their four-team pool, so if they all went 1-2 in their pools on Friday they’d have a chance to play each other in Classic qualifying round Saturday morning or in the Classic Division Bracket or Contenter Division Bracket later on Saturday.
Rim is the highest seeded of the four county teams, seeded 40th overall, followed by REV (43rd), Chino Hills (47th) and Los Osos (57th). Los Osos is seeded fourth in its pool.
Pattison said Rim’s 14-25, 20-25, 25-16, 25-21, 15-12 win last week over REV improved the Scots’ seeding for the tournament.
“It moved us up more than it moved them down,” she said.
Rim’s win also did a lot for her team beyond tournament seeding.
“REV’s a good team and it shows we’re capable of beating a team like that,” she said.
In the match, Pattison said middle blocker Tia MacGuire, who Pattison did not expect to play due to an ankle injury, provided a big lift by playing in Sets 3, 4 and 5. They also had regular standouts Maddie Newcombe and Chloe Castillo (17 kills).
Rim usually schedules a tough preseason, so beating REV could help Rim in this tournament, in REV’s tournament Oct. 17 or in the CIF-SS playoffs.
Rim will play Honolulu ‘Iolani, Vista Murrieta and Los Osos in pool play on Friday.

There were a few things I wanted to mention, following up from Friday night’s Jurupa Hills 31-21 victory over Rim of the World in a Mountain Valley League showdown.