Does it seem like there is an endless number of awards for some of our area softball players? It does to me, I guess because our softball is so good in this area. This might be one of the last, the Cal-Hi Sports all-state team: 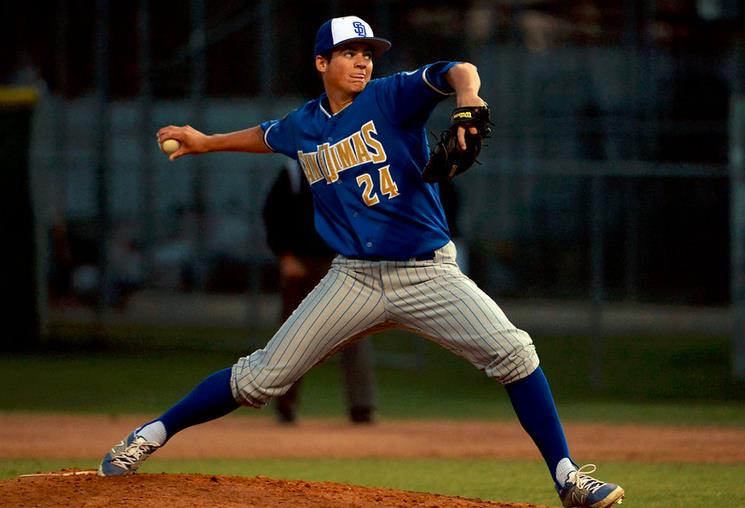 CalHi Sports is in the process of doling out its postseason honors for the springs sports.

It has published a list of players from each section up for All-State honors.

Here is the list of Southern Section candidates from the Daily Bulletin/Sun coverage area.

They’re listed in alphabetical order with grade, position and school.

This is Part 1 of the all-state football teams. I will post the rest of them when I get a chance Wednesday.

WR Trent Irwin (Hart, Newhall) 6-1, 180, Sr. It’s pretty obvious that the state’s new career record holder for receptions (285) and yards (5,272) needed to be first team all-state. Irwin also had a spectacular senior season with 106 catches for 1,974 yards and 22 TDs. Already named as the L.A. Daily News Player of the Year, Irwin recently decided against joining teammate QB Brady White at Arizona State and will be headed to Stanford.

One of the finalists for our Mr. Football State Player of the Year, McKinley did take home the honor as the top junior in the state after catching 97 passes for 2,062 yards and 25 touchdowns this season for the Huskies. Nearly breaking the state record for receiving yards in a season, he stood out especially in the postseason with 50 catches for 1,012 yards and 11 touchdowns.

We don’t always pick a tight end for first team overall, but this year we are with Petite. It helps that in Campolindo’s win over El Capitan of Lakeside in the CIF Division III state bowl game that Petite was the best player on the field. He ended the season with 37 catches for 969 yards and nine TDs. Petite, who played in the Under Armour All-American Game and who is headed to USC, also made his presence known for Campolindo as a defensive end.

OL Jack Dreyer (Serra, San Mateo) 6-8, 290, Sr. Serra head coach Patrick Walsh said that Dreyer is the best lineman he’s had so far for the Padres. He’s one of the best we’ve seen from the CIF Central Coast Section in several years as well. Dreyer has only been playing football for three years, but with his size and agility he was heavily recruited. He will play next at nearby Stanford.

OL Tevita Halalilo (Rancho Verde, Moreno Valley) 6-3, 330, Sr. Not just one of the top offensive linemen in the state but Halalilo is regarded one of the state’s top players regardless of position. The mammoth standout will be headed to play at UCLA next season after he committed to the Bruins last year. Halalilo was All-Inland Empire and All-CIFSS West Valley Division.

OL Zach Okun (Newbury Park) 6-4, 310, Sr. Before his outstanding season, Zach already had his college future determined as he committed with the Oregon Ducks in March. Okun already has gotten numerous honors. His blocking helped Newbury Park pass for 3,707 yards and rush for 2,568 yards.

OL Darrin Paulo (Grant, Sacramento) 6-6, 320, Sr. He’s got the athleticism to throw the discus more than 170 feet and had a terrific season for the 14-1 Pacers. Paulo was dominant in all three games we saw him and he was on the Sacramento Bee’s All-Metro squad. Oregon, Nebraska and Washington State appear to be in the lead to sign him.

OL Cole Smith (Mission Viejo) 6-4, 280, Sr. All you need to know about Smith being a first-team all-state choice is that he was selected as the CIFSS West Valley Division offensive player of the year. That’s unheard of for a lineman. Smith, who plays center, committed to USC last summer. He is the son of six-time Pro Bowl center Doug Smith. Cole helped Mission Viejo win the CIFSS West Valley Division title.

QB Jake Browning (Folsom) 6-2, 185, Sr. It was no shock after his record setting season and career that he was named as our Mr. Football State Player of the Year. Browning completed a legendary prep career with 16,689 yards passing and a national record 229 TD passes. He had 5,704 yards as a senior with a national record-tying 91 TD passes. Folsom also went 16-0, won the CIF D1 state title, finished No. 5 in the final FAB 50 national rankings and set a state record with 915 points scored.

RB Antoine Custer (De La Salle, Concord) 5-8, 175, Jr. Picking Custer this high may be a surprise to some, but by the end of the season he was the Spartans’ top honors candidate and they were after all the No. 1 team in the state. Custer also was named the Contra Costa Times East Bay Player of the Year (which includes Clayton Valley’s Miles Harrison). He barely played into the second half of most games, but still ended with 1,942 yards and 26 TDs. Custer also averaged 10.4 yards per carry, played some on defense and returned punts and kickoffs. He is a cousin of the late Terrance Kelly.

RB Miles Harrison (Clayton Valley, Concord) 5-11, 200, Sr. While there are some differences in his numbers this season depending on the source, there is no confusion about how talented Harrison was with the ball in his hands. He rushed for 2,709 yards and scored 34 touchdowns despite being limited with injuries. Already named as a finalist for Mr. Football State Player of the Year, he put on a show every time we saw him in person this season. Harrison carried the ball 50 times for 324 yards and three touchdowns in the 34-33 loss to Redlands East Valley in the CIF Division II state bowl game.

PK Kevin Robledo (Westlake, Westlake Village) 6-0, 175, Sr. Since his sophomore season with the Warriors, the one thing he does among the best in the nation has been to make field goals. Robledo already was named a U.S. Army All-American and has received multiple all-area honors. He was 45 of 46 on PATs this season and had 11 field goals. For his career, Robledo set a new state record with 42 field goals. He also went 109 of 111 on PATs during his career.