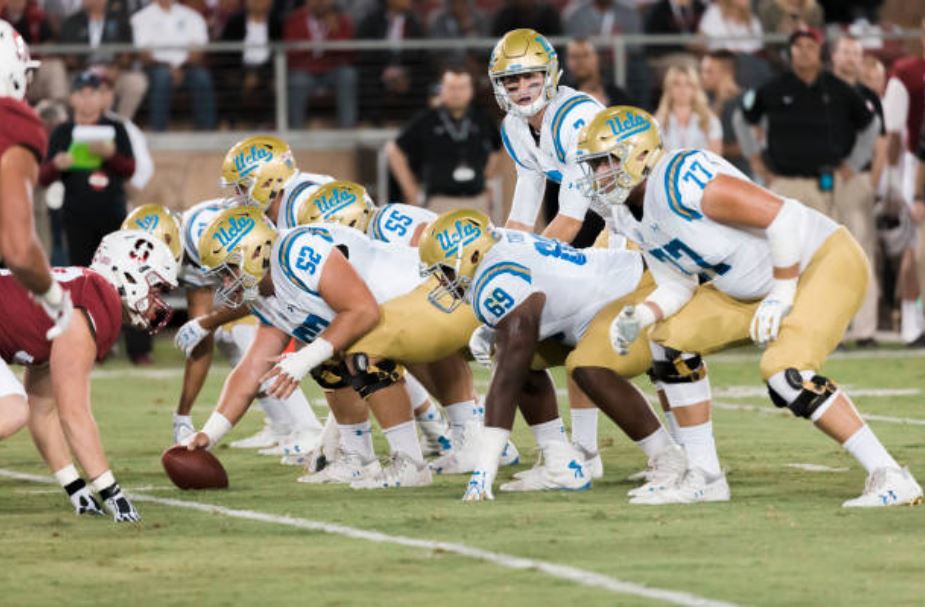 The reality was just starting to hit Kenny Young this week. Tuesday will be the final time he puts on his UCLA jersey for a game.

The Chip Kelly era is steadily creeping in as well as the new head coach has hired three new defensive coaches and signed his first group of commits. Young was a critical piece for the Jim Mora era, but a new chapter of UCLA football awaits on the other side of the Cactus Bowl.

Here’s a look at the losses UCLA is facing, what their impact to the team was this year and an early look at what could lie ahead with Kelly at the helm. Each position group is broken down by seniors (in yellow) and non-seniors (in blue). Quarterback is not included as the magnitude of the potential loss (Josh Rosen) is pretty obvious if Rosen decides to forgo his senior year.

END_OF_DOCUMENT_TOKEN_TO_BE_REPLACED

UCLA Bruins head coach Jim Mora with his team in the tunnel prior to a NCAA college football game against the USC Trojans at the Los Angeles Memorial Coliseum in Los Angeles, on Saturday, Nov. 18, 2017. (Photo by Keith Birmingham, Pasadena Star-News/SCNG)

Jim Mora set out to start a “Bruin Revolution” when he came to UCLA. Nearly six seasons and a $75-million football facility later, the university is looking for someone to start a new wave.

Mora had the most successful first three years of any UCLA head coach, winning 29 games in that span. But disappointing results in the past two and a half years cost the 56-year-old head coach his job on Sunday.

Here’s a look at what Mora’s teams accomplished compared to the previous two head coaches, Rick Neuheisel and Karl Dorrell. Mora’s teams are highlighted in dark blue, Neuheisel’s teams are yellow and Dorrell’s teams are bright blue. Graphs are broken down by wins in each year and different offensive and defensive stats. Click through the categories using the drop-down menus or the arrows. END_OF_DOCUMENT_TOKEN_TO_BE_REPLACED 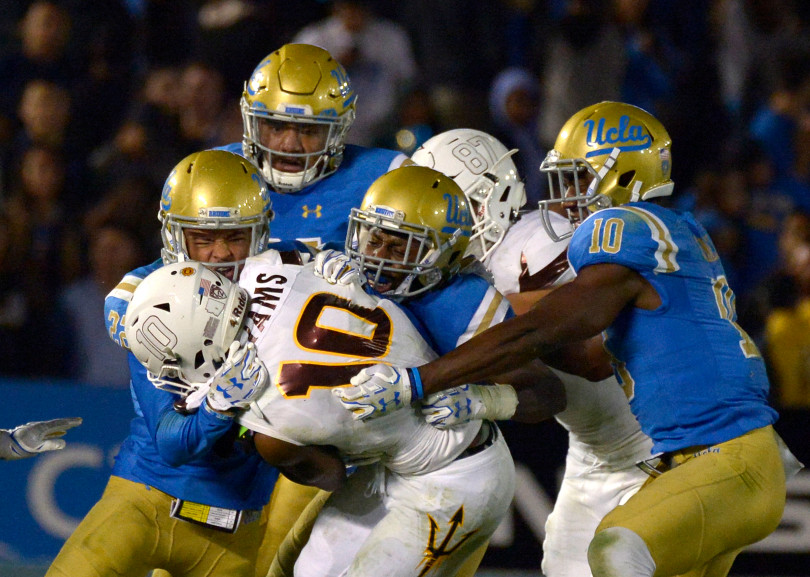 The UCLA head coach pointed specifically to a decreasing number of big runs allowed in recent weeks. Indeed, the Bruins have allowed only five runs of 21 or more yards in the past four games and none longer than 37 yards. This defense allowed at least one run of 66 yards or longer in each of the first four games of the year.

So if UCLA has finally been able to cut down on the explosive plays, then why aren’t the Bruins taking bigger steps forward when it comes to its rushing defense?

Here’s a look at how teams have gained yardage on the ground against UCLA this year. Each game is broken down into runs of different length (from negative-yardage rushes to rushes of 21 yards or longer) and each bar represents the percentage of rushes during that game that went for each distance. For example, 12.6 percent of Texas A&M’s runs against the Bruins went for negative yardage (as shown by the first bright yellow bar).  END_OF_DOCUMENT_TOKEN_TO_BE_REPLACED 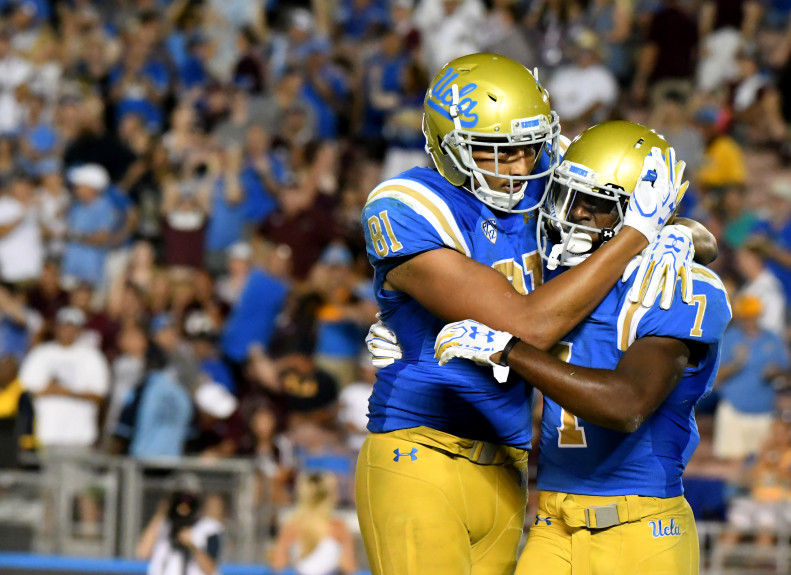 Major injuries have hurt UCLA on both offense and defense. They’ve hit every position and claimed key pieces of the team for the rest of the year. Head coach Jim Mora cites the injuries as a major factor for UCLA’s struggles this season, especially on defense.

So how exactly have they all affected the team’s production on the field?

Here’s a look at which players have been kept out of games due to injury, which games they missed, overlayed with graphs showing UCLA’s offensive yards per play and the opponent’s yards per play in each game: END_OF_DOCUMENT_TOKEN_TO_BE_REPLACED 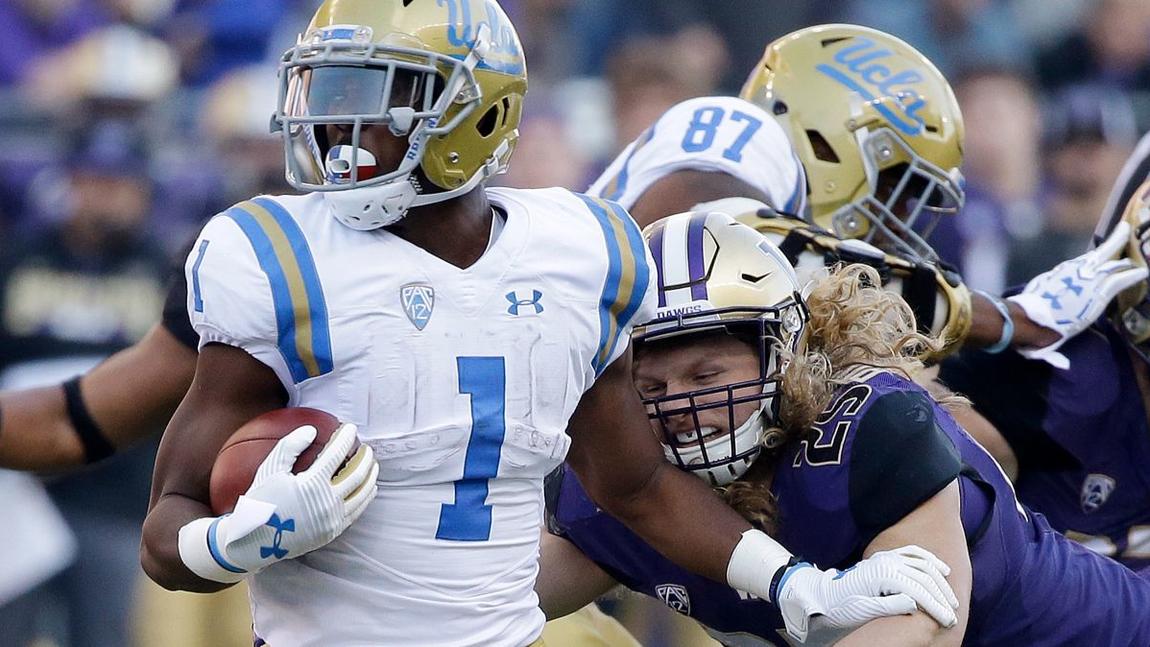 Josh Rosen‘s right arm can do a lot of heavy lifting for the UCLA offense. But with the star junior quarterback’s status still in question for Friday’s game against Utah, the Bruins are going to need other weapons to step up if backup Devon Modster ends up making his first career start.

“To be able to run the ball would give a lot of confidence to the rest of the offense and him (Modster) as well,” the junior from Texas said. “So we want to get the run going, be able to protect and I think Devon will be able to make a lot of good plays out there on Friday.”

Here’s a look at which running backs have been carrying the offense so far and how much the rushing game has handled:  END_OF_DOCUMENT_TOKEN_TO_BE_REPLACED