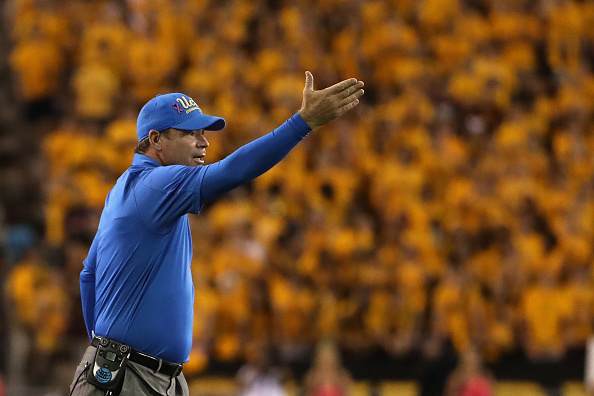 After speaking with the media on a conference call Thursday, UCLA head coach Jim Mora jumped on the Petros and Money show to talk about Jedd Fisch‘s hire, not playing in a bowl game and the return of Mique Juarez.

Mora, when speaking of the offensive philosophy Fisch will bring to the team, continued to emphasize his dislike of labels when it comes to football. Don’t call UCLA’s new scheme pro-style, don’t call it spread. Just call it multiple. He also expanded on his comments about spread teams not winning national championships, saying that many teams used elements of the spread, but didn’t exclusively run that system, such as Florida and Texas, which both used tight ends.

After missing a bowl game for the first time in his UCLA tenure, Mora said he would sometimes “peek” at the bowl games this season, but admitted “it stung very, very badly to not be in a bowl game.”

Mora confirmed that Juarez will rejoin the team Monday morning at 7 a.m. in the team’s first meeting of winter quarter. Juarez posted on social media on Wednesday “I’m back.”

Listen to the full interview below:

I’m back …great opportunity to do something better. Painter by @ceaches_ ❤️️

UCLA linebacker Mique Juarez could be on track to return to the field soon, by the looks of a recent Instagram post from the freshman.

Juarez has not participated in any football activities since last August when he took a sudden leave of absence due to personal reasons. During that time, he attended classes and remained steadfast in saying that he wanted to return to the team in the future when the time was right. He remained in contact with the coaching staff during his absence with the intention of continuing his football career at UCLA.

Does Josh Rosen need a Heisman type year for UCLA to make the College Football Playoff (2016 or 2017)? How do you think Rosen would answer the first question?

I think the College Football Playoff is for UCLA this year, no matter what types of numbers Josh Rosen puts up. With the parity in the Pac-12 and some bad nonconference losses (looking at you, Washington State), it’s going to be hard for any Pac-12 team to get into the Playoff, especially UCLA with its loss to Texas A&M. For next year, that’s a tough one to answer. I can barely think past this week, let alone to next year. Rosen will definitely be expected to put up big numbers next year as it will be his second year in his tailor-made offense that will have a few more returners. The defense takes a big hit next year because they’ll lose several seniors including Takkarist McKinley, Eli Ankou, Jayon Brown and Fabian Moreau. If he has a good year this year, Eddie Vanderdoes could be gone too. So maybe next year, the roles will be reversed and it’ll be up to an experienced offense to carry the defense. But really, that’s a tough question to answer right now for next year.

As for how Rosen would answer that question, that’s another interesting question. He might say something like he expects the best from himself every game and if he executes the way he can, then the team can accomplish whatever it wants (but he won’t specifically say it wants). He could also say that it’s a quarterback-driven sport, point out that rarely does a team make it to the Playoff without a star on offense, and he’s expecting himself to be that star for the Bruins, but won’t answer directly yes or no. He obviously has extremely high expectations for himself and if you asked him, he would want to be putting up Heisman-type numbers just because he believes he personally can, not because he believes he needs to for his team to succeed. But he’ll keep the team’s interests first, always.  END_OF_DOCUMENT_TOKEN_TO_BE_REPLACED

Freshman linebacker Mique Juarez said he intends to return to the UCLA football team in the future. Photo by Brad Graverson // Daily Breeze

So here’s the Mique Juarez update: He’ll be back. Not sure when at this point, but he does plan to be back. He said he’s currently working with a psychiatrist who is helping him work out his personal issues and he’s planning to start classes this week.

McKinley has since deleted the tweet, but you can tell that there’s a little bit of animosity. Freshman linebacker Lokeni Toailoa seems to be on #TeamTakk as he posted this tweet in response to McKinley’s.

McKinley also sent this tweet after UCLA’s victory on Saturday 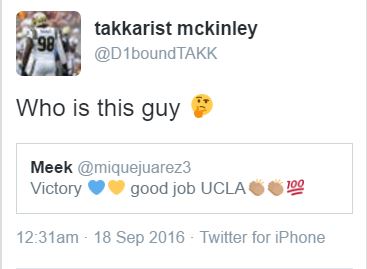