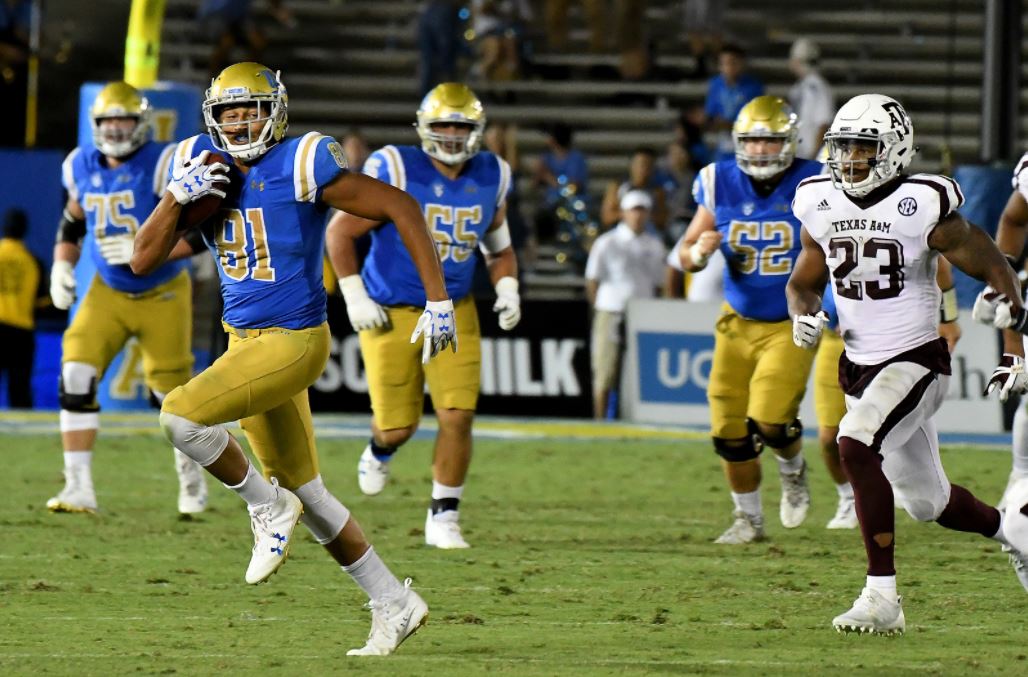 UCLA tight end Caleb Wilson (81) catches pass for a first down against the Texas A&M Aggies in the fourth quarter during a NCAA college football game at the Rose Bowl in Pasadena, Calif., Sunday, Sept. 3, 2017. UCLA won 45-44. (Photo by Keith Birmingham, Pasadena Star-News/SCNG)

Tom Bradley says its the big plays that demoralize a defense. The defensive coordinator’s system is built on not ever giving up those knockout punches, but during last Saturday’s game against Texas A&M, UCLA got hit with a flurry of big plays as the Aggies piled up a 34-point lead.

Chunk plays, which UCLA’s live stat program defines as runs of 10 or more yards and passes of 15 or more yards, played a pivotal role in Texas A&M’s big lead and UCLA’s miraculous comeback. While the teams had almost the same number of chunk plays overall (UCLA had 15 and Texas A&M had 14), the Bruins saved their best for last to engineer the comeback: END_OF_DOCUMENT_TOKEN_TO_BE_REPLACED 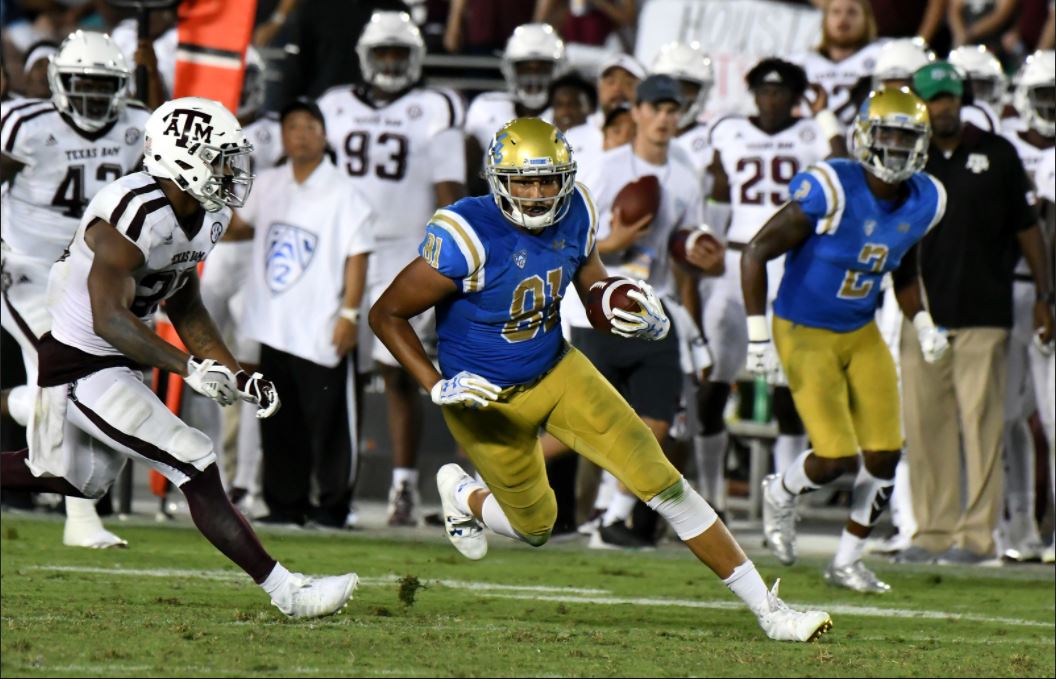 Caleb Wilson led the Bruins with 15 catches and 203 yards in their 45-44 win over Texas A&M. (Photo by Keith Birmingham, Pasadena Star-News/SCNG)

UCLA’s 34-point comeback against Texas A&M was the biggest in school history and the second biggest in NCAA history. It was a wild night at the Rose Bowl to say the least. UCLA set up the dramatic victory with a poor first half during which the offense looked like its inefficient 2016 counterpart and the defense got gashed for long runs up the middle. UCLA secured the dramatic victory with a potentially career-defining performance from quarterback Josh Rosen, who threw for 491 yards and four touchdowns (both career highs) and moved into a tie with Cade McNown for the most 300-yard passing performances in UCLA history. 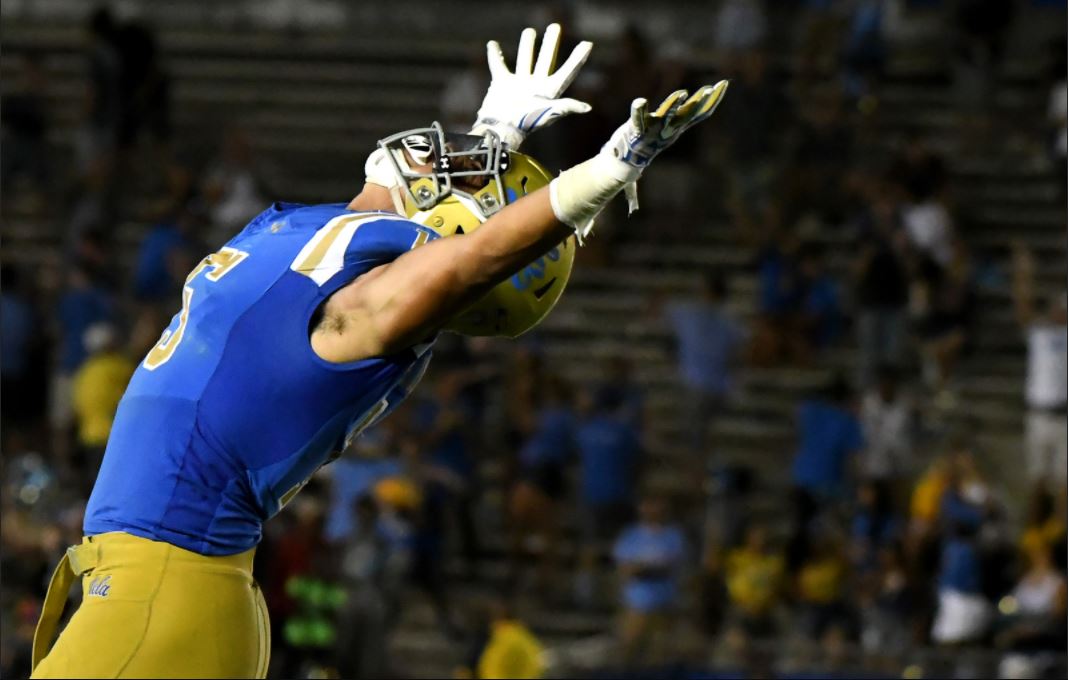 UCLA players and coaches quickly took to Twitter to celebrate their 45-44 comeback over Texas A&M on Sunday night. The Bruins were down by 34 points with 4:08 to go in the third quarter of their season opener, responded with 35 unanswered points and notched the biggest comeback in school history. Surely it was a night to celebrate for the Bruins, but players were also committed to ensuring that this isn’t the only high point of the year.

“It’s a big win,” safety Adarius Pickett said. “First game, season opener at home, being that we were in a dog fight with them last year, it feels really good. But we gotta chalk this one up as a win and get ready for Hawai‘i next week.”

Here’s how players, coaches and even former players celebrated on Twitter:

Ellie fell asleep on the field but in the morning I’ll tell her she wasn’t dreaming. #4sUp #1-0 #Believe pic.twitter.com/HizkogX2mN

Didn’t have an ounce of doubt. I love this team! Go bruins !!

END_OF_DOCUMENT_TOKEN_TO_BE_REPLACED 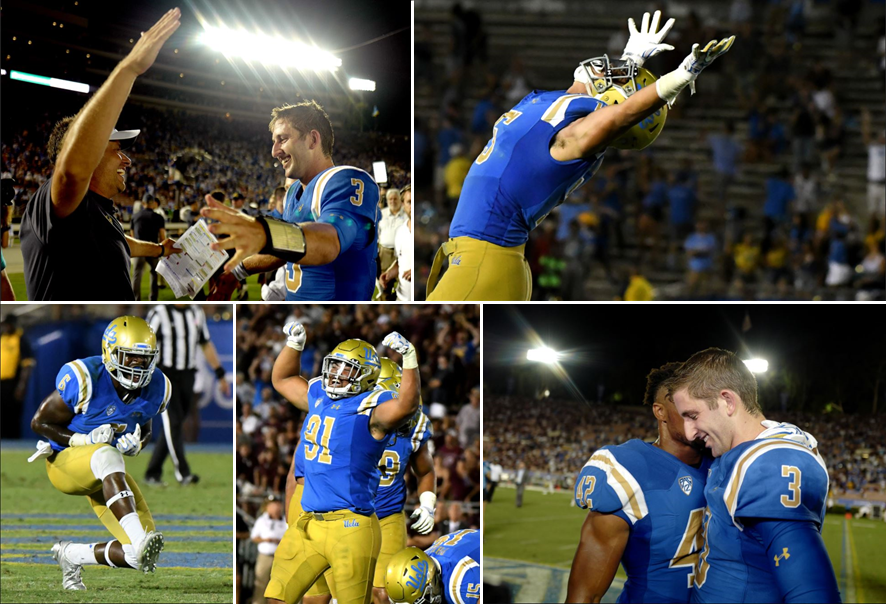 Click on the photo above (or HERE) to see photos of UCLA’s 45-44 win over Texas A&M on Sunday at the Rose Bowl.

Defensive coordinator Tom Bradley talks about UCLA’s 45-44 win over Texas A&M, what a “brave pill” is and what he saw from his team at halftime.