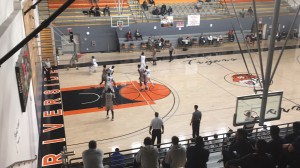 RIVERSIDE >> Charles Callison and the San Bernardino Valley Wolverines defeated the Antelope Valley Marauders, 64-57, to advance into the second round of the Riverside City College Holiday Tournament. Callison scored 17 points and had three rebounds for the Wolverines, while teammate Todd Lewis contributed with 12 points and seven rebounds.“We really persevered from adversity tonight,” said SBVC coach Quincy Brewer. “We made some poor choices on offense and that is something we just don’t do.”Brewer also mentioned that the Marauders style of play bother the Wolverines’ defense early in the game.“Their defense was bothering us at first,” Brewer explained. “They were very quick and athletic.”Callison managed work around the defense scoring eight of his ten points in the final two minutes of the first half.The Wolverines defense was tested by the Marauders offensive attack that attempted 28 three point attempts.Tim Gilmore scored 14 points and made four of his eight attempted shots from the three point line for the Marauders. Adrian Francis contributed with 11 points and was 3-for-8 from the three point line.

Lawrence White scored 12 of his 15 total points during the second half for the Marauders.

White hit a three point shot for the Marauders with 38 seconds left in the second half to bring the game within two points of the Wolverines but could not pull ahead for the win.The Wolverines will play Fullerton College at 3 p.m. Thursday in the RCC Wheelock Gym.