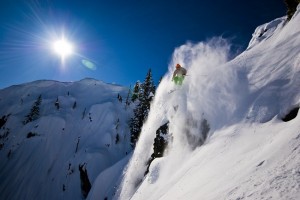 Catching some air off a peak at Red Mountain Ski Resort in British Columbia. (Photo by Francois Marseille Courtesy of Red Mountain)

The Kootenay mountains are famous for the light, dry snow the region gets. Red Mountain Ski Resort gets more than 300 inches of light powder annually. Add in its 2,919 feet of vertical and you’re talking lots of steep and deep.

Powder days are nearly every day at the ski resort located near Rossland, a scenic mining town in British Columbia. Red Mountain added another mountain this winter.

“Not only does the expansion increase Red’s skiable terrain by about 1,000 acres, it also adds wide terrain variety — from groomed cruising runs to tree glades and alpine chutes,” explained Chris Cushing of Snow Engineering Group, one of the ski resort industry’s design firms.

We decided to check out this hidden gem on a ski trip last year. It takes a little work getting to Red from Los Angeles, but it is well worth the effort.

First, we flew to Spokane, then jumped on a shuttle for a two-and-a-half-hour drive north across the border. Customs officials in Canada carefully checked our passports and questioned us about our ski trip. (Be sure all your travel documents are in order or you’re not getting in.)

Fortunately, the route proved easy to follow with no major mountain passes to negotiate in the softly falling snow. Soon we made it to the base of the mountain, where we were staying in the Slalom Creek condos. 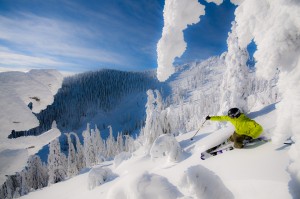 Many call it the last great undiscovered ski resort in North America. And with its latest expansion, Red Mountain certainly is poised to become one of the largest.

The British Columbia resort is adding another mountain and 1,000 acres of terrain. That’s on top of the two mountains and 1,685 acres that it already has.

“The scale of this expansion is a true game-changer for Red Mountain Resort and for the community of Rossland,” said resort CEO and owner Howard Katkov of San Diego. “We’ve consciously kept a low profile while we diligently readied ourselves for this massive expansion.”

Katkov said the resort management has been improving the facilities and accommodations with a $50 million investment over the last eight years.

The addition of Grey Mountain alone is close to the size of Mt. Baker Ski Area in Washington. The total acreage will make Red larger than Jackson Hole, Wyo. And the resort will join the top 3 percent of North American ski resorts with 2,682 acres of skiable acres.

It’s a winter wonderland at Jackson Hole Mountain Resort.  Over 2.5 feet of snow have fallen this week to create a Christmas paradise for skiers and riders visiting the Tetons.

Snow totals are almost 13 feet season to date, allowing Jackson Hole to lead the Rocky Mountains in snow conditions for the season.

“The last few days have been a true Christmas gift, and I have never seen guests and employees more excited about the holiday season,” said Jackson Hole President Jerry Blann.

“We feel very fortunate to have such great conditions for our guests,” Blann added. 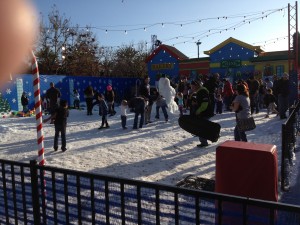 At Holiday Snow Days in Fun Town you and your family can tube down a snow slide, build a snowman using LEGO models of carrots and other fun pieces and test your aim by throwing snowballs at targets.

Along with the snow-filled fun, Fun Town is also the new home of the world’s largest LEGO Christmas tree – 30-feet-tall and made of more than 245,000 DUPLO bricks! BUY TICKETS by Dec. 31 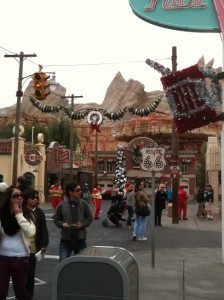 Cars Land has lots of adorable decorations for Christmas.

At Disney’s California Adventure, you’ve got to see the decorations in Cars Land. They’re adorable with whitewall tires for wreaths, snowflakes made of socket wrenches and trees decorated with hubcaps. So creative.

The new “World of Color Winter Dreams” show is also fun. Get your Fast Pass early (near Grizzly Rapids) for a prime spot (though if you’re short like me, all you see is half the show the top half!). But the music is good, including songs from this winter’s hit movie, “Frozen,” and the colors are lovely.

Wear your jacket. If the wind blows you might get wet, because the images are projected on a sheet of water. 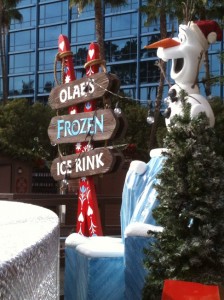 In Downtown Disney, go skating at Olaf’s Frozen Ice Rink, then warm up with goodies from the Winter Village. Both are near the AMC Theater.

There’s still lots of holiday cheer at the Merriest Place on Earth. 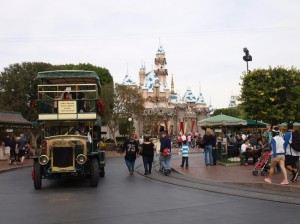 Christmas may be Wednesday, but the holiday season continues for three more weeks at the Disneyland Resort. Holiday decorations will be up through Jan. 6 at both parks and Downtown Disney.

“It’s a small world” holiday sees Disneyland’s classic ride dressed for the season with lights outside and decorations inside. It’s my favorite time to ride it because the infamous Small World song alternates with “Jingle Bells” and, in the big finale, “Deck the Halls.”

That helps keep the tune from latching onto your brain. If you’re lucky, your boat will pass the Little Mermaid in time to hear her singing the undersea tune, “Jingle Shells.”

Outside Small World is an excellent place to watch the nightly park illumination. Ask a cast member what time they will be turning on the lights, then get a good spot in front of Small World or on Main Street to see the magic happen.

Speaking of magic, Sleeping Beauty’s Castle is covered in snow and glittering ice, which looks particularly beautiful under the lights. Every night, after the “Believe … in Holiday Magic” fireworks show, it snows on Main Street. That’s Disney magic.

Oh, and at midnight on Dec. 31, they will present New Year’s Eve “Fantasy in the Sky” fireworks spectacular that’s in addition to the Holiday Magic show at 8:30 p.m.

Other holiday specials include “A Christmas Fantasy” parade and Haunted Mansion Holiday. If you like “Nightmare Before Christmas,” now’s the time to visit Haunted Mansion and see what Jack Skellington and his crew have done with the place. Also, take a Jingle Cruise it’s the first holiday makeover for the Jungle Cruise, with all new jokes!

Ken Burns’ movie “Yosemite: A Gathering Of Spirit,” celebrates the early park stewards, including the creator of New York City’s Central Park, Frederick Law Olmsted, who funded the park’s first biological survey out of his own pocket. 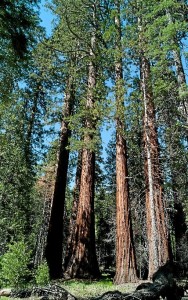 Script writer Dayton Duncan said the October shutdown of the federal government reminded the American people once again — and the members of Congress who voted for the shutdown — of the value of America’s national parks, monuments and forests.

From 1864 to the present, even lands set aside are constantly threatened and need heroes to fight for them, they said.

“It helps to understand the kind of vigilance required to maintain a national park. It is like liberty itself,” Burns said. “Once you’ve created it, it doesn’t mean it is assured forever.”

Scientists are concerned about the effect of global climate change on the trees, snowmelt and wildlife in Yosemite and other national parks. Burns said his movies don’t include references to man-made damage to parks because he prefers not to “preach to the choir” but rather tell a story.

When asked about new calls to restore Hetch Hetchy, the twin to Yosemite Valley taken by San Francisco and filled with water while Yosemite was a national park, Burns said he favors its restoration.

“It’s a complicated question,” he began. “That is for many people a very painful wound. It killed John Muir. But it’s nice there’s a developing groundswell to see what Muir called the rarest of mountain temples.” 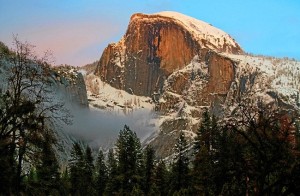 Without the idea of preserving wildlands that started June 30, 1864 during the Civil War, when Abraham Lincoln signed the Yosemite Grant, there would be no Yellowstone, technically the nation’s first national park. There would be no cathedrals of earth and stone, as Europeans call Yosemite, Zion, the Grand Canyon, etc.

In a gimmick taken from the holiday movie “It’s a Wonderful Life,” Burns described what some parks would be like without that first act of conservation in 1864. Like the angel who showed George Bailey what would happen to his hometown if he were never born, Burns said without the national parks: “Zion would be gated. Yellowstone would be a down-on-its-luck resort called ‘Geyser World.’ ”

Nearly 150 years ago, with 11,000 men dying each day and a nation on the verge of splitting apart, Lincoln signed the Yosemite Grant, which gave the land to California.

But without funding or enforcement, some of the giant sequoias of Mariposa Grove were logged and Alpine Meadows became denuded by flocks of grazing sheep from poaching herders.

It took visionaries such as the Scottish-born John Muir and later, President Theodore Roosevelt, to persuade Congress to make Yosemite a true national park.

San Francisco during the holidays is like a 49 square mile array of gift-wrapped delights.   All the holiday lightings and decorations, special events and performances, tours and treats will easily fill more than an average 48 hour weekend.

The San Francisco Travel Association is encouraging visitors to plan on spending at least an extra hour – if not an extra day – reveling in San Francisco’s holiday spirit.  To make it even more inviting, they are offering “49 Hours of SF: Holidays” hotel deals featuring deeply-discounted rates when booked at www.49HoursofSF.com.

Visitors who stay three or more nights at participating hotels can receive up to 25% off the entire stay. This offer is valid through March 31, 2014.

Find Your Magic Hour – Experience the beauty and marvel of San Francisco Ballet’s international cast of world-class dancers in Nutcracker, a San Francisco tradition since 1944. Don’t miss this magical performance this December at the War Memorial Opera House. Find other magical moments recommended by the Sugar Plum Fairy at http://www.sanfrancisco.travel/shop/holidays/Sugar-Plum.html

Find Your Sparkle Hour – Kick-off the holiday season at PIER 39 with the lighting of their majestic 60′ holiday tree, adorned with hundreds of festive ornaments and twinkling lights. Find more sparkling events to light up your hour at http://www.sanfrancisco.travel/shop/holidays/Lover-of-lights.html.

Find Your Happy Hour – Enjoy extended hours all season long at Westfield San Francisco Centre.  With 165 stores to choose from, Westfield has something for everyone on the holiday shopping list. More shopping ideas can be found at http://www.sanfrancisco.travel/shop/holidays/The-Shopping-Elf.html

The Creatively Curious – The guide to San Francisco’s best art museums, including the Asian Art Museum.

The Theatrical Carouser – All the city’s a stage for comedy, drama, melodies and dance, including the forever-festive Beach Blanket Babylon.

The Cheerful Caroler – The music lovers guide to the holidays.

The Adventurous Merrymaker – Great ways to get out for some fresh air along with your holiday fun.

Ken Burns and Dayton Duncan view Yosemite as the birth of an idea that grew into America’s national parks, which led to saving animal species from extinction, such as the bald eagle, and the bison and wolves of Yellowstone.

The national parks have also led to a better understanding of forest fire ecology, Duncan said. But balancing preservation with recreation is always going to be hard, they said.

“Yes, we want to preserve it and we want people to come to draw sustenance from it,” Duncan said, adding that Muir, who also wrote extensively about saving the San Gabriel Mountains, had a motto: The fight for conservation will go on forever.

Returning to Yosemite Valley to shoot the film “Yosemite: A Gathering Of Spirit,” after spending 10 years making the National Parks series, Burns found himself on a hike near Bridalveil Fall with his daughter when they saw a migrant family whose daughter, about the same age as Burns’ daughter, began dancing in and out of the fall’s mist.

He said the mountains and centuries-old trees “performed open heart surgery” on him, reminding him of his own childhood and family trips to the national parks and whose hand he was holding at the time.

“We were no different,” he said after seeing the Hispanic family at the fall. “All the differences — status, class, race — were erased. I felt gladdened by that,” he said.