Former UCLA tight end Chris Clark is no longer blocked from transferring to any schools outside of the Pac-12.

Clark, who appeared in just one game with the Bruins, told ESPN that head coach Jim Mora called him on Thursday and lifted the ban on Michigan, Michigan State and Ohio State.

“Coach Mora talked about it,” Clark said, “and they didn’t think it was right for them to block schools they aren’t playing next year so they aren’t blocked anymore.”

Ranked a five-star recruit in 2015, the New Jersey native is still restricted from transferring anywhere within the Pac-12 or any school that plays UCLA within the next four seasons. He told ESPN he is planning to visit North Carolina State, Pitt and Virginia, and is also interested in Maryland. 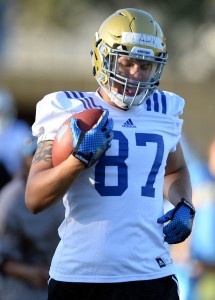 UCLA tight end Chris Clark left the team after just one game. The five-star prospect was one of the top recruits in the Bruins’ 2015 recruiting class. (Will Lester/Staff)

UCLA tight end Chris Clark no longer appears to be a member of the Bruins’ football team.

Clark was a five-star recruit whose decision to sign with UCLA was greeted with great fanfare on National Signing Day. However, he missed much of preseason training camp recovering from mononucleosis.

On Thursday night, Clark tweeted, “Feels great to be back in the 201,” referring to his New Jersey area code. He later deleted the tweet.

Multiple reports indicated that Clark has left the team entirely. On Sunday, head coach Jim Mora declined to address the player’s absence: “He did not travel with us yesterday. I’m not going to talk about Chris Clark right now.” END_OF_DOCUMENT_TOKEN_TO_BE_REPLACED

Five-star tight end Chris Clark has yet to practice with UCLA a week into training camp, but he could be ready by the Bruins’ season opener.

Head coach Jim Mora said on Saturday that the plan for Clark, who is suffering from mononucleosis, is for him to start doing some level of work next week. After that, he should be ready to play against Virginia on Sept. 5 at the Rose Bowl.

“That’s a tricky deal,” Mora said. “It’s more than just him feeling energy. They’ve got to make sure his spleen is OK.”

An enlarged spleen is one of the complications that can result from mononucleosis.

Mora also dismissed any chance of Clark sitting out the season entirely: “He’s playing versus Virginia. We didn’t bring him here to redshirt. I can promise you that.”

Offensive coordinator Noel Mazzone said earlier this week that without Clark, UCLA will implement a tight end role into its scheme with a combination of Thomas Duarte, Nate Iese and Colby Cyburt.

» UCLA has a clear-cut No. 1 option in Paul Perkins, who said his goals this season are to be the nation’s top tailback and to win a national championship. That’s allowing the Bruins to give even first-team reps with some of the newer players.

Two days into camp, the main beneficiary has been five-star running back Soso Jamabo. On Tuesday, he not only got a healthy share of time on the first and second string, but even took five or six snaps out of Wildcat.

Perkins generously compared Jamabo’s running style to that of Eric Dickerson on Monday, and offensive lineman Caleb Benenoch followed with some praise of his own: “Soso is just unbelievably talented. … I’m eager to see what he does in pads.”

Jamabo honestly hasn’t quite matched his recruiting hype on the field, but it’s still fairly early in camp and UCLA doesn’t need instant production from him. I wouldn’t be shocked to see him become more of a pass-catcher than a workhorse runner, but offensive coordinator Noel Mazzone said he doesn’t foresee any position changes for the 6-foot-3, 210-pound back.

“We’re kind of going back to the old Joe Fauria days, when we had that big joker,” Mazzone said. “We’re going to be able to put some things in that we haven’t been able to run the last couple of years, because of the lack of a guy at that position.”

» On what was arguably the quietest first day of camp I’ve seen yet in San Bernardino, the most significant news was probably tight end Chris Clark being sidelined by mononucleosis.

The five-star tight end was present at practice, but wasn’t in uniform and might not be again anytime soon. Head coach Jim Mora said Clark has had mononucleosis for “a couple of weeks” — which could be a sign that he’s in the recovery stage already, or that he still has most of the illness ahead.

A bit of armchair doctor-ing now: Symptoms of mononucleosis usually last a few weeks, but can also stick around for up to two months. Fatigue, sore throat, headaches and the like are obvious setbacks for any high-level athlete. What could be especially bad for Clark would be if he also suffers from an enlarged spleen, a potential complication of mononucleosis and one that would certainly keep him out of full-contact drills for a while.

Again, I don’t know the particulars of Clark’s health at the moment, so take this with a grain of salt. But even assuming that Clark’s symptoms subside by, say, the end of this week, that already costs a true freshman valuable time in spring camp. This could prove especially costly for Clark, whose skill set as a true tight end don’t fit neatly into UCLA’s existing offensive scheme.

If the Bruins do continue trying to build a role for their touted recruit to step into immediately, then they would have to do so using a combination of Nate Iese and former offensive lineman Colby Cyburt.

» The quarterback competition is more or less in the same spot as it was at the end of spring camp. Five-star recruit Josh Rosen still looks like the easy pick to win the starting job, and was responsible for the most impressive throw of the day when he uncorked a 40-yard touchdown to Eldridge Massington — a play that had two defenders colliding after missing the tackle. END_OF_DOCUMENT_TOKEN_TO_BE_REPLACED