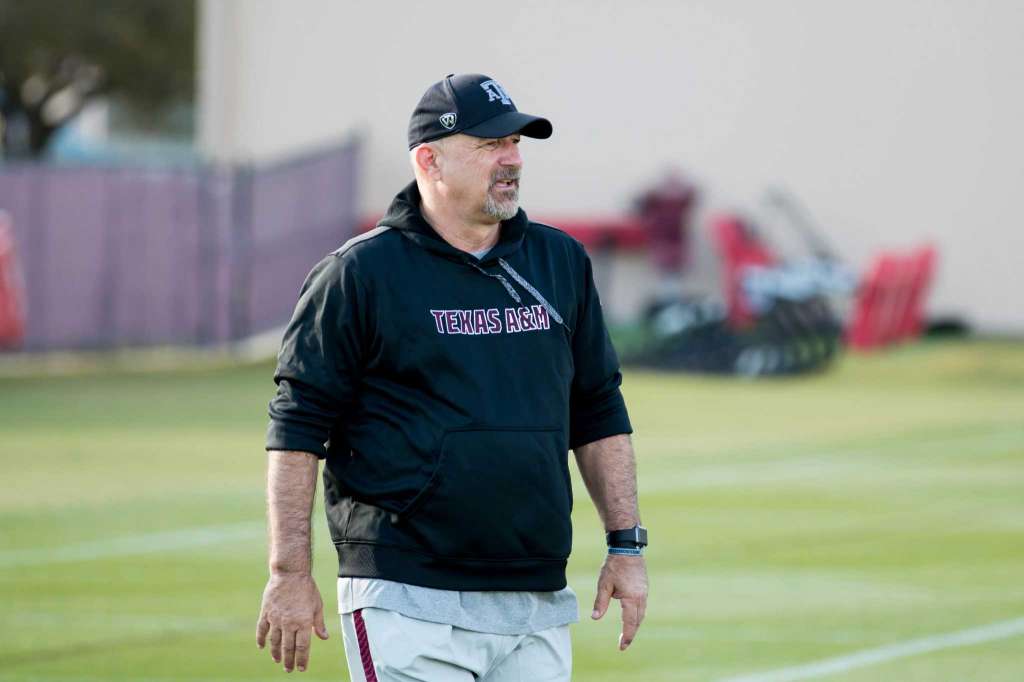 With Pac-12 Media Days wrapping up last week, the beginning of the end of the long football-less summer approaches. UCLA starts fall camp in three weeks and until then, we’ll spend some time looking at each of UCLA’s 2016 opponents. Let’s take it from the top with Texas A&M:

Both UCLA and Texas A&M fumbled down the stretch last year. The Bruins lost three of their last four games. The Aggies, who started 5-0, lost three of their last five and landed at 8-5 overall (4-4 SEC). It was Texas A&M’s second straight eight-win season after Johnny Manziel vaulted the Aggies into the national spotlight during his brief career. With two underwhelming seasons, head coach Kevin Sumlin is feeling a little heat in College Station. END_OF_DOCUMENT_TOKEN_TO_BE_REPLACED

The Aggies announced his hiring on Friday, with head coach Kevin Sumlin saying in a statement: “I have known Noel for many years and he is a great addition to our coaching staff. His experience is outstanding and he will do an excellent job of coordinating our offense.”

The two first worked together in the mid-1990s as assistants in Minnesota, and their relationship continued through football clinics.

The former UCLA offensive coordinator will open the next stage of his career against the Bruins on Sept. 3 in College Station. A deal between Mazzone and the Aggies had been close to done since Wednesday, but Mora insisted on Thursday evening that the 58-year-old was still a part of his coaching staff. 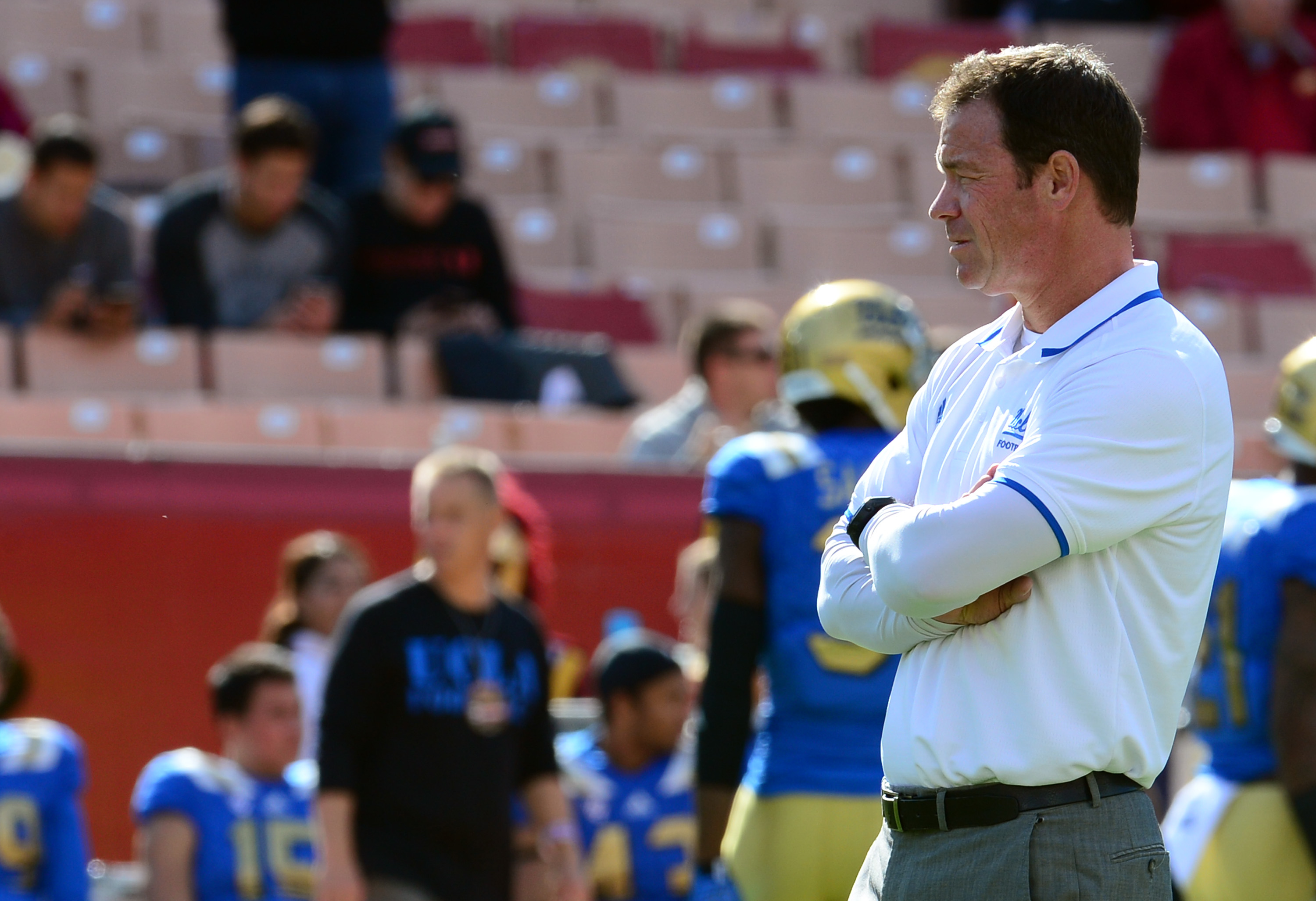 UCLA head coach Jim Mora suggested that talk of him returning to the NFL could be generated by his competitors. (Keith Birmingham/Staff)

Jim Mora reaffirmed his dedication to UCLA on Thursday afternoon, dismissing any talk of him returning to the NFL as “rumors and innuendo.”

“I’ve never really wavered,” he said on AM 570. “It’s interesting that people question that still.”

Appearing on the Petros and Money Show, Mora said that he has demonstrated “beyond reproach” his commitment to the Bruins. After finishing his fourth season in Los Angeles with an 8-5 record and a loss to Nebraska in the Foster Farms Bowl, the 54-year-old had been connected to the Miami Dolphins’ coaching search. On Sunday, NFL Network’s Mike Silver reported that both Mora and Texas A&M’s Kevin Sumlin are “trying hard” to get back to the pros.

Mora suggested that such talk may be generated by his competition to gain an edge in recruiting.

“I think it’s flattering not only to me, but to our program, that rumors are out there,” he said. “But at the same time, they’re just rumors.”

“There is no confirmed validity to the rumor that Noel is leaving,” Mora said. “He may, but he may not. I would hope that by the end of the day, we’ll know one way or the other.”

UPDATE: Mazzone has finalized his three-year deal with Texas A&M, per ESPN. 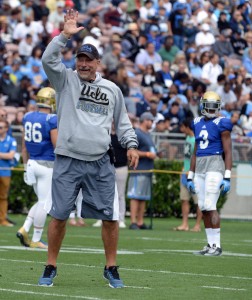 UCLA offensive coordinator Noel Mazzone is on his way out after four years. (Keith Birmingham/Staff)

UCLA offensive coordinator Noel Mazzone will soon be coaching at Texas A&M, the team that hosts the Bruins to open the 2016 season.

The news was first reported on Wednesday night by FootballScoop. Mazzone’s move reunites him with Aggies head coach Kevin Sumlin, with whom he worked in the mid-1990s; both were on the same staff at Minnesota, coaching quarterbacks and receivers, respectively.

Mazzone has been a part of Jim Mora’s staff for four years at UCLA, and was the team’s highest-paid assistant at just over $654,000 in annual base pay. His most recent contract extension — a two-year deal signed in 2014 — also gave him a $130,500 retention bonus this past year, and another $165,250 on Jan. 1. ESPN reports that Texas A&M offered him a three-year deal worth more than $1 million annually.

The 58-year-old was hospitalized in mid-December, but returned to the team and called plays in the Bruins’ 37-29 loss to Nebraska in the Foster Farms Bowl the day after Christmas.

Texas A&M will be the 10th college football team that Mazzone has worked for as a full-time assistant.

His son, UCLA quarterbacks coach Taylor Mazzone, is expected to head to College Station and work in the same capacity.

UCLA offensive coordinator Noel Mazzone is still questionable to coach in the Foster Farms Bowl on Saturday, but his health seems to have improved since his hospitalization last week.

Mazzone is currently in San Francisco with the rest of the team and has been present at the Bruins’ practices.

“He’s not feeling great, but you know Noel — he coaches ball,” head coach Jim Mora said Tuesday. “He loves that game environment. I don’t know. I believe he’ll be at the game. I’m not quite sure what his role will be yet.

“The important thing here — that’s a serious medical condition that he has — is we make sure that he’s safe.”

The 58-year-old Mazzone had been hospitalized with a blood clot in his lung, according to Bruin Report Online, but reappeared at UCLA’s practice last Thursday. Mora declined to go into the specifics of UCLA’s contingency plan if Mazzone cannot coach, but expressed confidence that the Bruins will be prepared to face Nebraska even if his assistant has to remain at the hotel.

“I think that’s one of the benefits of having a staff that’s been together, that’s had continuity,” Mora said. “It allows you to be able to adjust quickly when things like this happen.”