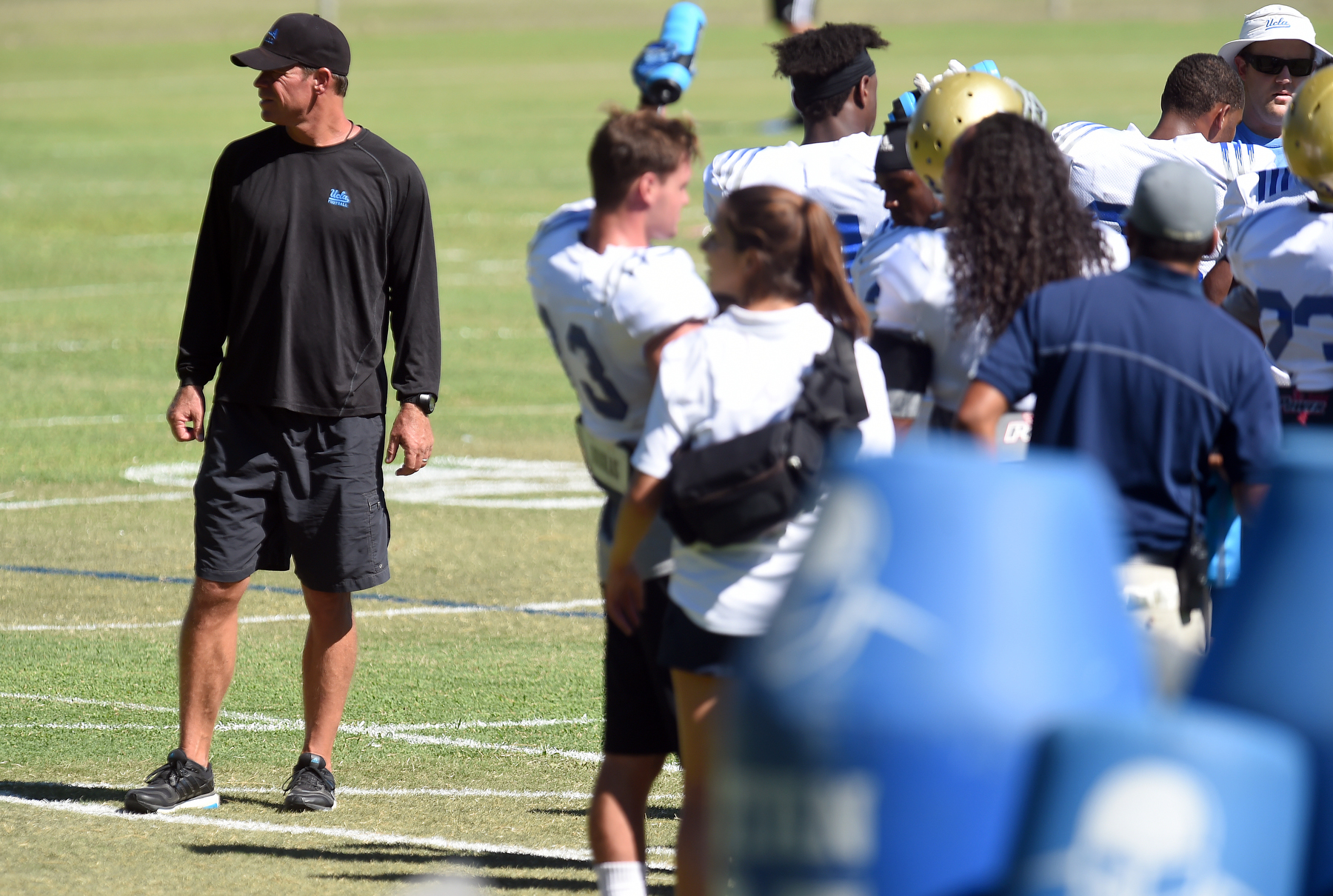 Jim Mora, left, has made what UCLA calls the largest donation by a sitting head coach in school history. (Jennifer Cappuccio Maher/Staff)

Jim Mora and his family have made a personal donation to UCLA’s new football facility, which is good news for the Bruins in the way that additional money usually is.

But that this is a head coach putting in his own money — rather than a major booster — is a tremendous PR boost for the Bruins, who have endured offseason after offseason of speculation that their head coach could bolt for the NFL.

Mora and his wife Shannon made what the school called on Thursday “the largest donation by a sitting head coach in UCLA history.” Even if it doesn’t come close to matching some of the other figures poured into the project, it’s an easier sell for those unconvinced of the 53-year-old’s future in Los Angeles. END_OF_DOCUMENT_TOKEN_TO_BE_REPLACED

The eighth annual Jim Mora Celebrity Golf Classic takes place on Monday at the Riviera Country Club. The event is the main fundraiser for the Count on Me Family Foundation run by Mora and his wife, Shannon, which benefits children who are in need and at risk.

This year’s golf event will include actors Joel McHale and Kevin Nealon, as well as several former NFL players such as Jonathan Ogden and Rod Woodson.

The foundation takes donations via PayPal, and also has an Amazon Associates program that donates up to 8.5% of your Amazon.com purchases.

Jim Mora and his wife, Shannon announced Saturday the Southern California launch of their Count on Me Family Foundation, which helps children who are either mentally/physically challenged, at risk, or from low socioeconomic backgrounds. For more information, click through to the official website.

Shannon said the Celebrity Golf Classic, the foundation’s main fundraiser, was already sold out. It will be held at the Riviera Country Club on May 20, featuring names such as Terry Bradshaw, Warren Sapp and Joel McHale.

Dozens of kids were also out at Saturday’s UCLA football practice as part of the launch, which was adorable to see. A little girl even got Anthony Barr to autograph a picture of him ending Matt Barkley’s USC career.