» UCLA head coach Jim Mora talked after UCLA’s final spring practice on Saturday at the Rose Bowl, and immediately quashed the biggest question of the Bruins’ offseason: Who will be the new starting quarterback?

“I don’t think we’re any closer to a decision than we were when we started spring,” he said, with more or less a straight face. And he isn’t planning to name one until the season-opening kickoff against Virginia on Sept. 5.

Regardless of what happened through four weeks of spring practice, the coaching staff has consistently insisted that no hierarchy has emerged among the four candidates vying to be Brett Hundley’s successor. On Saturday at the Rose Bowl, all four got 11-on-11 reps. Jerry Neuheisel and Josh Rosen ran with the first-string, while Asiantii Woulard and Mike Fafaul got their chances with the second string.

Rosen subbed in for 11-on-11s more than an hour into practice, and completed his first five passes. His sixth was a nice-looking 35-yard pass to Logan Sweet, but cornerback Marcus Rios reached over and tipped it away at the last second. He eventually finished 13 of 17 with two touchdowns and an interception on the day, with the pick going to Johnny Johnson.

As has been the case at times this spring, Rosen didn’t look as sharp during seven-on-sevens. He missed a couple of back-to-back swing passes to Paul Perkins, one thrown slightly too far ahead and the other thrown too low.

» Instead of running a real, live scrimmage like it did last spring at the StubHub Center, UCLA opted for what was essentially a regular practice. When Mora announced that decision to the team on Monday, not everyone was excited. END_OF_DOCUMENT_TOKEN_TO_BE_REPLACED 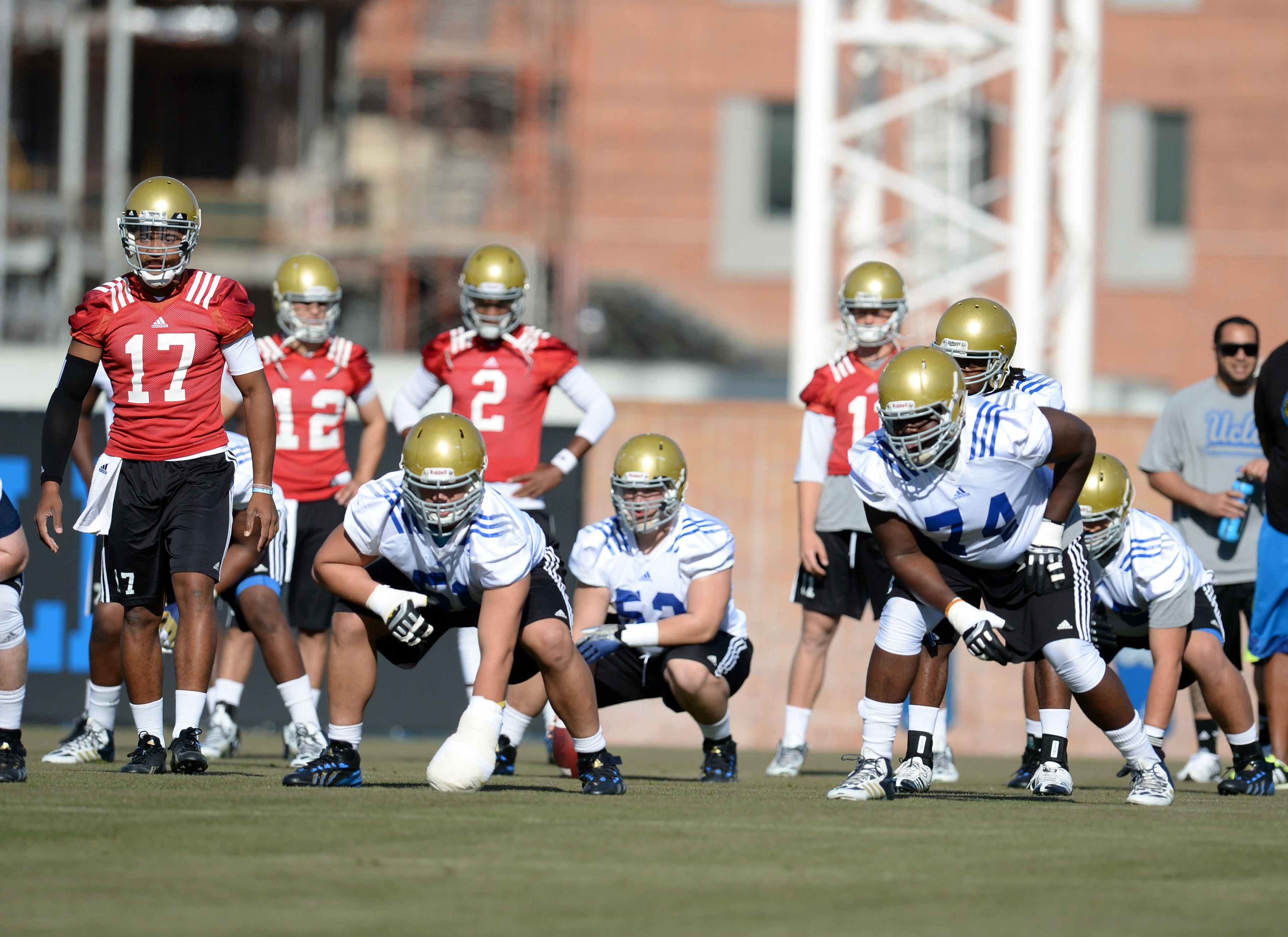 Brett Hundley leads UCLA in a spring practice on April 3, 2014. With the quarterback now off the the NFL, the Bruins will spend this spring trying to find his successor. (Hans Gutknecht/Staff)

The search for UCLA’s new starting quarterback will begin in a little over a month.

The Bruins announced their spring practice schedule today, with 14 practices that will start on March 31. The main event, of course, will be the competition to replace three-year starter Brett Hundley behind center. Five-star recruit Josh Rosen is the presumptive favorite after enrolling in January, but backup Jerry Neuheisel and redshirt sophomore Asiantii Woulard will make their bids as well.

Every session will begin in the morning, except for three Monday practices that start at 4:30 p.m. (April 6, 13 and 20). Since seats at Spaulding Field were removed last year, the observation areas will be standing-room only.

The spring game will be held at the Rose Bowl on Saturday, April 25 at 10 a.m.

For those trying to mark their calendars, UCLA’s Spring Game has been set for Saturday, April 25. The time and location have not been announced, and the rest of the Bruins’ spring camp schedule is also not yet released.

Quarterback Josh Rosen will obviously be the main attraction, and is set to compete for the starting spot after enrolling in January along with JUCO transfer offensive tackle Zach Bateman. Of the 2015 recruits that just signed their letters of intent this week, linebacker Joshua Woods and defensive backs Nathan Meadors and Will Lockett are expected to enroll early.

Defensive end Owamagbe Odighiuzwa shined in UCLA’s spring game, looking nothing like a player who missed an entire season due to multiple hip surgeries. Heading into his senior season, the former five-star recruit talked about his progress.

Photos from UCLA’s spring game at the StubHub Center in Carson on April 26. (Photos by Stephen Carr)