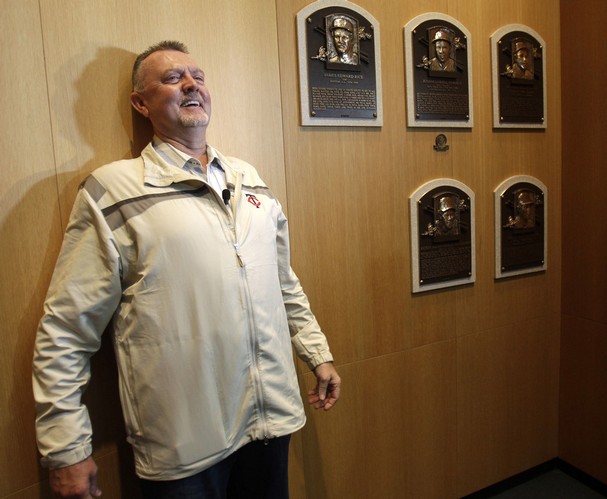 END_OF_DOCUMENT_TOKEN_TO_BE_REPLACED

There are two former Angels making their first appearance on the Hall of Fame ballot this year, Steve Finley and Aaron Sele.

Finley played one forgettable season in Anaheim, batting .222/.271/.374 in 2005. The 40-year-old was the weak link in an outfield that included Garret Anderson and Vladimir Guerrero in their primes, and occasionally Chone Figgins. He was pushed for time at DH by Jeff DaVanon. Each of Finley’s 440 plate appearances that season served as a reminder that the World Series run of 2003 was firmly in the past.

But don’t let Finley’s Hall of Fame credentials be obscured by one bad season. By several metrics, he’s on par with Jack Morris — who, in some voters’ opinions, is the only worthy Hall of Famer on this year’s ballot (see below). My biggest gripe with those metrics is that they don’t consider playoff performances, which is the primary reason Morris got two-thirds of the BBWAA electorate to vote for him last year. Performing in the clutch counts for something, and I doubt Finley’s contribution to the Arizona Diamondbacks’ 2001 World Series championship is enough to keep him on the ballot beyond this year.

And then there’s Lee Smith, who recorded 37 of his 478 career saves in a California Angels uniform. If he isn’t a Hall of Famer, the same writers who leave Smith off their ballots need to re-evaluate how they view the save statistic. That’s not an endorsement or an indictment on either Smith or the save – just an observation.

There was plenty of Hall of Fame debate today with the final voting coming tomorrow. As I often say, there’s nothing like parsing through the moral crises of a bunch of cranky sports writers to start your morning off right …
END_OF_DOCUMENT_TOKEN_TO_BE_REPLACED

Is Lance Berkman an upgrade for the Rangers over Josh Hamilton?

That was the question pondered today at FanGraphs.com – more specifically, who will have the better 2013 season? The stat-laden conclusion is that on offense, the two will be about even:

So, what does the extra $114 million get the Angels with Hamilton that the Rangers are punting with Berkman? Defense, basically. Berkman is likely to be a DH who might occasionally play first base during interleague match-ups, while Hamilton is likely to be an above average defender in right field. There’s no question that makes Hamilton the better player, and certainly worth more in salary. I’m not suggesting that Berkman and Hamilton are equally valuable, or that Hamilton and Berkman should have signed the same contracts this winter. However, I am suggesting that perhaps the overall net effect of the moves on the Rangers and Angels won’t be as big as they might appear on the surface.

Some more reading material to delay the start of your work week: