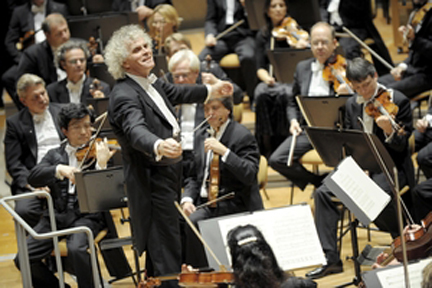 Somewhat overshadowed by the Los Angeles Philharmonic’s opening this week (LINK) are a handful of other openings that should be noted.

The orchestra’s board announced today that it has extended Kelly Ruggirello’s contract as the LBSO executive director through the 2017. Ruggirello took over the post 18 months ago and this announcement means, presumably, that she will be leading the orchestra through its music director transition. Enrique Arturo Diemecke resigned abruptly last season after 13 years as the LBSO’s music director.

• The London Philharmonic Orchestra will make a stop at California State Northridge’s Valley Performing Arts Center on Oct. 10 at 8 p.m. Principal Conductor Vladimir Jurowski will lead the program of Dvorak’s The Noonday Witch, Tchaikovsky’s Symphony No. 6 (“Pathetique”) and Prokofiev’s Piano Concerto No. 3, with Jean-Efflam Bavouzet as soloist. Incidentally, the LPO announced yesterday that Jurowski’s contract has been extended through at least 2018 (LINK).

The following day, the LPO moves down the 405 Freeway to the Renée and Henry Segerstrom Concert Hall in Costa Mesa when it opens the Philharmonic Society of Orange County’s 2014-2015 season on Oct. 11 at 8 p.m. with the same program and performers as at VPAC. Information: www.philharmonicsociety.org

If you’re so inclined, you can comparison performances of the concerto because Behzod Abduraimov will be the soloist when the Los Angeles Philharmonic pairs Prokofiev’s third concerto with Dvorak’s Symphony No. 7 in a “Casual Friday” concert on Oct. 17. Basque conductor Juanjo Mena will conduct. The concerts on Oct. 18 and 19 add Prokofiev’s “Classical” Symphony to the aforementioned two. Information: www.laphil.com
_______________________