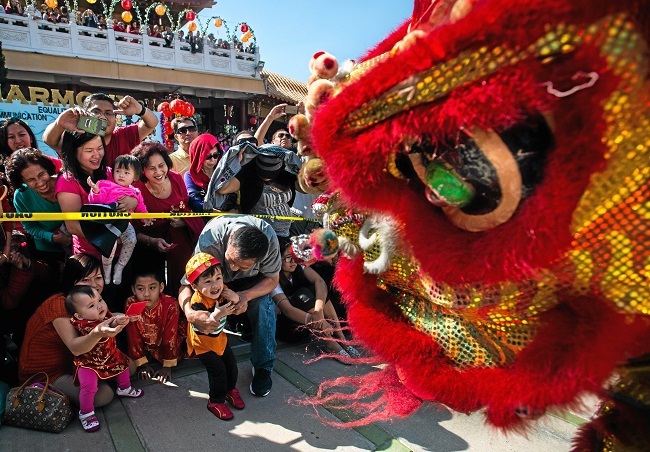 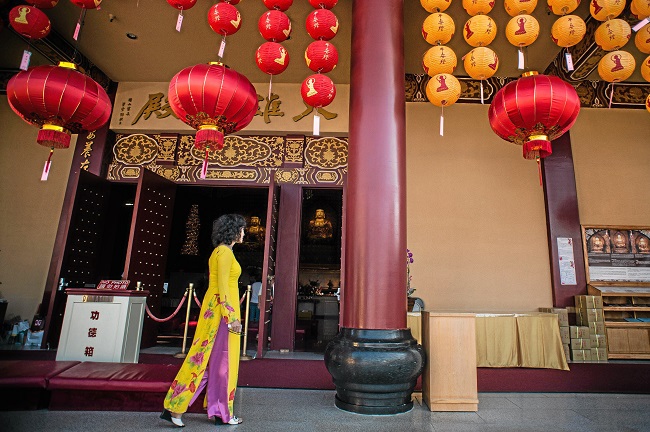 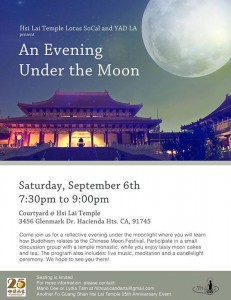 As part of its 25th anniversary, the Hsi Lai Buddhist Temple will celebrate with a free music and art festival this Saturday in Hacienda Heights.

“Buddhism is the way to understand the heart,” explains the Temple’s abbot, Venerable Hui Dong. “Music and art are also means that touch the heart. By putting them together, the festival is in fact a journey to the deepest of one’s heart.”

Organizers have lined up more than a dozen bands and artists for the family event. It will be held from 4 to 8:30 p.m. in the temple courtyard at 3456 Glenmark Drive.

“We’ll have some great local bands perform this weekend,” said Mario Cee, one of the festival organizers. “It’s sort of East meets West, with indie and folk bands performing along with the Chinese drum troupe, as well as the temple’s zither and erhu bands.”

The Walnut photographer says Buddhism has had a dramatic effect on him.

“It’s totally changed my life. The meditation and teachings have taught me to live in the present and be mindful of how I treat others,” Cee said.

The Hsi Lai Temple docent has led tours of the Buddhist Temple for the past six years. He studies meditation in the Hacienda Heights shrine every Sunday.

“Meditation really helps my concentration and focus,” Cee noted. “We’re lucky to have such a beautiful Buddhist temple right here in Southern California.”

The traditional Chinese mountain monastery is built off Hacienda Boulevard in the Puente Hills. It is one of the largest temples in North America, and the American headquarters for one of Taiwan’s biggest Buddhist organizations, Fo Guang Shan.

The temple’s founder, Venerable Master Hsing Yun, built it to serve as a bridge between East and West. It teaches Buddha’s instructions on kindness and compassion, as well as joy.

The free family event, the first of its kind at the location, will take place Saturday, June 21, from 4 p.m. to 8:30 p.m. in the courtyard of the temple, located at 3456 Glenmark Drive in Hacienda Heights.

Also featured will be a showing and sale of works by a selection of artists and craftspeople — some working on site — along with vegetarian food booths, book sales, face painting and more. Public areas of the facility will be open during the event, which marks the temple’s 25th anniversary.

Local musicians and artists were publicly invited to submit their works for consideration for this event, whose theme is practicing compassion through music and art. More information is on the festival’s Facebook page, facebook.com/hltmusicandarts.

Among the bands will be The Zero Summers, who describe their music as “bossa garage anti-pop”; Ever In Bloom, a “new-age/old-school/ melodic-poetic” band centered on three close friends and songwriters; and Alnilam, whose music combines dreamy atmospheric sounds, vivid images and soaring harmonies. Also appearing will be Red On Strike, who will perform a semi-acoustic set of late ‘90s post-punk rock; indie retro folk-pop duo The Gypsy Lights; and The Lotus Band, whose soulful alternative music seeks to inspire listeners to contemplate a mindful, positive life.

Participating visual artists will include artist and Emmy-winning animator Donna Kay Lau, who has worked on Dora the Explorer, CatDog, Oswald the Octopus, Generator Rex and other series for Nickelodeon and Cartoon Network. She is also designer of two clothing lines, Art is On! and Surf Soup Surf Couture.
Also appearing  will be Hollywood concept artist Chris Ayres, author of the Daily Zoo books, which began as a sketchbook started as part of Ayres’ cancer healing process. Dr. Nancy Cowardin, creator of the Parade of the Buddhas and Silk Road Map triptychs for the international Buddha’s Birthday Education Project, will be showing and selling her art along with Yaya Tam. Helen Stiver will be displaying and selling her exquisitely handcrafted jewelry.
“Buddhism is the way to understand the heart,” says Venerable Hui Dong, Abbot of Fo Guang Shan Hsi Lai Temple. “Music and art are also means that touch heart. By putting them together, the festival is in fact a journey to the deepest of one’s heart.”