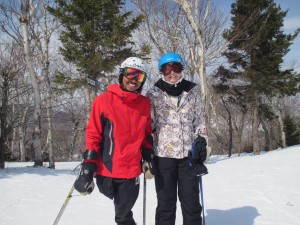 Premier extreme skier Dan Egan holds all-terrain ski camps at Killington Resort a couple times each season. Don’t know the name? He’s the star – along with his brother John – of a dozen Warren Miller films that turned extreme skiing into a lucrative industry.

He was just a boy then, ripping up everything he could find, 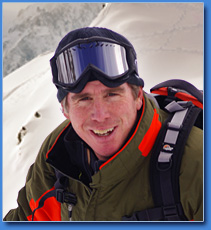 when Miller discovered him. These days, Egan produces his own sports films, covers world-wide skiing events (including the Sochi Olympics), and teaches ski clinics all over the world.

Today he’s at Killington explaining his teaching techniques before taking a group of skiers and riders to discover the joys of tree skiing at the Vermont resort.

His camps, he said, are about “total body skiing.”

“I can get you skiing better fast,” he explained. “I look at the alignment of your body over your feet and give you a set of drills and skills, and the only difference between beginning and advanced is the pitch we do (the drills and skills) on.”

At Killington, he said, skiers and riders can go boundary to boundary in the woods. But you need to know where those woods come out before heading in, he cautions.

In his tree skiing camp, Egan aspires to change the way his students see the hill. One skier, after a day of following Egan through the woods, said of the experience: “I was definitely out of my comfort zone, which is a good thing.”

Egan’s best tree skiing tips: “Better to kick them then kiss them.” And, “keep your feet below your head.” 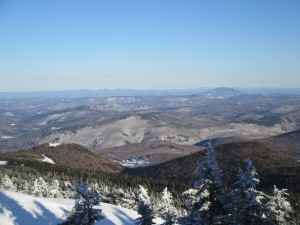 The anticipated late winter storm which was expected to drop several inches of snow today at Killington, Vermont, instead veered further east, with the edges only skirting the state. The resort received maybe an inch of snow in the early morning.

This, of course, is on top of two feet of snowfall in the last two weeks and a foot the two weeks before that. Snowmaking at Killington stopped more than a month ago, said Michael Joseph, communications manager for the resort.

Though the snow came late to Killington, it’s now “full on winter – wall to wall,” Joseph said, indicating all runs and lifts at the resort are open.

It seems skiers on the east coast are accustomed to skiing on man-made snow and are finding the real snow a treat. Dave, a 69-year-old self-described Vermont farm boy and lifelong skier, called conditions at Killington this year, “the best it gets.” At least on the east coast, anyway, he added.

With the storm bypassing Killington and the state of Vermont, it turned out to be a second glorious day of skiing, with some clouds and sun, temperatures in the 20s and – most importantly – beautiful packed powder.

Killington is quite large, covering four mountains with 212 trails spread across 1,977 acres. Today we journeyed to the resort’s highest peak – Killington Peak – at 4,241 feet. I know it doesn’t sound like much to us west coast skiers accustomed to 10,000- and 11,000-foot peaks, but here it’s spectacular. Standing at the edge of the mountain, you can see 360 degrees. Skiers can take in the panoramic view of the Green, White and Adirondack mountains. A friendly skier and Vermont native pointed out Mount Washington, New Hampshire, in the distance and the nearby ski resorts of Okemo, Stratton and Pico.

And you don’t have to be an expert skier to reach the top. All levels of ski terrain come off the peak. Now that’s a treat. 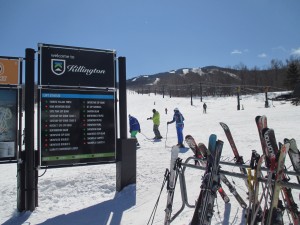 When I woke up this morning at Killington Grand Hotel in Vermont, outside it was 1 degree below zero. The unseasonably cold weather gripping the nation for most of this winter has not yet released its grip on the northeast. Another storm is headed this way on Tuesday with a chance of yet more snow.

Fortunately by the time I hit the slopes at Killington Resort in the afternoon,  it warmed up nicely and was beautiful and sunny if a bit windy at times.

And the ski conditions were not at all what I expected.

This is the first time I’ve skied anywhere in the East Coast, and I couldn’t have picked a better place. Killington was at its peak.

“Today is the best skiing of the season,” said Mike, a Killington mountain host stationed at the top of a chairlift where we stopped to get some advice on the best way to ski back to where we started earlier in the day.

“This is our fourth trip this year, and this is the best skiing we’ve had,” said Evelyn, a teacher from Massachusetts skiing Killington with her husband.

Sometimes we West Coast skiers can be a bit of a ski snob when it comes to East Coast skiing. “It’s always icy.” “It’s hard snow.” “All you do is chatter down the hill.” “They’re all small hills.” I’ve heard it all.

But Killington has surprised me. It’s none of the above – at least for today.

Sometimes we west coasters can be ski snobs. We have so many great SoCal and Western US ski resorts to choose from we don’t bother with what’s on the other side of the country. Well, we’ve put aside our bias and are trying – for the first time – skiing in Vermont. Join us in our adventure on the right coast as we explore historic Killington and Pico ski resorts.