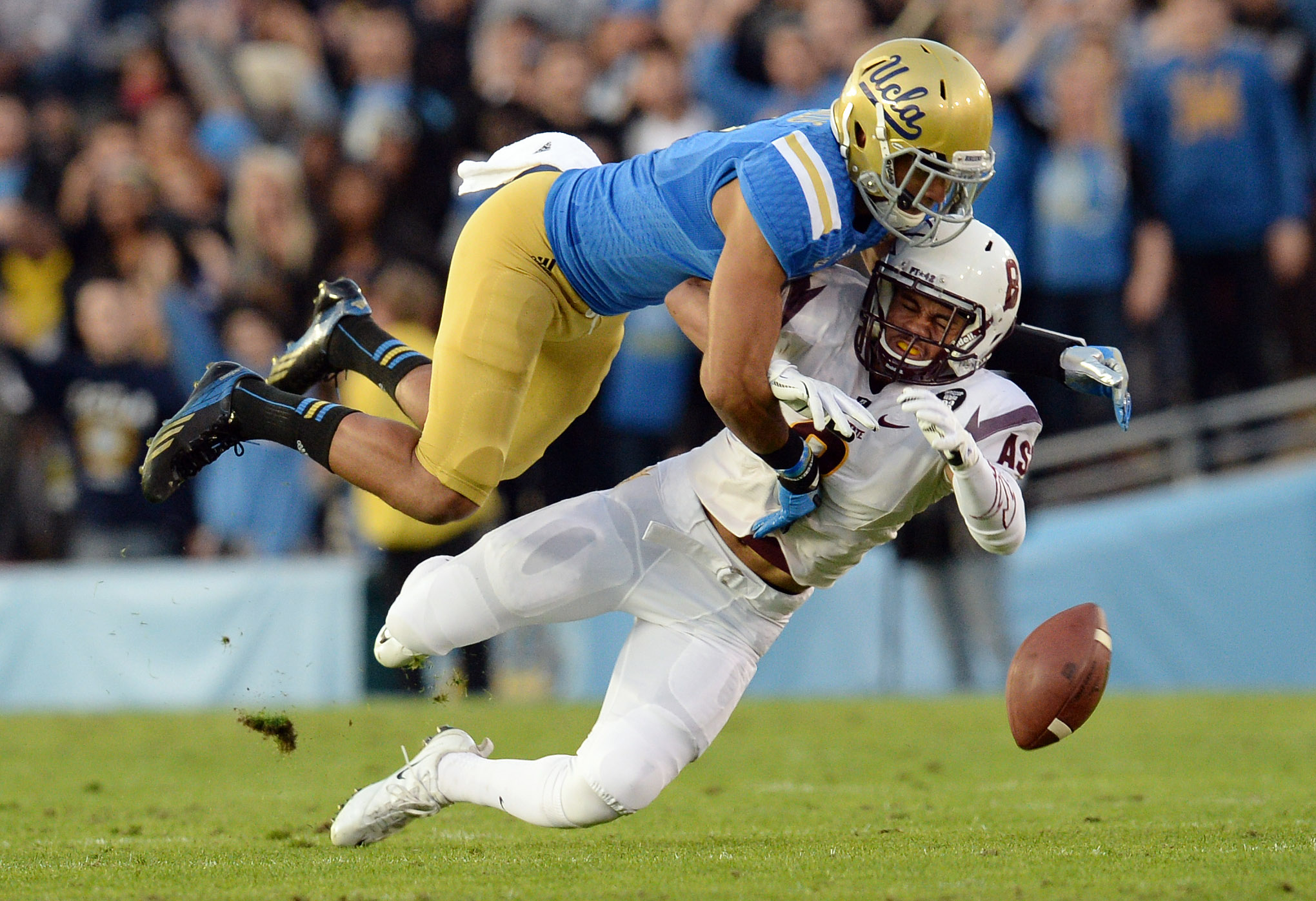 The best candidate is likely still senior Fabian Moreau, who looked fantastic in spring and fall camp last year before a very uneven 2014 season. The former running back was burned repeatedly through the first half of his junior campaign, but eventually found more a rhythm as the year wound to a close. Position coach Demetrice Martin said in April that Moreau often appeared to be in great position for a play, then explicably stopped running all the way through. The Florida native has since made an effort to work on his ball skills and fix that habit. END_OF_DOCUMENT_TOKEN_TO_BE_REPLACED

UCLA defensive back and returner Ishmael Adams injured his ankle in Saturday’s 38-20 win against USC, and remained limited during Monday’s practice.

However, head coach Jim Mora sounded optimistic about Adams’ chances to return against Stanford this Friday to help the Bruins clinch the Pac-12 South. The 5-foot-8 corner has returned two interceptions for touchdowns this season, as well as 100-yard kick return score. He also has 33 tackles and four pass breakups.

“He came out and he moved around,” Mora said. “I didn’t see much of a limp. END_OF_DOCUMENT_TOKEN_TO_BE_REPLACED

» A trio of true freshmen were left off UCLA’s training camp roster. Quarterback Aaron Sharp, linebacker Dwight Williams and receiver Jordan Lasley did not practice on Monday, and will not return to the team until Aug. 31, after UCLA’s season opener at Virginia.

“Those three guys did not live up to the standards that we’re looking for through the summer months,” head coach Mora said.

None of the three were expected to contribute immediately.

» Receiver Darren Andrews is officially out for the season after undergoing microfracture surgery on his knee. He will redshirt the upcoming season after initially tearing knee ligaments late last November, ending a season in which he caught four passes for 52 yards.

Cornerback Johnny Johnson is also out for the season after injuring his shoulder for the second year in a row. He had already redshirted the 2013 campaign.

» Promising inside receiver Mossi Johnson injured his left shoulder on Monday, and left the field with a UCLA staffer helping him hold his arm still. Mora said he hoped it was just a mild AC sprain.

Johnson played well in spring camp, and was likely the first receiver off the bench for either Devin Fuller or Thomas Duarte.

» Priest Willis — whom Mora once lauded as a “picture-perfect, beautiful corner” — struggled as a freshman transitioning over from safety. END_OF_DOCUMENT_TOKEN_TO_BE_REPLACED

Heading into the 2014 season, the best bet on the roster is Fabian Moreau — a former three-star running back who converted to cornerback as soon as he arrived in Los Angeles two years ago. The 6-foot-2, 200-pound soon-to-be junior earned an all-conference honorable mention in just his second year at the position — one in which he started 12 games. END_OF_DOCUMENT_TOKEN_TO_BE_REPLACED