How did the 2017 Major League Baseball draft effect the 2018 UCLA baseball team? It’s certainly more complicated than adding up the number of players who were drafted.

Of the six UCLA players drafted over the last three days, three are guaranteed to leave and the other three are faced with decisions, some easier than others.

Of the six players from UCLA’s incoming recruiting class who were drafted, three were selected in the first six rounds, meaning they would be passing up some hefty signing bonuses were they to attend UCLA. A third was drafted in the 14th round, a fairly unpredictable range of the draft when it comes to signability. The final two were taken in the last two rounds of the draft, making it likely that at least they will attend UCLA.

Three of the current UCLA players drafted have already exhausted their college eligibility. Pitchers Scott Burke (Orioles, 20th round) and Moises Ceja (Rockies, 32nd round) and outfielder Brett Stephens (Rockies, 28th round) have no decisions to make.

Junior pitcher Griffin Canning, the Bruins’ No. 1 starter last season, was the Angels’ second-round pick, No. 47 overall. Were he to return to UCLA, he would be leaving behind an estimated signing bonus of $1.4 million. It’s fairly safe to say he’s not coming back. END_OF_DOCUMENT_TOKEN_TO_BE_REPLACED

Kyle Molnar had it going tonight, racking up a career-high 11 Ks. #GoBruinshttps://t.co/AgoTyW2my2

UCLA’s Kyle Molnar was named the Pac-12 Pitcher of the Week today, his prize for accomplishing something no Bruin had in over a decade.

The freshman righty struck out eight batters in a row in an 11-2 win over Washington State on Sunday, giving the team its fifth straight win and a series sweep to open conference play. The last UCLA pitcher to record that many consecutive strikeouts was David Huff, who fanned nine straight on Feb. 16, 2006 at Pacific.

Molnar’s streak looks even more impressive given the Bruins’ track record of producing top pitchers. Since Huff was taken 39th overall in the 2006 MLB draft, seven UCLA pitchers have become either first-, second- or third-round picks.

That run includes Gerrit Cole and Trevor Bauer — who went first and third overall in 2011 — as well as James Kaprielian, who went 16th to the New York Yankees last June. Cole struck out seven straight against Texas A&M in March 2010.

Molnar, who opened the season as UCLA’s Sunday starter, was ranked as Baseball America’s No. 53 draft prospect. The Aliso Niguel alum was intent on going to college despite one West Coast scout describing him as the most pro-ready high school pitcher available last year.

The 6-foot-4 freshman has a 4.50 ERA through five starts, but that number drops to 3.43 after excluding his career debut against North Carolina.

The 12th-year head coach earned that victory in dramatic fashion on Sunday night, as the No. 14 Bruins (6-5) pushed past USC, 5-3, in a 14-inning thriller. Senior outfielder Christoph Bono batted in UCLA’s go-ahead runs with a bases-loaded chopper in the top of the final frame at Dodger Stadium.

Savage now has a 27-14 record against the Trojans, more wins than he has against any other opponent. The two teams will meet again on May 13 to start a three-game series at Jackie Robinson Stadium.

The 51-year-old now is the fourth active Pac-12 coach to hit the 400-win threshold, joining Stanford’s Mark Marquess, Oregon State’s Pat Casey, and Cal’s David Esquer — and is the only one except Marquess to do it in fewer than 12 full seasons.

He remains the Bruins’ third-winningest coach behind Gary Adams (985) and Art Reichle (747), but holds a higher winning percentage (.592) and brought back the program’s only national title in 2013. Savage is under contract through 2025. 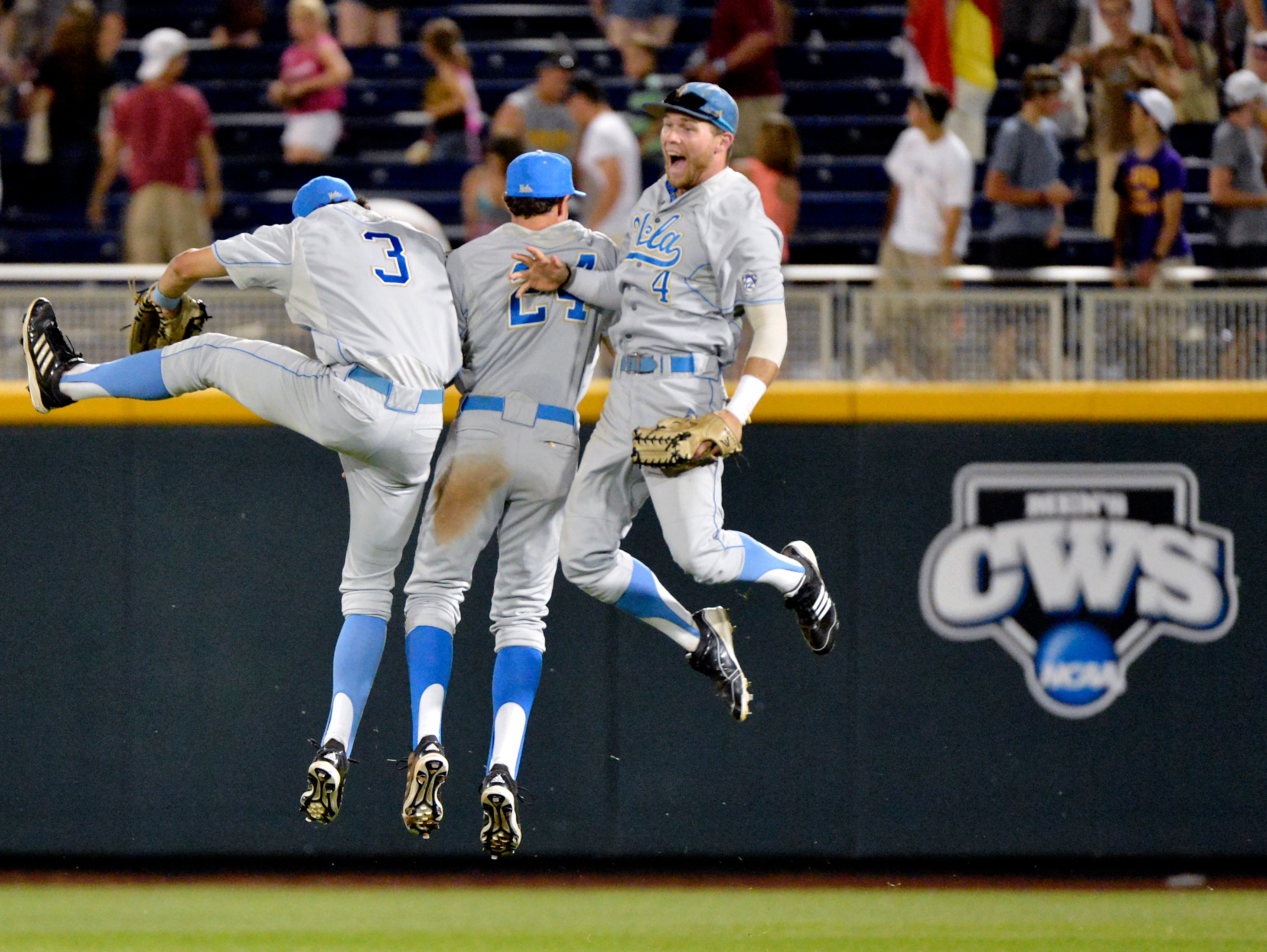 Outfielder Eric Filia (4) was a crucial part of UCLA’s national title run in 2013, but missed the last two seasons due to injury and an academic suspension. As a senior, he is expected to be the Bruins’ biggest bat. (Ted Kirk/Associated Press)

The UCLA baseball team clinched the No. 1 overall seed in last year’s NCAA Tournament, but sputtered out against Maryland in the regional round. Heading into John Savage’s 12th season, are the Bruins ready to make a deeper run despite the departures of several stars?

UCLA baseball has hired Bryant Ward away from Loyola Marymount, filling in a spot on its staff that opened a month ago.

Ward will serve as the Bruins’ assistant coach and recruiting coordinator, overseeing the infield and hitting instruction the same way T.J. Bruce did for the past five years. Bruce, a tenacious recruiter, took Nevada’s head coaching job in late June.

Ward appears to be cast out of a similar mold. At LMU, he helped pull in a top-25 recruiting class in 2011, the school’s first in 15 years — and replicated the feat two years later. The East Carolina alum also coached previously at the University of South Florida and Cal State Fullerton.

His two-year tenure with the Titans (2005-06) put him on the same staff as former UCLA assistant Rick Vanderhook, who just completed his fourth season as CSUF head coach.

“We are very excited about Bryant joining the program,” UCLA head coach John Savage said in a statement. “He is a dedicated coach who excels at teaching infielders and is an outstanding recruiter. He will bring tremendous passion and energy to the program.”