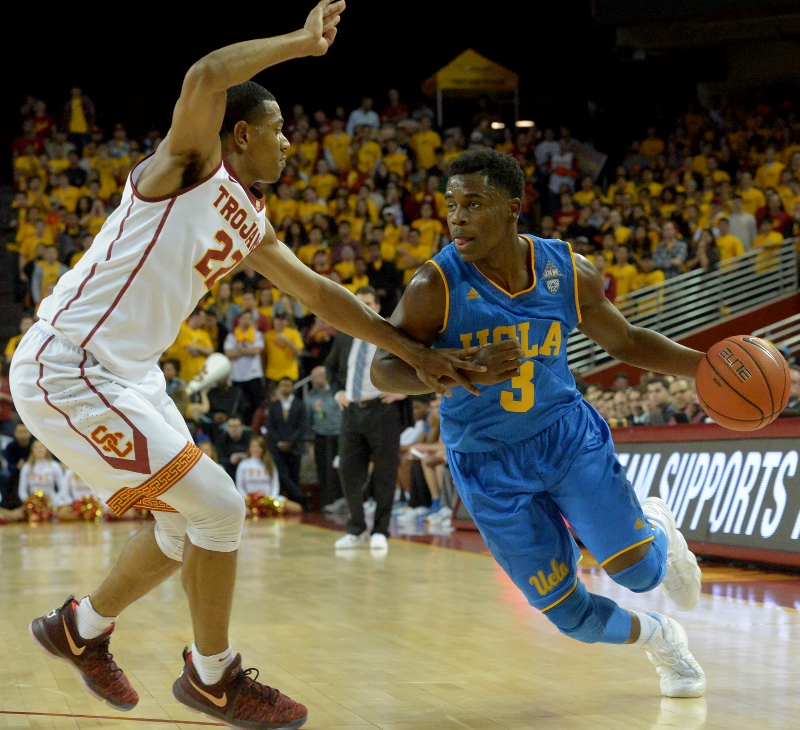 The UCLA basketball team will play at USC on the final day of the 2017-18 regular season, a game that could have large implications. (Thomas Cordova SCNG)

Logistically, the Bruins can be thrilled with the stroke of luck that landed Arizona on their schedule just once in the regular season. The Wildcats could be a preseason No. 1 team in the country and avoiding a second meeting could be the difference in winning a conference championship. For example, Arizona and Oregon played each other just once last season, while UCLA had to play each twice, a fate that probably cost it a share of the conference title.

The timing of UCLA’s matchups with USC, which could form the top tier in the Pac-12 along with Arizona and UCLA, isn’t particularly favorable for the Bruins.

UCLA plays at USC in the final game of the regular season, where a more talented Bruins team than the 2017-18 version wilted in its worst performance of last season. UCLA’s first matchup with USC will be the final game of the first round of Pac-12 play and precedes the week it plays at Arizona and against Oregon in Pauley Pavilion, its toughest stretch of conference play.

UCLA can take some solace in its young team being able to ease into conference play by hosting the Washington schools to open Pac-12 play and visiting Cal and Stanford the next week. Last season, by comparison, UCLA opened with a last-second loss at eventual conference co-champion Oregon and its second road trip was the Colorado-Utah combination that only two programs have emerged from unscathed in Pac-12 history.

A sprained foot shelved Anigbogu for the only other game he missed the remainder of the season, a March 17 first-round NCAA tournament contest. In other words, he played four months of college basketball without knee issues only for concern to crop up shortly before the NBA draft. END_OF_DOCUMENT_TOKEN_TO_BE_REPLACED

Welcome to the #LakeShow @ZO2_!! pic.twitter.com/pSIlNl0EWu

It no longer has to be spoken into existence. Lonzo Ball has been drafted by the Los Angeles Lakers.

Anticipation that has been building since Ball’s banner season at UCLA – and spiked when NBA draft lottery netted the Lakers the No. 2 pick – finally delivered.

After the Philadelphia 76ers selected Washington’s Markelle Fultz with the No. 1 pick, the Lakers landed their point guard of the future.

“It’s a dream come true,” Ball told ESPN. “It’s crazy. I couldn’t ask for anything more and to be able to learn from (Magic Johnson) every day is truly a blessing.”

Ball, UCLA’s highest selection in the NBA draft since David Greenwood was the No. 2 pick in 1979, changed out of his black dress shoes into purple and gold Big Baller Brand shoes a few minutes before he was selected. END_OF_DOCUMENT_TOKEN_TO_BE_REPLACED

Bryce Alford was the most athletically disadvantaged of UCLA’s eight rotation players last season. He was the weakest on defense. He had the most trouble driving to the basket – he shot 46 percent at the rim, 18 percent less than the closest UCLA player.

But the 6-foot-3, 185-pound guard may find his way onto an NBA roster because his strength is the fastest-rising commodity in the league. Alford shot 43 percent from 3-point range his last season at UCLA. And as far as volume is concerned, he set the school’s single-season and career record for 3-pointers, surpassing the marks of nine-year NBA veteran Jason Kapono.

Alford has been invited to his share of workouts approaching Thursday’s NBA draft, including by both the Lakers and Clippers, and the Pacers from his native Indiana.

“My dream has been the NBA my whole life,” Alford said following his workout with the Pacers. “I’ve never been interested in going over seas. That would be a plan C, plan D kind of thing. If I had to spend a year in the D League that would be fine. Or if I had to spend a year overseas to get a shot that way, whatever it takes for me to get to the NBA, that’s what I’m going to do.” END_OF_DOCUMENT_TOKEN_TO_BE_REPLACED