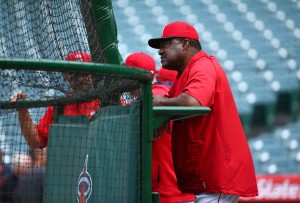 Angels hitting coach Don Baylor, who won the 1979 American League MVP with the Angels in 1979, will not return to the team in 2016. (Photo by Victor Decolongon/Getty Images)

“Don’s career with the Angels is one that has embodied commitment, dedication and leadership,” Eppler said in a statement. “From his MVP season in 1979, subsequent induction into the Angels Hall of Fame, and eventual return as hitting coach, Don will always remain synonymous with Angels Baseball.” 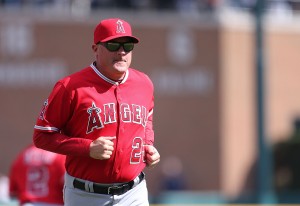 The Angels pitching coach Mike Butcher has been with the club since 2006. (Photo by Leon Halip/Getty Images)

“These are good baseball men and individuals who have a deep passion and focus towards their craft,” Eppler added. “I am both respectful and appreciative of the many contributions Don and Mike have made to this organization during their careers here.”

Baylor, who won American League MVP while playing for the Angels in 1979, returned to the club as hitting coach in 2014. He has been a manager or coach in each of the 23 seasons since he stopped playing.

Butcher took over the Angels pitching coach duties in 2006 after Bud Black left to manage the San Diego Padres.

“This past weekend I had a lengthy conversation with John Carpino and Billy Eppler regarding my status with the organization” Butcher said. “We mutually agreed this might be a good time for change. Billy is an impressive individual with solid concepts for the future and I wish him well. I am also thankful to Arte, the entire Angels family, and of course the players themselves for my time with an organization that has meant so much to my family and I.”

Gray pitched for the A’s on Sunday and is not eligible to play in Tuesday’s All-Star Game.

Santiago threw 106 pitches in seven innings against Seattle on Friday, and allowed eight hits. He struck out seven and allowed just one run and is now 6-4 with an ERA of 2.33, third-lowest in the AL among starters.

Santiago joins teammates Mike Trout and Albert Pujols on the American League squad. Trout and Pujols will start the game in Cincinnati.

TEMPE, Ariz. >> Angels pitcher Matt Shoemaker was feeling calm as he warmed up for Sunday’s game against the Kansas City Royals on a warm afternoon in the desert.

Then a bee buzzed around his head.

The swarm migrated like a tornado from left-center field at Tempe Diablo Stadium to the protective netting behind home plate. It finally settled on the “shotgun microphone,” perched high up in the net, used to pick up the crack of a bat for radio and television broadcasts. After 10 minutes Shoemaker warmed up again and the umpires allowed the game to begin.

The bees had the best seat in the house.

(Top) Mike Trout taking a cut at the plate

(Bottom) Albert Pujols getting into position at first base 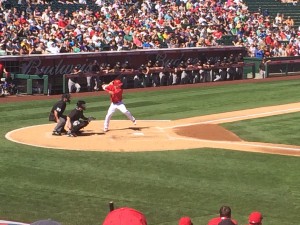 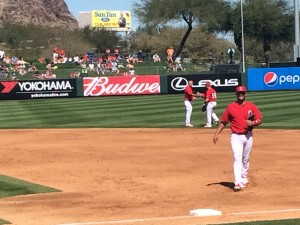