Joe Blanton has a 0.00 earned-run average out of the Angels’ bullpen this season. (Associated Press photo)

The Angels tried Joe Blanton as a starting pitcher when the season began. Can’t blame them — 228 of his 237 career appearances before this season came as a starter. He was even slotted third in the rotation.

That experiment ended after 20 starts. Blanton went 2-13, which remains the most losses in the American League. He allowed 24 home runs in those starts and opponents hit a collective .317/.356/.543 against him.

A funny thing happened when Blanton was bumped from the rotation last month: He started pitching really well. In six relief innings since, the right-hander has retired 18 of the 19 batters he faced. Unlike some relievers, Blanton wasn’t fazed by going seven days between appearances, pitching three perfect innings Monday night against the Texas Rangers.

Considering Blanton didn’t pitch a 1-2-3 inning in 2013 until May 2 — his sixth start of the season — that was no small feat. Blanton looks like he’s found his niche.

When he learned that Downs had been traded Monday, Maronde said, “I texted him and thanked him for all he’s done for me. I want to keep in touch. He’s a wealth of knowledge.”
END_OF_DOCUMENT_TOKEN_TO_BE_REPLACED

Angels manager Mike Scioscia was asked Friday what situations he’s comfortable using Joe Blanton in, now that Blanton has been demoted to the Angels’ bullpen.

“He still works in between. He’s working hard,” Scioscia said. “He’s probably going to be coming in a little earlier in the game, or having to pitch extra innings. Carry a game that goes into the 10th inning at times. There’s going to be — we’ll see what situations come up and how he’s used, but he’s definitely one of the few guys who can give us length if we need to.”

Blanton appeared in back-to-back games last Saturday and Sunday in Oakland, but hasn’t appeared in a game since. 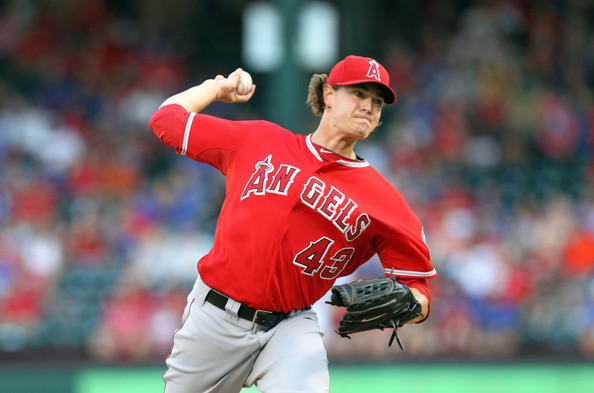 Garrett Richards will make his fifth start of the season Saturday against the Oakland A’s. (Getty Images)

Garrett Richards will start Saturday for the Angels against the Oakland A’s. Richards will take the place of right-hander Joe Blanton (2-13), who leads the major leagues in losses.

Blanton was 0-3 with an 8.84 earned-run average in his last four starts. Manager Mike Scioscia praised Blanton’s effort Tuesday but acknowledged the reality of the situation.

“He obviously doesn’t have everything together like he needs to,” Scioscia said. “He’s working hard with [pitching coach] Mike [Butcher] to find the consistency that he needs to repeat pitches, and it’s been a struggle for Joe.”

Richards has started four games this season, all in April, and relieved another 30. As a starter the 25-year-old from Riverside is 1-2 with a 5.54 earned-run average despite limiting opponents to a .229 batting average, .282 on-base percentage and .365 slugging percentage.

Richards started nine games for the Angels last year (3-2, 4.42 ERA) before being demoted to the bullpen in August.

It remains to be seen how or if Blanton would fit into the team’s pitching staff with Richards in the rotation.

The Angels enter the four-game weekend series in a critical position. They began Wednesday 11 games behind the A’s for first place in the American League West, before beating the Minnesota Twins 1-0 to salvage the final game of their three-game series.

The Angels have 63 regular-season games remaining and 10 are against the A’s.