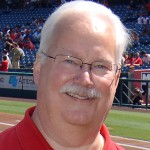 Dr. Lewis Yocum, the Angels team physician who died Saturday, worked at the Kerlan-Jobe Clinic for more than 30 years. Yocum didn’t invent Tommy John surgery – Frank Jobe did – but he made it faster.

“Some of the little refinements that we do, he helped develop them,” Jobe said. “For example, he’d drill the holes. At he time it took a while to get the holes just right took to get the lead sutures through those holes, he was able to find a way of doing that real slick, so that cut about 15 minutes off the operation time.”

And yet, when I asked Jobe to identify Yocum’s legacy, he went with something completely different. Click the link above to see what he said.

I talked to a lot of people about Dr. Yocum yesterday and the vast majority of what they said didn’t fit in my story for the newspaper. So here’s the rest, in bullet-point form for a Wednesday afternoon:
END_OF_DOCUMENT_TOKEN_TO_BE_REPLACED

Angels pitcher Sean Burnett had surgery to remove bone spurs in his left elbow last October and is still dealing with the aftereffects.

An examination Tuesday revealed inflammation in the back of the elbow, and the Angels placed Burnett on the disabled list for the second time this season. Even though the source of pain has been different, both of Burnett’s DL stints have been related to the surgically repaired elbow, which has cost him 22 games already.

“It just all relates to that surgery I had,” he said. “My elbow’s got more movement to do. It’s inflaming itself, just reacting to that space. It’s used to those bone spurs being there.”

END_OF_DOCUMENT_TOKEN_TO_BE_REPLACED

The left-hander, who’s been out since April 26 with stiffness in his right forearm, gave up a home run and induced three ground balls in his lone inning of work for the Inland Empire 66ers. More importantly, he didn’t feel any pain in the forearm.
END_OF_DOCUMENT_TOKEN_TO_BE_REPLACED

Angels left-hander Sean Burnett is scheduled to pitch an inning tomorrow for Single-A Inland Empire, his first rehabilitation assignment since going on the disabled list with tightness in his left forearm.

Jepsen has been sidelined since April 12 with a strained right shoulder.

Ryan Madson is taking a pause in his rehabilitation schedule. The right-hander threw an inning four days ago for Single-A Inland Empire and was supposed to go to to Triple-A Salt Lake on his next assignment. That might not happen now, though his next outing will be a rehab assignment somewhere.

“He was going really hard for a week,” Scioscia said. Madson is “just trying to catch his breath and recover.”