END_OF_DOCUMENT_TOKEN_TO_BE_REPLACED

According to the Associated Press, Van Slyke’s deal is worth $1,325,000 and Hatcher’s contract is worth $1.25 million.
END_OF_DOCUMENT_TOKEN_TO_BE_REPLACED 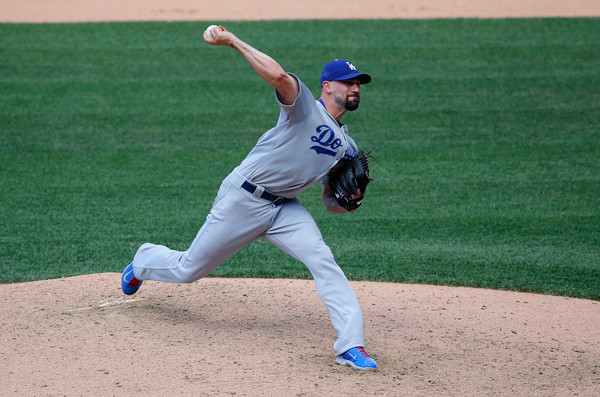 Dodgers pitcher Chris Hatcher is eligible for arbitration after the 2016 season. He might not pitch in the meantime. (Getty Images)

Chris Hatcher might not pitch again this season because of a Grade 3 strain of his left oblique muscle.

END_OF_DOCUMENT_TOKEN_TO_BE_REPLACED

The Dodgers’ disabled list grew by one Wednesday, when Chris Hatcher was placed on the 15-day DL with a left oblique strain. Infielder/outfielder Charlie Culberson was recalled from Triple-A Oklahoma City.

There are currently 11 players on the Dodgers’ disabled list, matching their high-water mark for the season (first accomplished in April). The 11 players have 2016 major league salaries in excess of $82 million, with a big boost from staff ace Clayton Kershaw.

Culberson is in the Dodgers’ starting lineup today against the Washington Nationals, batting eighth and playing shortstop.

The veteran appeared in 15 games with the Dodgers earlier this season, batting .259 (7-for-27) with two doubles and four RBI, before being optioned on May 18. In 46 games with Oklahoma City this season, he’s hitting .289 with 13 doubles, a triple, two home runs and 19 RBI.

It seemed easy to assume Chris Hatcher’s return to the Dodgers bullpen on Friday after the birth of his son on Thursday meant Adam Liberatore’s stay in the major leagues would last all of one day.

The Dodgers instead decided to keep an eighth reliever and send down catcher Austin Barnes. It didn’t hurt that Liberatore became just the second lefty in the bullpen when he arrived from Triple-A on Thursday. He struck out four of the six batters he faced in the minors, but Liberatore wasn’t thrilled that he landed there in the first place.

“I obviously wasn’t happy about it, but I’m not going to sit here and say ‘One of these guys should be here and I shouldn’t.’” he said. “I felt like I had a strong spring and I just wanted to keep doing my thing and hope for a quick call-up.” END_OF_DOCUMENT_TOKEN_TO_BE_REPLACED