Skip to primary content
Skip to secondary content
BY LANDON NEGRI
STAFF WRITER
Ron Simmons has stepped down as Aquinas girls basketball coach after nine seasons, and assistant Xavier Gomez will replace him, Simmons confirmed Wednesday.
Simmons will continue his position as vice principal at Aquinas, he said. Gomez previously coached at Riverside Notre Dame for 17 years.
Aquinas went 25-2 this season, earned an Ambassador League co-championship and No. 1 seed in the Division 5AA playoffs but was upset in the quarterfinals by eventual Division V state finalist Sun Valley Village Christian.
Under Simmons, a former standout guard at Yucaipa in the late 1980s, the Falcons reached the Southern Section semifinals twice and reached the second round of the state tournament two years ago.
“I need to focus on some personal things – things I have been putting aside for a long time,” Simmons said. “I’ll miss it a lot. The team was a part of my family and that’s kind of the way we ran our program.”

Zoe Casas, above, talks about tying the state career hits mark, which she eventually broke

Zoe Casas has had a storied career at Aquinas, and now she’s winning awards she’s won before. Casas, the 2013 California State Small Schools Player of the Year, has been awarded the honor again, by CalHiSports.com.
Casas, an all-Sun selection, batted .736 for the season, her best batting average of her four-year career and finished with a career total of 251 hits. She is bound for Florida State and also will be on the all-time state list for career batting average (.681) and runs scored (193).
Earlier, CalHiSports named Yucaipa coach Dave Kivett, The Sun Coach of the Year, as the Large Schools State Coach of the Year for leading the Thunderbirds to the CIF-SS Division 2 title.

Chris Ybarra, above, had 7 seniors play their last high school game on Thursday.

It’s a tradition at Aquinas to do this after the last game of the year, the seniors hugging the underclassmen.

The rain fell, but Aquinas senior softball player Zoe Casas did was she always does: she hit.
Casas went 3-for-3 as Aquinas downed Loma Linda Academy 8-0 in a four-inning, rain-shortened game at Aquinas High School.
Aquinas (21-3 overall, 13-1 Ambassador League) earned a share of the league title.
The hits gave Florida-State bound Casas 244 for her career, setting a new CIF-SS career mark, breaking the old mark of 242 set by Santa Ana Mater Dei’s Kelsey Kollen from 1995-98. She tied the state career record, set by Brenna Moss of Bakersfield North from 2008-11.

“It means so much to me,” she said. “It means my hard work and dedication has actually paid off, to do something for my small school.”

“You share a league title, seven in a row,” Aquinas coach Chris Ybarra said. “That’s something to be really proud of. On top of that, you want Zoe to break the record, and she gets three hits.”

Thursday’s was Aquinas’ last regular season game, so Casas will have a chance to break the state record in the first round of the playoffs next Thursday. Casas has a hit in every game this season, has at least two hits in 19 straight games and is batting an incredible .740.

Above, highlights of Ontario Christian’s 2-1 win over Aquinas in 9 innings

Above, Aquinas coach Chris Ybarra talks after the loss

Tuesday’s Games, 7 p.m.
BOYS BASKETBALL
OPEN DIVISION
No. 3 Etiwanda at No. 2 Los Angeles Fairfax
DIVISION I
No. 6 Torrey Pines at No. 2 Chino Hills

GIRLS BASKETBALL
DIVISION I
No. 5 Cajon at No. 1 Ventura

Aquinas football coach Chris Ybarra has stepped down, and assistant coach Jordan Brusig has been named his successor.

“The future is bright. There’s a lot of returning players as well as good athletes who will work hard. It’s going to be just like every other year, where our players will work hard in the offseason to prepare for the upcoming season. It’s going to be positive,” said Ybarra in the press release.
Ybarra said Brusig, who graduated from Aquinas in 2005 after playing for former head coach Josh Henderson, has been his assistant head coach/defensive coordinator the three years that Ybarra was the head coach. Ybarra was 14-16-1 as Aquinas’ head coach, making one playoff appearance in 2012. He will continue as the school’s athletic director and softball coach. 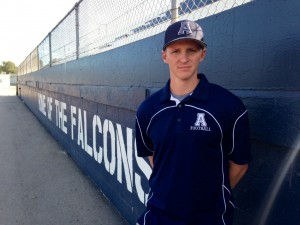 “I’m glad that I was the one that they picked to take over this job,” said Brusig in the press release. “…One of my biggest hopes for next season is to restore our winning ways, as well as the tradition and pride in Aquinas as a school and in the football program.”
When Ybarra took over as football coach, he did keeping in mind that he would find a successor.
“I wanted to keep continuity in the program,” Ybarra said. “Then find someone who could take over. I feel he (Brusig) is ready.”

My take: While I don’t know Jordan Brusig, I know Chris Ybarra and he had a lot on his plate. Not only was he head football coach, head softball coach, and athletic director, but he also ran a Saturday league for the Archdiocese. And he’s got 2 daughters at the school. So having someone who can devote more of his time to the football program will be good for the Aquinas football program, and for Chris Ybarra.

Sophomore Zoe Casas of CIF-SS Division 5 softball champion Aquinas was The Sun’s Player of the Year for 2013.

She now has yet another honor: she was named Cal-Hi Sports’  Small Schools State  Player of the Year. Her statistics again: .663 batting average, 63 hits, 50 runs scored, 11 doubles, eight triples and two home runs. The Florida State-commit was one of two Inland Empire players to win a state award: Norco’s Kylie Reed was the overall State Player of the Year.

Earlier, Casas’ team had already won an award, being crowned state champions by Cal-Hi Sports after the Falcons were ranked No. 1 in the Cal-Hi Sports’ final Division IV rankings.

Although it was a tight game, there was not nearly as much drama as Ontario Christian’s quarterfinal win over Templeton when the Knights recorded a triple play and got the benefit of a call when a Templeton runner failed to touch home plate.

This time, the big difference was extra-base hits. Oak Hills had nine hits, including four doubles and a home run. Ontario Christian had seven hits, all singles.

Here is how things shape up for Sun baseball and softball teams in the CIF-SS Finals.