What are your thoughts on Looney’s fit with the defending champs?

“You can never predict the draft, and you don’t really have any say of where you go. it’s one of the first times. These guys pick their AAU, pick their high school, pick their college. it’s a different experience for them. You go in the draft, and now you get a chance to go in the first round. You get picked by the defending champs, an organization like Golden State — it just doesn’t get much better than that.

“We said the same thing last year in regard to Kyle (Anderson going to the Spurs). I think if you talk to Kyle — he didn’t play a whole lot this year, he got some minutes — but being a part of that franchise, it was an incredible year for him. I couldn’t be happier for Kevon, because he’s going to a terrific organization.”

Did concerns about Looney’s health depress his draft stock?

“There’s no question. He definitely dropped because of that. Fortunately, he dropped into a great situation, being with the franchise he’s with. But I definitely think those were some concerns. I had to field an awful lot of phone calls in the last week or two, and all of my comments were the same. END_OF_DOCUMENT_TOKEN_TO_BE_REPLACED

Finally, he and his party stood and left their table. More than 20 picks had come and gone already in the 2015 NBA Draft, and Looney — once talked about as a potential lottery pick — was still without a home.

But a few minutes later, that changed. His agent had heard word that the Golden State Warriors were about to select the UCLA forward with the No. 30 pick. Looney and his family zipped back.

“It was just nerveracking,” Looney said later. “I got a little stiff and sore; I was sitting there a long time. It was a long wait. You never know what’s going to happen.” END_OF_DOCUMENT_TOKEN_TO_BE_REPLACED

Kevon Looney is among the 19 players who accepted invites to Thursday’s NBA draft. How long will his green-room wait last?

Once considered a near-certain lottery pick, many mock drafts have since dropped the former UCLA forward to borderline top-20 status.

“Ten years from now, I think Kevon Looney may be the best player from this year’s draft coming out of the Pac-12,” MacLean said. “I really like him. You just don’t see guys with the length, the rebounding, the instincts. … The way he was used at UCLA, you didn’t see the entire package.”

MacLean’s projection is optimistic, but not all that outlandish. After all, the only other Pac-12 product with lottery potential is Arizona’s Stanley Johnson — a strong defender who likely won’t turn into an elite scorer.

But many questions surround Looney’s draft stock as well, some of them not helped by the Bruins’ game plan. END_OF_DOCUMENT_TOKEN_TO_BE_REPLACED 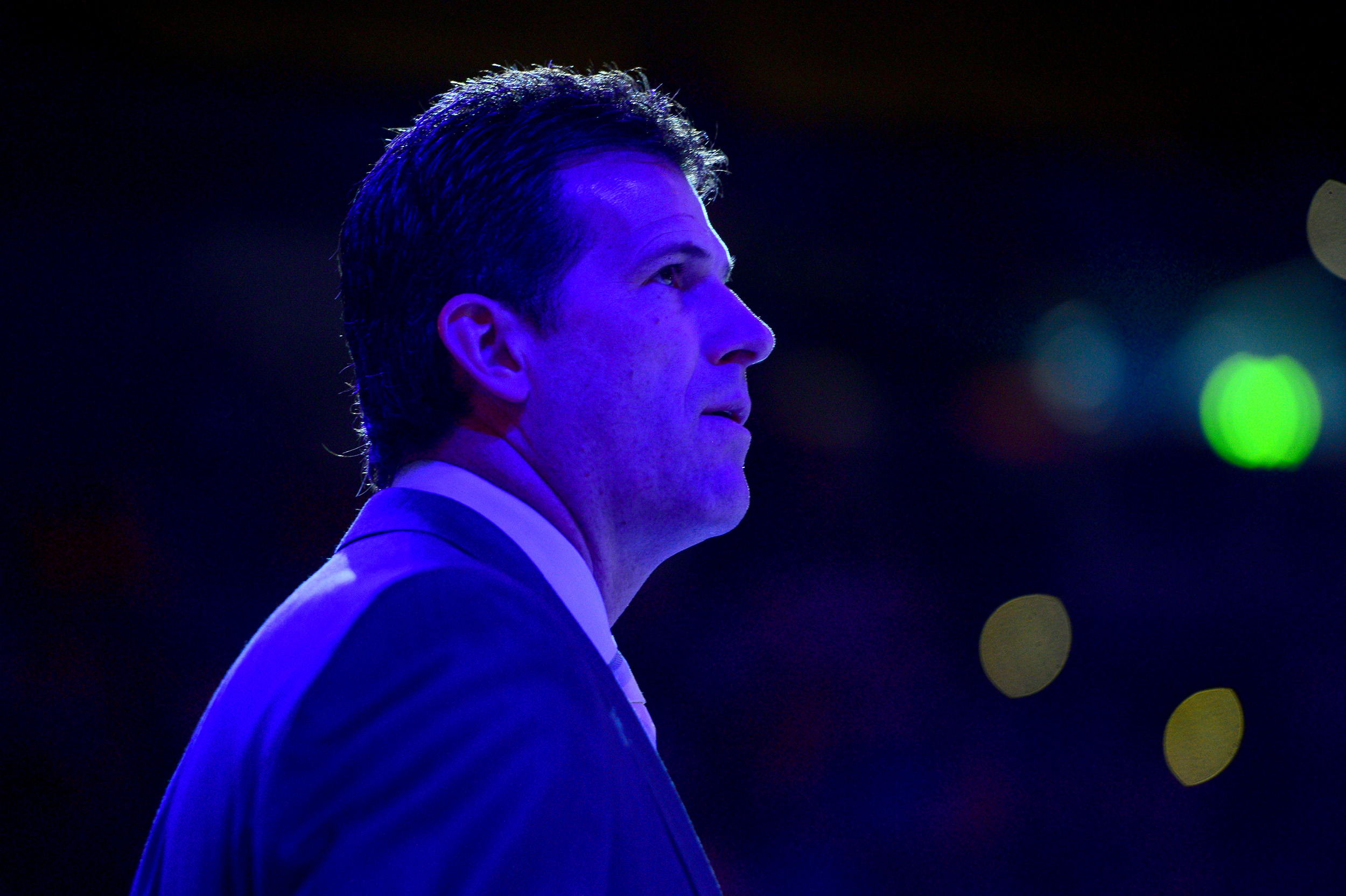 UCLA head coach Steve Alford stands during the introductions before the Bruins’ 72-63 win over Oregon on Feb.14, 2015. (Michael Owen Baker/Staff)

This morning, UCLA men’s basketball ran an instructional clinic with Special Olympic athletes at Pauley Pavilion. A group of UCLA students regularly run the clinics every Saturday, and had reached out to the team to collaborate this weekend. The Special Olympics World Summer Games will be held in Los Angeles from July 25 to August 2.

After the session on Saturday, UCLA coach Steve Alford talked about participating in the event and the state of his program — including thoughts on Jonah Bolden’s role, and whether or not point guard Bryce Alford might be taken off scholarship.

On being involved with the Special Olympics:

“The more you give, the more you get out. I’ve been involved with the Special Olympics since 1984, when I got back from Los Angeles being a part of the Olympics. … Every stop I’ve made, I’ve been involved with it. Anytime that they reach out to us, and we get a chance to be around the Special Olympians, we want to do that. Give them a chance to run down Pauley Pavilion. It’s not like any other court. It’s a special time for these kids to be able to do that. …

On how he feels about state of UCLA’s roster heading into his third season:

“Good. Our freshmen get here about the 20th, 21st of this month. [Four-star guards Aaron Holiday and Prince Ali, three-star forward Alex Olesinski, JUCO transfer center Ikenna Okwarabizie] Once we get those guys in, it’s as full a roster as we’ve been able to have. We’ll have a minimum of 11 guys on scholarship, and I haven’t had that since I’ve been here. END_OF_DOCUMENT_TOKEN_TO_BE_REPLACED

Former UCLA players Norman Powell and Josh Smith worked out for the Lakers yesterday, and our beat reporter Mark Medina got the updates:

» Norman Powell sees himself as “NBA ready” after four years in college. He’ll work out with about 20 teams through the draft evaluation process.
» Center Josh Smith, who transferred to Georgetown six games into his junior year at UCLA, admits that he was “lazy” as a college player.