The Bruins fell to Oregon, 76-68, in yet another game that showed off the team’s now-unsurprising inconsistency. In the first half, they held the league-leading Ducks to 35.7 percent from the field, while shooting 54.8 percent. In the second featured almost a mirror image: Oregon rose up to 54.8 percent, while UCLA slid down to 42.9.

“Defensively, we worked, and most of it was zone,” said Bruin head coach Steve Alford. “Most of where they got us was in transition. This is the best team in our league, and we shot a high percentage. We just didn’t make enough big plays in the end to get over the hump.”

That zone defense, Parker said, was one reason why the Bruins gave up a 40-28 edge on the glass. The Ducks grabbed 12 offensive rebounds and scored 10 second-chance points.

“The ball goes up, it’s not like five-on-five, where you pretty much know who you’re boxing out every time,” Parker said. “In zone, it could be a different player every time. Sometimes, I might be out on the 3-point line boxing out somebody. … It’s just a different adjustment. We didn’t make it in the second half, but they did.”

Tony Parker returned to UCLA’s starting lineup last Saturday, helping the Bruins to a 77-53 win over Colorado. The senior center will keep that role for at least one more game.

Steve Alford said Tuesday that he will keep the 6-foot-9 Parker in his starting five for Thursday’s 6 p.m. tipoff at Cal — relegating 7-foot sophomore Thomas Welsh to the bench. The third-year head coach emphasized that his changes over the last month have not been made to penalize either player.

“Whether it’s Tony or Tom, it’s not a discipline or punishment standpoint,” Alford said.

He added that he is also open to playing both Parker and Welsh together again in a “big-big” lineup if the matchup proves beneficial. The combination, which UCLA used for most of the season before making sophomore Jonah Bolden its starting power forward, gave the team some offensive advantages at the cost of its defense.

Regardless of who Alford plays, he’ll need to figure out how to beat a Cal team that is 16-0 at Haas Pavilion this season. The Bears hold opponents to just 38.8 percent from the field, easily the lowest mark in the Pac-12, and also rank first in the conference in defensive efficiency according to Ken Pomeroy. Alford praised their athleticism and their size, pointing out the presence of star freshman Ivan Rabb as well as 7-footers Kameron Rooks and Kingsley Okoroh.

“They really just tee it up one-on-one and say, ‘You’re not gonna beat us one-on-one,'” Alford said. “That’s a great thing to have, because you don’t see them having to help a lot. And because they don’t help a lot, they don’t give up a lot of open looks. They make open looks hard on you.”

UCLA point guard Bryce Alford and center Tony Parker — who returned to the starting lineup on Saturday — talk about the Bruins’ much-needed 77-53 win over Colorado.

Steve Alford talks about UCLA’s 77-53 win over Colorado on Saturday, the decision to move Tony Parker back into the starting lineup, and the Bruins’ daunting road toward an NCAA Tournament bid. 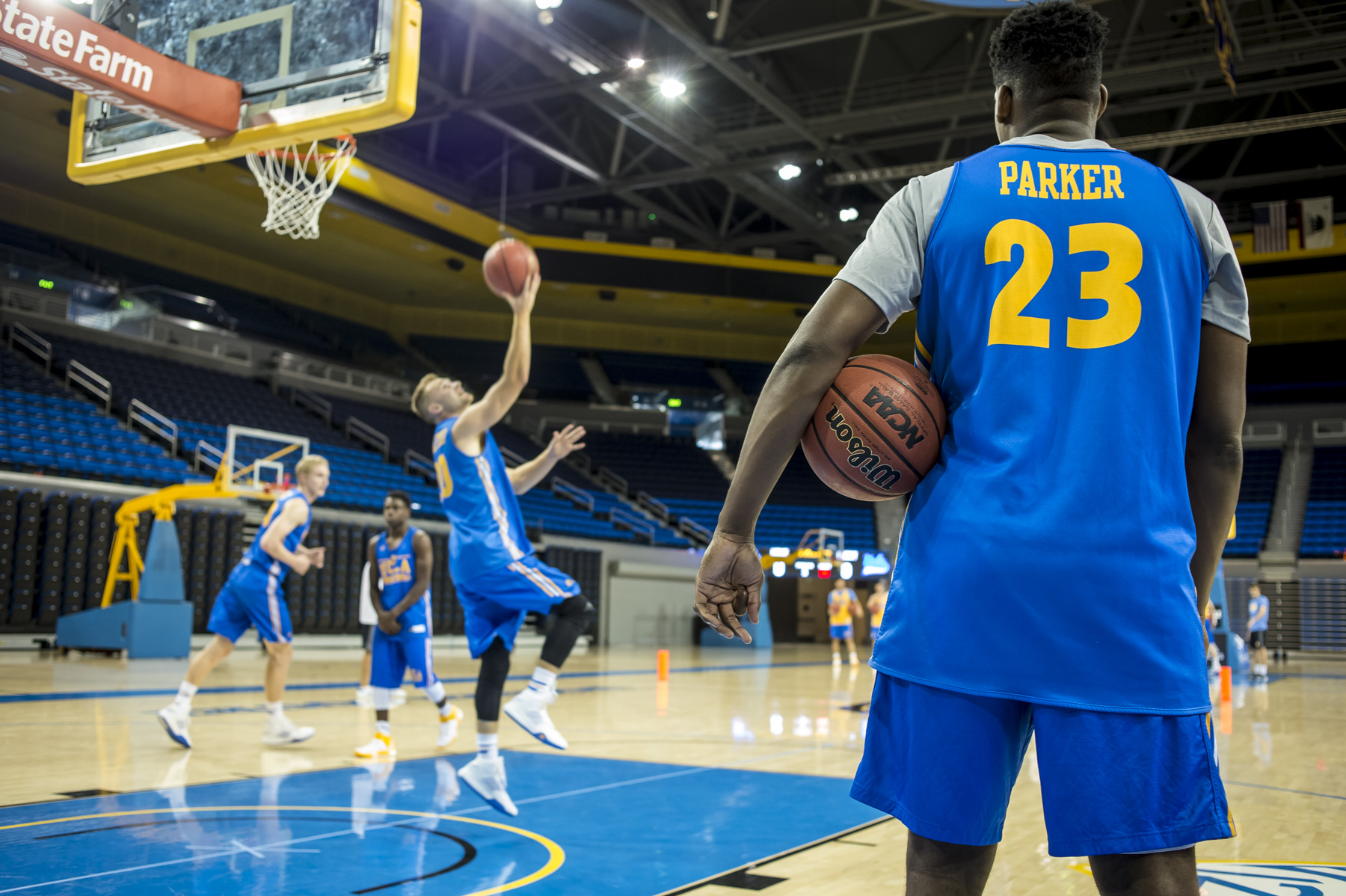 After five games on the bench, UCLA’s Tony Parker is back in the starting lineup — though not at his old spot.

Against Colorado on Saturday night, the 6-foot-9 big man became the Bruins’ No. 1 center, filling the role for the first time as a senior. For much of this season, the former four-star recruit played as a power forward next to 7-foot sophomore Thomas Welsh. In the last five games, he took to the bench as head coach Steve Alford finally abandoned the “big-big” lineup — one that had become too much of a defensive liability.

Forward Jonah Bolden remained in the starting lineup for the sixth straight game, while Welsh became the team’s backup center for the first time this season. Earlier this week, Bolden was asked how playing next to Parker rather than Welsh changes his role on offense.

Against the Buffaloes, the Bruins are (14-12, 5-8) trying to climb back to .500 in conference play in the midst of the most underwhelming season of the Alford era.