Abner Mares of Hawaiian Gardens has suffered just one loss in his professional career, but it was a devastating one. It happened Aug. 24, when he lost his featherweight world title when he was knocked out in the first round by Jhonny Gonzalez of Mexico at StubHub Center in Carson.

Mares has not fought since, but he’ll lace up the gloves again when he takes on Puerto Rico’s Jonathan Oquendo (24-3, 16 KOs) in the featherweight semi-main event July 12 at MGM Grand in Las Vegas (on Showtime pay-per-view). Headlining will be former super welterweight champion Saul “Canelo” Alvarez of Mexico taking on Erislandy Lara of Cuba.

When Mares (26-1-1, 14 KOs) steps in the ring against Oquendo, it will have been nearly 11 months since he was demolished by Gonzalez. Mares claims he is ready to rumble.

“It’s been a long time, but I can’t wait to step into the ring and hear my name called again,” Mares, 28, said. “Jonathan Oquendo is a respectable fighter and I know he’s coming to win. But  he is in the way of another world title, so I have to get him out of there.” 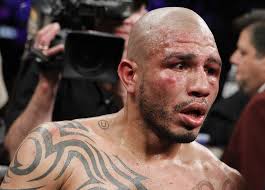 HBO’s 24/7: Cotto/Martinez featuring an inside look at Miguel Cotto and Sergio Martinez ahead of their June 7 middleweight title fight at Madison Square Garden in New York City, will debut Saturday night on HBO. The second of two episodes is on tap for June 5 – a week from Thursday – and two days before the fight that will be available on HBO pay-per-view.

Martinez (51-2-2, 28 KOs), of Argentina, will be attempting to make the second successful defense of the title he took from Julio Cesar Chavez Jr. in September 2012. Cotto (38-4, 31 KOs), of Puerto Rico, will try to become the first fighter from the island to win world titles in four weight classes.

Hard-hitting light heavyweight champion Adonis Stevenson of Canada will be the favorite Saturday night when he defends his belt against Andrzej Fonfara of Chicago via Poland from Bell Centre in Montreal.

The two figure to square off about 8-8:30 p.m. Pacific time in a fight that will be televised lived by Showtime.

Promoter Bob Arum of Top Rank Inc. has extended his promotional contract with Manny Pacquiao, and it will now run through 2016.

“We are pleased that together with our partners at HBO we will continue presenting to the public fights of the great Manny Pacquiao through the end of 2016,” Arum said in a statement.

Pacquiao’s contract was due to expire at the end of this year. He recently won a rematch against Timothy Bradley, along with it the welterweight championship. His next fight could be a fifth go-round with Juan Manuel Marquez, who will be offered the fight, Arum said. However, Marquez said after his unanimous-decision victory over Mike Alvarado on Saturday at the Fabulous Forum that he will confer with his team and family members before deciding if he wants it.

Marquez is 1-2-1 against Pacquiao. Marquez knocked Pacquiao cold with one punch in the sixth round of their fourth fight in December 2012.

If you don’t have a ticket, catch the Juan Manuel Marquez-Mike Alvarado welterweight main event Saturday night from the refurbished Fabulous Forum in Inglewood on HBO.

The winner of this bout is expected to be offered a fight with welterweight champion Manny Pacquiao.

Chris Arreola of Riverside on Saturday will take on Bermane Stiverne for a vacant heavyweight world championship at Galen Center in Los Angeles (on ESPN).

Arreola was reminded during a recent conference call about a sparring session he had with Hasim Rahman in August 2006 ahead of Rahman’s loss to Oleg Maskaev for a heavyweight title that month at Thomas & Mack Center in Las Vegas.

As story goes, Arrreola was really going at it with Rahman in a Big Bear training camp. Afterward, Rahman apparently told a reporter that he expected Arreola to someday become heavyweight champion. Arreola never heard that, but he was stoked to find out about it.

“Well, first of all, that’s an honor, man, because I never knew he said that about me, man,” Arreola said. “And that’s a big honor to hear that because, honestly, I was there and I was working, man, and I loved being up there in his training camp, man. That’s the first big training camp I was ever involved in, and I watched him work, and I watched him work real hard. And one thing I do remember is that every time I got in that ring I wanted to make sure I gave him my all, because I didn’t want to go home. I wanted to keep getting those paychecks every week.”

This will be Arreola’s second chance to make Rahman’s prediction come to fruition. Arreola was stopped after 10 rounds in a challenge to then-heavyweight champion Vitali Klitschko in September 2009 at Staples Center.