Dan Goossen/Photo by of Associated Press

News broke over the weekend that longtime promoter Dan Goossen was critically ill and Monday morning word came that Goossen had died at the age of 64 of liver cancer.

A statement was released on behalf of the Goossen family.

“It is with overwhelming regret that we announce the passing of Dan Goossen, 64, from complications relating to liver cancer. The sudden news of his diagnosis was very much a private matter and his final days were spent surrounded by his family and closest friends. Sadness is difficult to escape as we grieve his passing. However, we are filled with pride by the fact that Dan Goossen battled this aggressive illness with boundless strength and the last days of his life were fought and lived with unflinching bravery, pure love and grace beyond measure,” the statement read.

Goossen was president of Goossen Tutor Promotions in Sherman Oaks. Among the world-class fighters he promoted over the years were Michael Nunn, Chris Arreola, Andre Ward, Floyd Mayweather Jr. and brothers Gabe and Rafael Ruelas.

More than 300 bleacher seats have been added for the Oct. 18 middleweight title fight between champion Gennady Golovkin of Kazakhstan and Marco Antonio of Mexico at StubHub Center in Carson (on HBO).

“After meeting with StubHub Center this week we were able to add an additional 324 bleacher seats on the concourse level,” said Tom Loeffler, managing director of K2 Promotions, which promotes Golovkin. “With the balance of the venue virtually sold out, we’re attempting to accommodate as many fans as many fans as possible for this event.”

Saul “Canelo” Alvarez on Tuesday signed an agreement to return to HBO beginning with his next fight in December, the interested parties announced.

Alvarez, an ultra-popular former super welterweight champion from Mexico, fought seven times on HBO between 2010 and 2012. He moved over to Showtime after his promoter – Golden Boy Promotions – and HBO had a falling out and HBO said it would no longer work with Golden Boy.

That edict eased when HBO signed on to televise the upcoming light-heavyweight title fight between Golden Boy’s Bernard Hopkins and Sergey Kovalev on Nov. 8 in Atlantic City.

Alvarez has fought his five most recent fights on rival Showtime. Terms of his new agreement with HBO were not disclosed.

“For all of my career, I have wanted to fight on HBO for one main reason –  I believe it will allow more of my fans to see me in action,” said Alvarez, who is 44-1-1 with 31 knockouts. “Today marks a huge milestone for me, and I look forward to a long and successful partnership with HBO.”

“I’m thrilled to be part of this historic agreement between ‘Canelo’ Álvarez and HBO Sports, an agreement that marks another major step in Golden Boy Promotions’ primary goal to give boxing fans the fights they want to see,” he said.

“Everyone at HBO is excited to welcome back ‘Canelo’ Álvarez to the HBO family, and we can’t wait to re-introduce him to our subscribers,” Hershman said. “At only 24 years old, ‘Canelo’ has already established himself as one of the boxing world’s brightest stars, and we look forward to a long and mutually beneficial relationship as we embark on this new chapter together.”

K2 Promotions on Friday announced standing-room only tickets for the Oct. 18 middleweight title fight between champion Gennady Golovkin and Marco Antonio Rubio at StubHub Center (on HBO) would go on sale immediately.

“The response to this event has been unprecedented for boxing at StubHub Center as (with) four weeks to go we’re virtually sold out of tickets,” said Tom Loeffler, managing director of K2 Promotions. “Therefore, we’re putting a limited number of standing-room only tickets on sale to meet demand.”

LAS VEGAS  – Floyd Mayweather Jr. says he believes the NFL should have stuck with its original discipline of Ray Rice, saying the league was overly influenced by new video showing Rice knocking out his then-fiancee in an Atlantic City casino elevator.

The boxing superstar — who has had his own domestic abuse issues — said Tuesday he didn’t feel the original two-game suspension should be changed because of video.

“I think there’s a lot worse things that go on in other people’s households, also,” Mayweather said. “It’s just not caught on video, if that’s safe to say.”

Mayweather, who spent two months in a Las Vegas jail in 2012, still maintains his innocence even after pleading to reduced domestic abuse charges stemming from an attack on his former girlfriend while their children watched. Had Mayweather not taken the plea bargain, he would have gone to trial on felony charges that could have gotten him up to 34 years in prison.

Mayweather was also named in a civil lawsuit last week by his former fiancee, who said the fighter assaulted her and kept her from leaving his Las Vegas mansion. Shantel Jackson also said the boxer publicly humiliated her by posting a sonogram showing her pregnant with twins online, and then claiming she aborted them.

Mayweather said he has been falsely accused many times. 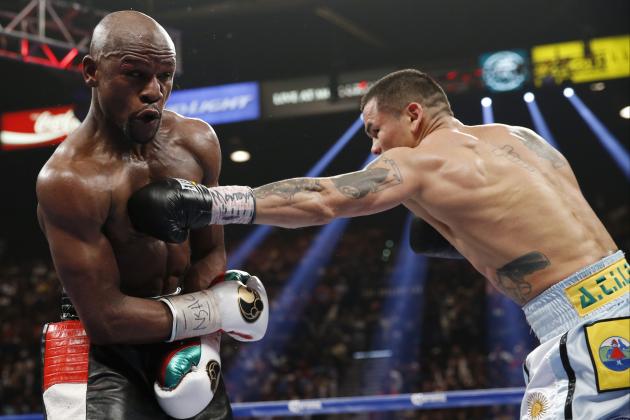