Alex Guerrero was on the Dodgers’ plane to Sydney, Australia, but might not be on the Opening Day roster. (Associated Press photo)

In case you missed it somehow, the Dodgers announced their travel roster Sunday before boarding a flight to Sydney, Austrlia.

I didn’t have time or space for a longer analysis of the 30 names yesterday, but one is probably needed.
END_OF_DOCUMENT_TOKEN_TO_BE_REPLACED 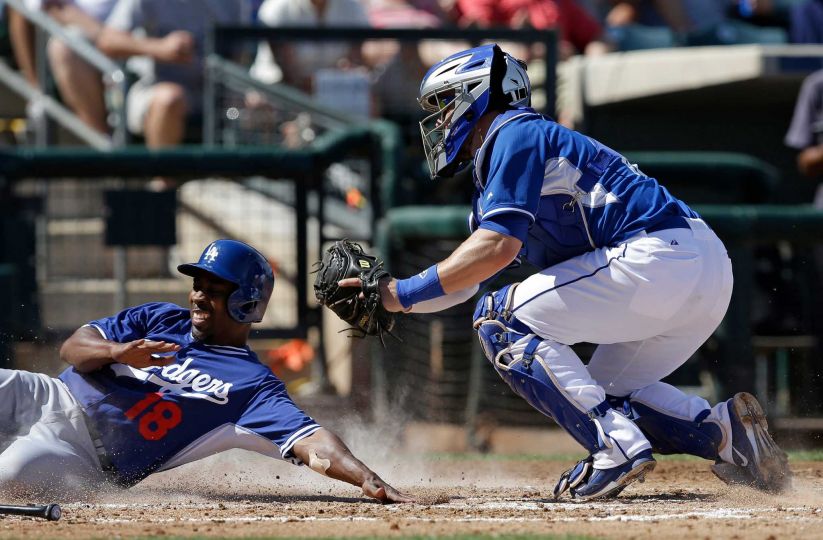 Chone Figgins went 6 for 36 in Cactus League play for the Dodgers. He was added to the team’s 40-man roster on Sunday. (Associated Press photo)

GLENDALE, Ariz. — The Dodgers had to be a bit creative in compiling the list of 30 players who will travel to Sydney, Australia for the first two games of the season.

As with many Dodger problems, this was a good problem to have. Too many options are always better than too few in the eyes of a team that carried eight starting pitchers on guaranteed contracts into camp a year ago, seven this year, and have a four-outfielder “dilemma” that makes for good sports-talk radio fodder.

First, the big move: Javy Guerra was designated for assignment and Chone Figgins was added to the major-league roster. The team’s closer coming out of spring training as recently as 2012, Guerra made seven Cactus League appearances, most recently Saturday against the San Diego Padres, and went 1-0 with a 2.25 earned-run average. He allowed nine hits and walked four batters in eight innings. Combined with the fact that he was out of options, that wasn’t a strong enough camp to move Guerra up the depth chart.

Guerra made just nine major-league appearances last year and allowed nine runs. The 28-year-old right-hander made more appearances for Triple-A Albuquerque after ceding the closer’s job to Kenley Jansen midway through the 2012 season.

“It just kind of came down to numbers really in spots,” Dodgers manager Don Mattingly said. “He’s kind of been back and forth the last couple years. Obviously Javy’s a guy that I like. His stuff always plays. I feel like he’s a big league pitcher. Javy getting designated (for assignment) speaks to our depth — Chris Withrow and (Jose) Dominguez and some guys that you end up keeping.”

The Dodgers have 10 days to decide whether to place Guerra on waivers, trade him, release him or outright him to the minor leagues.

Figgins hasn’t played in a regular-season game in the majors since 2012, when he hit .181/.262/.271 in 194 plate appearances with the Seattle Mariners. His bat in camp wasn’t much sharper; he’s hitting .167 (6 for 36) with five singles and a double. Figgins hasn’t lost his eye at age 36. He’s drawn nine walks and carries a .326 on-base percentage, and that in turn drew praise from Mattingly earlier in the day.

Here’s the complete list of 30 players who will be making the trip:

Note that Figgins, who’s listed as an infielder, can play all three outfield positions. Baxter and Van Slyke, both listed as outfielders, have seen time at first base in camp.

I’ll take an in-depth look at the travel roster, what it means, and what it means for the players who were left off, in my next blog post. 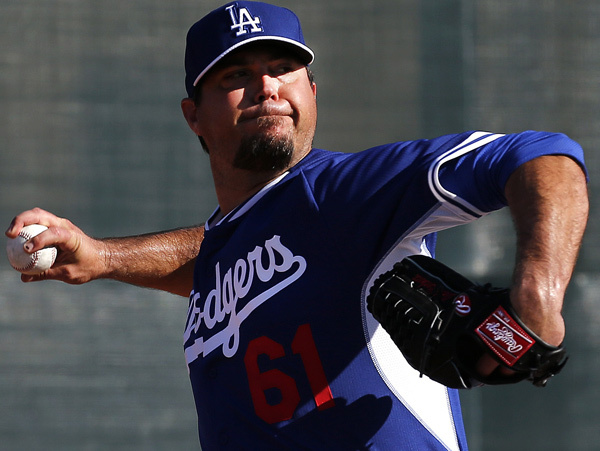 MESA, Ariz. — Josh Beckett was hoping for more out of his third Cactus League start than three innings and 44 pitches.

Because of a right thumb contusion that worsened as the game went on, Beckett was pulled Friday against the Chicago Cubs before reaching his four-inning, 65-pitch target. The veteran right-hander was already staying away from throwing curveballs, the pitch that gave him the most discomfort, before head athletic trainer Stan Conte and manager Don Mattingly decided to pull him altogether.

Beckett doesn’t think the injury is serious but said he’ll visit a doctor next week if needed.

“It’s frustrating but it could have happened at a worse time,” he said. “I think right now we’re dealing with it the best we can. If I need a couple days off, we’ll do that. I just don’t want to fall too far behind.”

The injury isn’t related to the right thumb ligament that bothered Beckett in Boston early in the 2012 season with Boston. That injury affected the inside of his right thumb; this one affects the outside, he said.

Eleven days ago, Beckett’s right thumb “got slammed on the outside of a door,” he said. “Somebody was opening the door and — you know how they have signs that say ‘in’ and ‘out’? Somebody came out the in.”

In spite of the injury, Beckett’s fastball and changeup were effective against the Cubs. He allowed one hit, an infield single by Emilio Bonifacio, walked two and struck out one in three scoreless innings.

Beckett and right-hander Zack Greinke have both been ruled out from making the trip next week to Sydney, Australia, leaving the Dodgers with four healthy starters — Clayton Kershaw, Hyun-Jin Ryu, Dan Haren and Paul Maholm — one week before the beginning of the regular season.

Fortunately, the schedule will allow the Dodgers to can get with on four starters until mid-April. Beckett shouldn’t need that long.

After Beckett and Cubs starter Kyle Hendricks were pulled with the score tied 0-0, both offenses came awake against the bullpens. Jamey Wright (four runs allowed in the sixth inning) and Javy Guerra (walk, single, RBI groundout in the fourth) allowed all the Cubs’ runs.

The Dodgers (5-9-4) clawed back to make the game close. Miguel Rojas doubled and scored on an RBI triple by Dee Gordon in the fifth inning. Alex Guerrero hit a two-run double off Jose Veras in the seventh inning. Drew Butera hit a solo home run to center field off Alberto Cabrera in the ninth inning to provide the final score.

Some more notes and observations:
END_OF_DOCUMENT_TOKEN_TO_BE_REPLACED 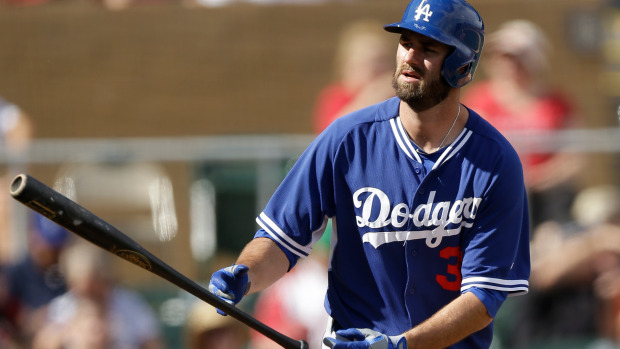 SURPRISE, Ariz. — There’s a good reason not to take spring training statistics seriously, a reason that was on full display Tuesday at Surprise Stadium.

Louis Coleman made 27 appearances out of the Kansas City Royals’ bullpen last year. He allowed just two runs, posting a puny 0.61 earned-run average for the season. The right-hander has 117 career appearances and has only once allowed more than three runs to score in a single inning.

But in the ninth inning against the Dodgers, Coleman was pulverized by several players who have never made a major-league at-bat. Alex Guerrero hit a triple off the top of the center-field fence, roughly 400 feet from home plate. Joc Pederson walked and Noel Cuevas (surprise!) followed with a three-run home run. Aaron Bates (who has 11 career major-league at-bats) and Trayvon Robinson singled. The inning ended on a diving catch of a Mike Baxter line drive to right field.

That’s how the Dodgers (5-6-4) rallied from their second deficit of the game to beat the Kansas City Royals 7-5.

Scott Van Slyke hit a two-run home run to deep center field in the eighth inning, his second Cactus League home run. In another spring anomaly, Dodgers right-hander Javy Guerra was the winning pitcher in his worst outing of the year. He allowed two runs (one earned) in the eighth inning, as well as two hits and a walk.

Dodgers starter Dan Haren allowed seven hits, all singles. Haren issued a walk, he said, on an experimental cut fastball that missed the corner to Lorenzo Cain. It was one of 11 walks in the game.

“He’s down and still under control,” Dodgers manager Don Mattingly said of Haren. “Looks like he’s controlling the strike zone for the most part. The guy was fairly tight behind the plate, we thought, but both ways. He was consistent, but a lot of those balls were good throws that were down in the zone, just not getting them.”

Haren was pleased with the results, too.

“Last year, beginning of the year, I was haunted by the home run, just leaving too many balls up out over the plate,” he said. “Second half, I was keeping the ball down and getting results more like today — a lot of ground balls.

“It’s more of just a mindset, more of an execution thing. Making sure when I miss, I miss down in the zone like I did today. Trying to work to get ground balls and in big spots not trying to do too much. If I have to walk a guy, I walk a guy. … The split is more of a waste pitch, but last year at the end of the year, I threw any pitch in any count.”

Haren said he felt well enough to throw another inning, but is a bit more tired than usual for this point in spring. The Dodgers still haven’t decided whether or not Haren will be on the flight bound for Sydney on Sunday.

If Haren isn’t on the plane, he hopes that “maybe (I can) take an extra day or two where I can back off a little bit because I’ve pushed it hard to this point.”

The box score is here. Some more notes and observations:

END_OF_DOCUMENT_TOKEN_TO_BE_REPLACED 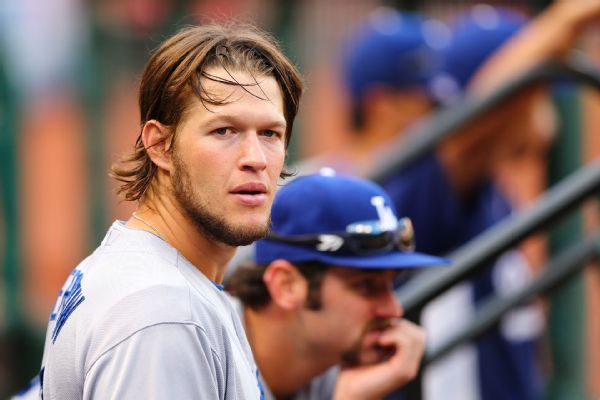