Dwight Howard has plenty on his mind beyond his pending free agency.

He also plans to see a doctor Wednesday to check up on the torn labrum in his right shoulder.

“Hopefully I don’t have to have surgery,” Howard said. “But whatever the case may be, I’m going to do whatever I can to get myself right this offseason.”
END_OF_DOCUMENT_TOKEN_TO_BE_REPLACED

On and on the process went in the Lakers’ exit interviews where players ranging from Kobe Bryant, Dwight Howard and Pau Gasol provided both positive and negative feedback surrounding the Lakers’ 2012-13 season. Considering that once-hyped campaign surrounding four future Hall of Famers ended in a tireless list of injuries and a first-round sweep, Kupchak’s work to help restore the Lakers to championship greatness again just begins.

What will he do?

“When you lose everything, is in play,” Kupchak said Tuesday at the Lakers’ practice facility in El Segundo. “”
END_OF_DOCUMENT_TOKEN_TO_BE_REPLACED

Before settling into his seat in front of a horde of microphones and cameras, Kobe Bryant entered the Lakers’ media room on a scooter.

It personified his progress as he’s slowly but surely progressed from a season-ending torn left Achilles. Nearly 2 ½ weeks have passed since suffering what he described as a “sneaky injury”, which kept him out of the season and dashed the Lakers’ championship fortunes. Since then, he’s gone from crutches to wearing a walking boot and had his stitches removed on Wednesday. He’ll likely remain immobilized for at least another two weeks. And the Lakers expect him to return within six to nine months.

But for a player who averaged 27.3 points per game on 46.3 percent shooting and six assists despite injuries, heavy minutes and Father Time creeping up, Bryant sounded confident he can return for the Lakers’ season opener beginning late October. He also sounded optimistic about the big picture.

“We could win a championship,” Bryant said.
END_OF_DOCUMENT_TOKEN_TO_BE_REPLACED 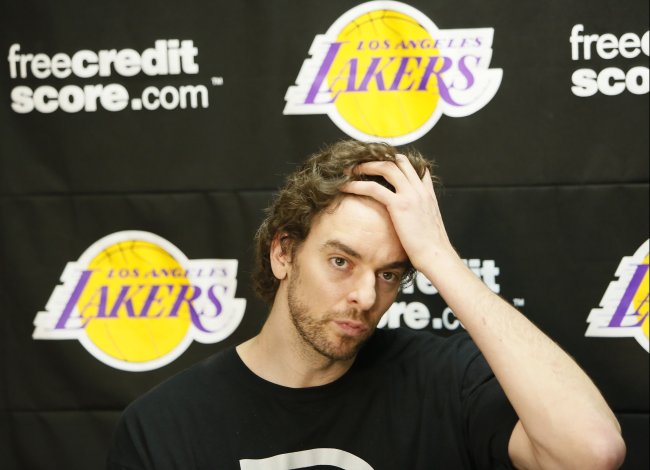 Pau Gasol may have played his last game as a Laker.

Gasol talked for over an hour with Lakers general manager Mitch Kupchak and coach Mike D’Antoni, and the persisting theme involved uncertainty.

Gasol’s used to this after all. He’s been the subject of trade rumors ever since the Lakers traded him two years ago in a trade that would’ve sent Chris Paul to the Lakers. But the NBA nixed the deal, which Gasol described as “pretty random.”

The Lakers refused to deal Gasol this season. But with harsher luxury taxes on the horizon stemmed from the new labor deal, Gasol’s $19.3 million contract could be too burdensome. The Lakers may waive him using the amnesty provision or a trade. But Gasol said he refused to press the issue on his future.

“It’s hard to tell,” Gasol said. “The team has shown they would like to keep me and understand a lot of factors. Those factors cannot be ignored. It’s still early. Mitch has to talk to ownership and makes a lot of decisions.”

It appeared Dwight Howard’s future could tie into whether the Lakers keep Gasol. The Lakers could be without two critical post players if they deal Gasol and Howard decides to leave. Keeping both could sap the Lakers’ finances. But Gasol sensed from his conversation with Kupchak the thought process isn’t “100 percent attached to” whether Howard returns or not.

Gasol also acknowledged initial frustrations working with Lakers coach Mike D”Antoni, who featured him as a reserve for six games and featured him as a stretch forward. But Gasol sounded content with his late-season role, which featured him starting alongside Howard both as a post player and as a faciliator.

Gasol has other things on his mind beyond his future.

He plans to visit doctors soon on the plantar fascia in right foot and knee tendonosis, injuries that contributed him to missing 33 games. Gasol also plans to release a photography book later this year that delves into off-court life in hopes to inspire others.

But as it has been for the past two years, uncertainty awaits.

“I prefer to stay,” Gasol said. “I’ve always been a loyal guy. I feel like I belong to the Lakers.”

Nearly 2 1/2 weeks has passed since Kobe Bryant suffered a season-ending torn left Achilles tendon, and the Lakers star has already shown yet another sign of progress.

Bryant tweeted out a photo via Instagram that he had his stitches removed. Since last week, Bryant has occasionally gone off crutches in favor of a walking boot. But Bryant still used crutches when he came out in the waning moments of the Lakers’ Game 4 loss Sunday to the San Antonio Spurs. Bryant also arrived on crutches at the Lakers’ practice facility Monday morning to receive treatment.

Lakers trainer Gary Vitti has estimated Bryant to stay sidelined for at least a month.

Currently rehabbing a surgically repaired left hip that he says feels 80-85 percent healthy, Lakers forward Jordan Hill plans to visit a doctor in Nashville in about three to four weeks.

The Lakers initially estimated Hill would sit out for at least six months after undergoing surgery Jan. 23 on his left hip. But a strict rehab and diet regiment enabled Hill to return to the court in limited minutes in the Lakers’ Games 2, 3 and 4 first-round losses to the San Antonio Spurs.

“I felt great. It was probably a smart thing to keep it rested, but I felt good about it and I just wanted to play definitely in the playoffs,” said Hill, who averaged 3.3 points and 3.7 rebounds in only 10.3 minutes per game. “I went out there and gave it a shot. I feel real good.”
END_OF_DOCUMENT_TOKEN_TO_BE_REPLACED

Lakers forward Antawn Jamison just underwent surgery Tuesday morning to repair ligament damage in his right wrist, an injury he had nursed for the last month of the season.

Not that this affects much of the Lakers’ future. He’s not expected to resign with the Lakers for various reasons. Jamison isn’t interested in accepting the veteran’s minimum ($1.35 million), a drastic cut the 15-year veteran conceded last year for the sakes of winning an NBA title. Jamison may want to stay closer to his children in Charlotte, N.C. And he had an up-and-down relationship with coach Mike D’Antoni over his role.

Jamison also skipped his exit interview with the team on Monday, according to a team spokesman, despite the Lakers’ efforts to contact him. He originally was scheduled to meet with the team on Tuesday, but his the timing of his meeting changed for unknown reasons.

Jamison averaged 9.4 points on 46.4 percent shooting and 4.7 rebounds in 76 appearances.

Jodie Meeks appeared in a relaxed mood, walking out of the Lakers’ practice facility in gym clothing and flip flops.

Yes, it’s the sign that the Lakers are ready to relax after ending a hyped 2012-13 season with a first-round sweep to the San Antonio Spurs. But Meeks’ casual foot attire also reflects the partially torn ligament in his left ankle. Moments after the Lakers guard said in his exit interview that he still doesn’t feel comfortable wearing shoes, Meeks told this newspaper he expects a full recovery will happen within four to six weeks.

“More than anything, it’s just rest,” said Meeks, who will also treat his ankle with ice and electronic stimulation. “The wear and tear of the season is hard.”
END_OF_DOCUMENT_TOKEN_TO_BE_REPLACED

“Whether it’s a free country or not, you should be free to act and do as you want to do, as long as it’s not violent. I came here in a Cookie Monster shirt because I wanted to,” World Peace told reporters at the Lakers’ practice facility in El Segundo. “And I was going to wear the pants but I thought you [media] guys were going to judge me. And I was going to wear the hat, too, but I figured you guys would judge me…. I should have wore it. You should be free to do and act how you want to act.”
END_OF_DOCUMENT_TOKEN_TO_BE_REPLACED

The persistent pain in his hobbled body. The constant adjustment in morphing from a pick-and-roll point guard to an off-ball shooter. And, the losing. Oh, the losing.

All those ingredients made for one unsettling reality for the 39-year-old Steve Nash in assessing his 17 NBA seasons.

“It’s definitely been the most frustrating year of my career, not only with so many expectations to start but just physically not being able to play as much as I like or to go and have the impact that I planned on having this year,” Nash said.
END_OF_DOCUMENT_TOKEN_TO_BE_REPLACED