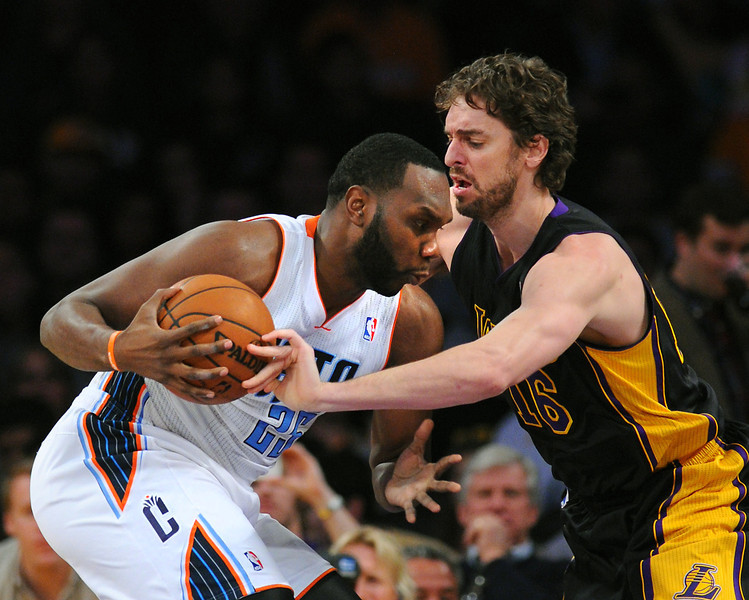 Slowly but surely, Pau Gasol walked down a Staples Center hallway amid a cloud of uncertainty.

It went beyond whether the poor play will ever stop after the Lakers’ 110-100 loss Friday to the Charlotte Bobcats at Staples Center marked the team’s sixth consecutive defeat and 12th loss in 15 games through January. Gasol said he also will receive an MRI on Saturday after experiencing more pain in his injured right groin.

“It felt better with two days of rest and treatment,” said Gasol, whose 24 points on 9-of-17 shooting was offset with shaky defense. “We tried hard to make it feel better. I started doing certain moves and I aggravated it.”
END_OF_DOCUMENT_TOKEN_TO_BE_REPLACED 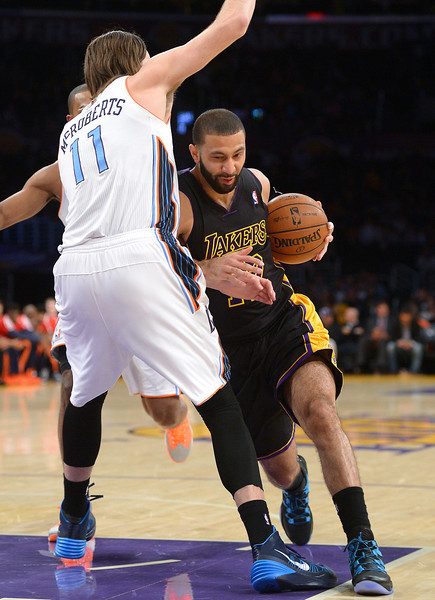 The Lakers’ Kendall Marshall is fouled by the Charlotte Bobcats’ Josh McRoberts while driving in the key, Friday, January 31, 2014, at Staples Center. (Photo by Michael Owen Baker/L.A. Daily News)

1. The Lakers defense remains a never-ending issue. Attention players who love to pad their stats. Attention fantasy basketball owners looking for a quick fix to their lineup. Attention general managers who want to showcase their players as trade bait. All three parties will receive their wish when they match up against the Lakers’ defense, namely, because it doesn’t exist. The Charlotte Bobcats rank 28th overall in total offense (94.1) and played without star guard Kemba Walker because of a sprained left ankle. Yet, Charlotte still looked like an offensive powerhouse against the lowly Lakers.

The Lakers looked weak in every way imaginable. Al Jefferson looked like an All-Star and a physical force with 40 points and 18 rebounds. TThe Bobcats outmuscled them on the boards (49-41) and in points in the paint (64). Even thought the Lakers committed eight turnovers, the Bobcats still dominated the open floor because the Lakers rarely sprinted back on defense. Whether the Lakers played small or big, their defensive issues remain the same. And they’ve offered no signs the broken record will stop.
END_OF_DOCUMENT_TOKEN_TO_BE_REPLACED 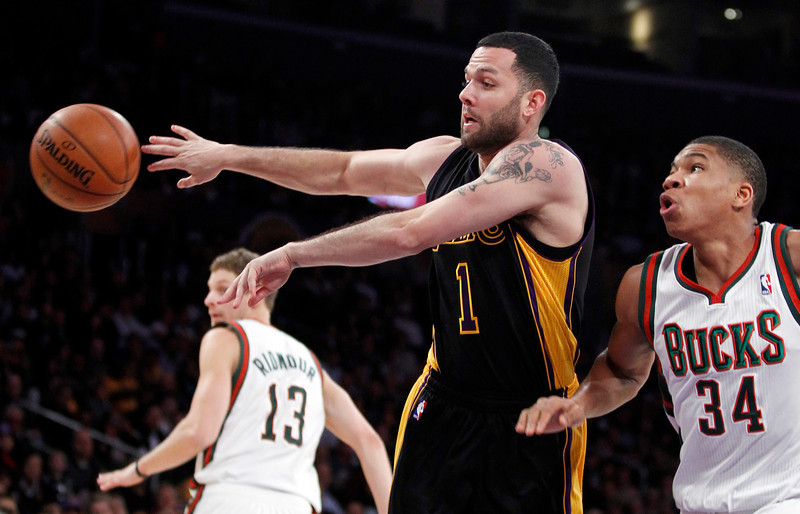 Anytime he sits on the bench or by his locker rooms stall, Jordan Farmar looks restless.

He’s nursed a torn hamstring for the past month, and the only solution toward letting it heal has involved doing nothing. Farmar may have finally ended his withdrawal symptoms from basketball by participating in Thursday’s practice. But it appears the Lakers’ guard will still have to wait before returning.

Lakers coach Mike D’Antoni sounded skeptical Farmar could play Tuesday in Minnesota as the beginning of a three-game trip.

“Farmar is further and wants to be careful with him because of the last time what happened to him,” D’Antoni said.

It’s possible both Steve Nash and Steve Blake play as early as Tuesday depending on how their respective back and right elbow feel during practices on Saturday, Sunday and Monday. But Farmar’s situation appears a bit dicier because of the nature of his torn left hamstring. He also suffered another hamstring injury that kept him sidelined for 10 games. Farmar lasted only four more games before tearing his hamstring in a different area.

“I’ll try to be patient and listen to my body,” said Farmar, who has averaged 8.7 points and 4.7 assists. “If I feel anything, I’ll communicate with the staff and let them know. But at the end of the day, I can’t be afraid to play. If I am healthy, I have to be out there. I’m really taking it slow and paying attention to every little detail. If I come back and feel something, I’m won’t be afraid to say something and make sure I stay on top of it.” 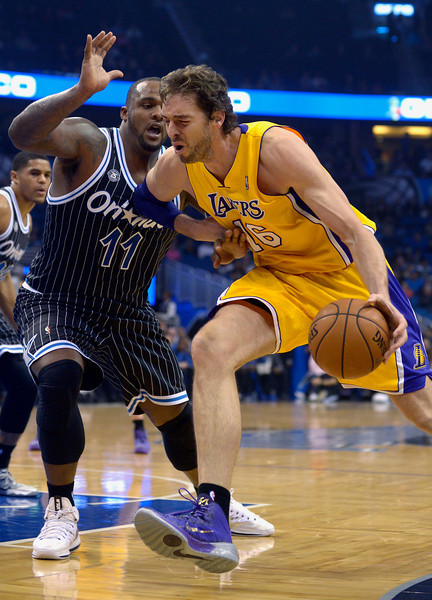 Though a groin injury in recent weeks has worsened enough to keep him active in only part of Fridays’ shootaround, Pau Gasol is expected to play when the Lakers (16-30) host the Charlotte Bobcats (20-27) Friday at Staples Center.

Lakers coach Mike D’Antoni disclosed Gasol is wearing a “device” on his the big toe of his left foot after suffering a moderate strain in that area two weeks ago.

“His toe was causing him to run wrong and he felt it in the groin,” D’Antoni said. “Whatever it is, he should be all right tonight.”

Gasol didn’t speak to reporters on Friday, but he said following Thursday’s practice that the toe injury contributed to the groin injury because he felt forced to compensate.

D’Antoni also said Lakers guard Jodie Meeks will play tonight against Charlotte despite nursing a sore right foot. Meeks has averaged a career-high 14.6 points on 45.4 percent shooting this season because of improved outside shooting, defensive hustle and finishing.

“Jodie has played really well. He’s improved his game and has become a really good basketball player,” D’Antoni said. “He still has to add on his pen court layups. He has to work on that. But he’s become a consistent shooter, consistent defender and a guy who doesn’t make too many mistakes.”

Still, it didn’t help that Gasol suffered inconsistency this season.

“I think he was hurt a little bit,” D’Antoni said. “We had some issues with point guards and issues he had to work through. That’s just the way it went.”

Lakers have no representatives in All-Star weekend

Magic Johnson backtracked, pivoted and handed off an assist.

This doesn’t dazzle as much as his signature passes during the “Showtime Era”. But it still could cause one to shake their head in surprise. Magic Johnson has criticized the Lakers for everything imaginable. Their poor defense. The Lakers’ decision to hire Mike D’Antoni last season over Phil Jackson. The direction executive vice president of basketball personnel Jim Buss has taken this franchise. The losing, too.

But Johnson has vowed he won’t do that anymore.

Laker Nation: I'm going to stop complaining. I'm going to support and encourage Jim Buss and Coach D'Antoni because I love the Lakers!

END_OF_DOCUMENT_TOKEN_TO_BE_REPLACED

Phil Jackson wondered aloud the logic behind the Lakers’ front office making a move, and this time it didn’t involve him lamenting getting pass over in favor of Mike D’Antoni last season to coach.

Instead, Jackson questioned why the Lakers would sign Kobe Bryant to a two-year, $48.5 million extension considering how that compromises the team’s cap space under a harsher labor deal.

“They paid him more than I would have gone for,” Jackson said in an interview on NBA TV that aired on Thursday.

But Jackson, who won five of his 11 NBA championships with Bryant, still understood the value he brings despite playing only six games first because of a torn left Achilles tendon and later because of a fractured left knee.

“What he’s given to this organization, what he gives back, he brings a certain sense of, ‘We’re going to win!’ ” Jackson said. “You got to have a guy on the team that doesn’t settle for second. That’s one of the areas where the value of Kobe, even at this age, is terrific.”

END_OF_DOCUMENT_TOKEN_TO_BE_REPLACED 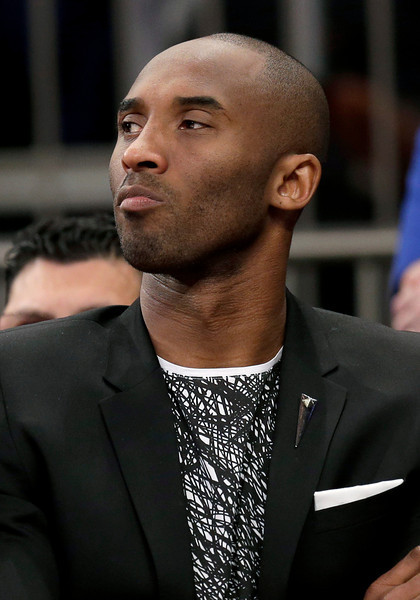 After showcasing plenty of star power in their storied history, the Lakers have mostly fielded a roster of nameless players.

Couple that reality with the Lakers’ persistent losing, and they won’t feature any players in the NBA All-Star game for the first time since the 1995-96 season.

Kobe Bryant was voted to start in what would’ve become his 15th All-Star appearance despite appearing in only six games because of a injured left Achilles tendon and then a fractured left knee. But with Bryant expected to be sidelined for at least three more weeks, Bryant isn’t healthy enough even to make a token appearance.
END_OF_DOCUMENT_TOKEN_TO_BE_REPLACED 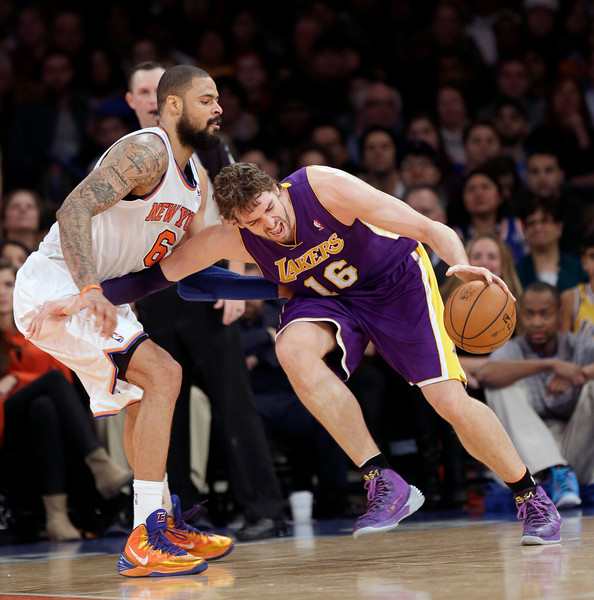 In what’s become a persisting theme for this disappointing season, the Lakers’ flurry of point guards returning to practice coincided with one of their key players staying sidelined.

Pau Gasol missed Thursday’s practice and remained confined to individual drills after a groin injury worsened in the Lakers’ loss Tuesday to the Indiana Pacers. Although the Lakers (16-30) consider Gasol probable for tomorrow’s game against the Charlotte Bobcats (20-27) at Staples Center, the Lakers forward sounded as if this injury could affect his play.

“I’m still not healed. Because of the tape job I play with to protect the toe, it’s affecting my groin,” Gasol said. “I’m going to try to continue to heal the day and make it feel better and improve.”
END_OF_DOCUMENT_TOKEN_TO_BE_REPLACED

After nursing most of the season without any traditional point guards, the Lakers suddenly have plenty of them.

Both Steve Nash, Steve Blake and Jordan Farmar participated in Thursday’s practice, giving the team a sudden jolt of hope in an otherwise disastrous season. Neither players will play when the Lakers (16-30) host the Charlotte Bobcats (20-27) Friday at Staples Center. But Nash sounded the most optimistic that he could play in the Lakers’ three-game trip next week with stops in Minnesota (Tuesday), Cleveland (Wednesday) and Philadelphia (Friday) after missing 40 games because of persistent nerve issues in his back and hamstrings.

“Tomorrow is definitely out. Next week I have extremely high hopes to play,” said Nash, who has averaged 6.7 points and 4.8 assists in only six games. “A couple of more days of practice, I have to take it day by day. A month or so I was here and felt really good and two days later for whatever reasons the nerve was pretty fired up again. I take it day by day. The fact I got through practice is a positive.”

Blake, who hasn’t played since Dec. 10 because of a hyperextended right elbow, no longer wears a brace. But he wore two bags of ice around his right arm and suggested he will have to rehab it.

“I still have pain in the back of my elbow when I shoot but I’m able to deal with it,” said Blake, who has averaged 9.8 points and 7.7 assists. “I hope it continues to heal. But it was fun. For me personally, it felt great.”

Farmar also sounded cautious after sitting out since Dec. 31 because of a torn left hamstring.

“I’ve been mentally frustrated and bored the last few weeks. But just to get back out thee and make some progress felt good,” said Farmar, who has averaged 8.7 points and 4.7 assists. “I’m not playing tomorrow. So our next game is on the road and we have four or five days in between that. Let’s make progress every day and see how it feels.”

Kendall Marshall has done a good job at point guard since the Lakers signed him out of the D-League in December. He’s averaging 10.5 points and 9.3 assists in 17 games – 13 as the starter.

But with the news Monday that three other point guards – Steve Nash, Steve Blake and Jordan Farmar – are close to returning from their respective injuries, one has to wonder what will happen to Marshall when they do.

Marshall on Monday insisted he is not thinking about it.

“Not at all, not at all,” he said after practice. “The only thing I’m focused on is the next game and trying to win that game. There are way too many variables in this league to try to
predict the future, so I just try to take it one day at a time.”

Marshall and the rest of the Lakers tonight play host to the Indiana Pacers, who at 34-9 have the league’s best record.