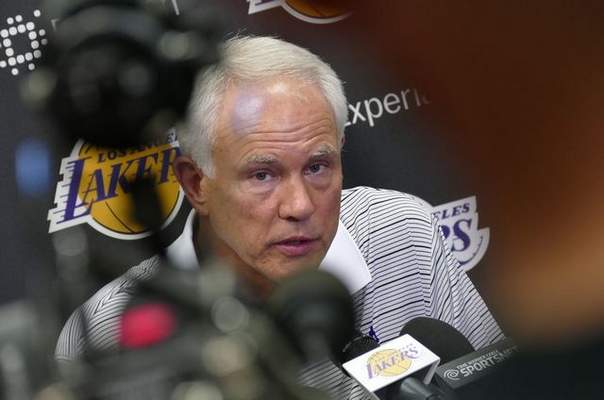 The soda stayed firmly in Mitch Kupchak’s hand. The Lakers’ general manager soon joked he had actually been nursing his third Rum and Coke.

Did it reflect Kupchak’s sorrow over Kobe Bryant’s announcement on Sunday that he would retire following the 2015-16 season? Or did it convery Kupchak’s celebration on having clarity on Bryant’s ending? The answer is neither. Kupchak obviously wasn’t drinking. The Lakers’ general manager also offered pragmatism on the implications on Bryant retiring after the final year of his contract worth $25 million ends.

Bryant had partly fueled that speculation both because of his star power and his insistence to leave his future open-ended. After playing only 35 games last season before needing surgery on his right shoulder, Bryant had publicly said he leaned toward retiring once his contract ended. But he said he “probably” would not know about his future until the 2015-16 season ended.

With Bryant formalizing his decision sooner than expected, Kupchak reflected on the development in two ways.

Kupchak also acknowledged the Lakers have more clarity on the team’s future. With Bryant’s contract coming off the books, the Lakers will have enough money to sign two marquee free agents to max contracts.

“It’s difficult to predict the future,” Kupchak said. “But now that we don’t have to deal with speculation and try to predict what may or may not happen with the remainder of the year, we know with certainty what our cap situation will be.”
END_OF_DOCUMENT_TOKEN_TO_BE_REPLACED 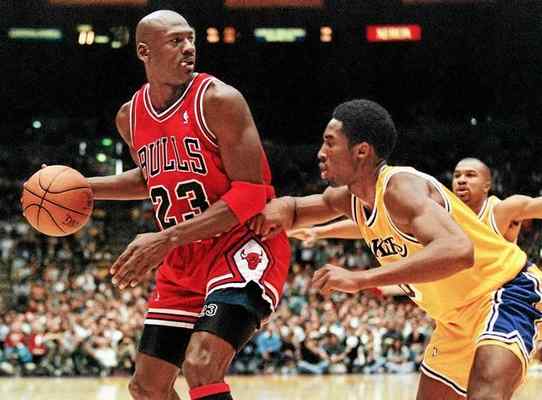 The man became Kobe Bryant’s idol as he developed his game and set a measuring stick on his NBA legacy. But Michael Jordan also became one of the first people Bryant informed last summer that he planned to retire following the 2015-16 season.

“The important thing from him was just enjoy it,” Bryant said following the Lakers’ 107-103 loss to the Indiana Pacers on Sunday at Staples Center. “No matter what, just enjoy it. Dob’t let anybody take that away from you. No matter what happens, good or bad. Enjoy it.”

The man became Bryant’s coach, teacher and mentor even as he initially became frustrated with his motivational tactics and basketball philosophies. But New York Knicks president and former Lakers coach Phil Jackson became a key figure in assuaging Bryant’s frustration amid a trying season.

“He said to break the season up into sections,” said Bryant, who has averaged 15.5 points on a career-low 30.5 percent shooting through the Lakers’ last-place start in the Western Conference (2-14). “Take it one chunk at a time. Just try to get through it.”
END_OF_DOCUMENT_TOKEN_TO_BE_REPLACED

The news left Lakers coach Byron Scott feeling “sad” as Kobe Bryant informed him at some point on Saturday night that he planned to retire following the 2015-16 NBA season. But even if Scott nursed those feelings leading into Sunday’s game against the Indiana Pacers at Staples Center, Scott noticed that Bryant appeared “at peace” with his decision.

“It was so matter of fact,” Scott recalled in a press conference on Sunday evening. “After I thought about it, I felt better about that. It wasn’t like he was agonizing over anything.”

Bryant formally announced his plans in an article for The Players’ Tribune website that was published Sunday afternoon.

“You gave a six-year-old boy his Laker dream, and I’ll always love you for it,” Bryant wrote in the article. “But I can’t love you obsessively for much longer. This season is all I have left to give. My heart can take the pounding. My mind can handle the grind. But my body knows it’s time to say goodbye.”
END_OF_DOCUMENT_TOKEN_TO_BE_REPLACED

Although he initially wanted to stay open-ended about his future, Lakers guard Kobe Bryant has decided he will retire following the 2015-16 season.

“This season is all I have left to give.” Bryant wrote in a Players Tribune article.

The Lakers had expected Bryant would retire following his 20th NBA season. Ever since he had season-ending right shoulder surgery last season after playing only 35 games, Bryant had expected he would not play past his current contract beyond $25 million. But Bryant had left the option open in case he changed his mind.

That appears no longer the case. Bryant has averaged 15.7 points on a career-low 31.5 percent shooting. The Lakers (2-13) are also off to their worst-start in franchise history.

“This season is all I have left to give,” Bryant wrote. “My heart can take the pounding. My mind can handle the grind. But my body knows it’s time to say goodbye.”
END_OF_DOCUMENT_TOKEN_TO_BE_REPLACED 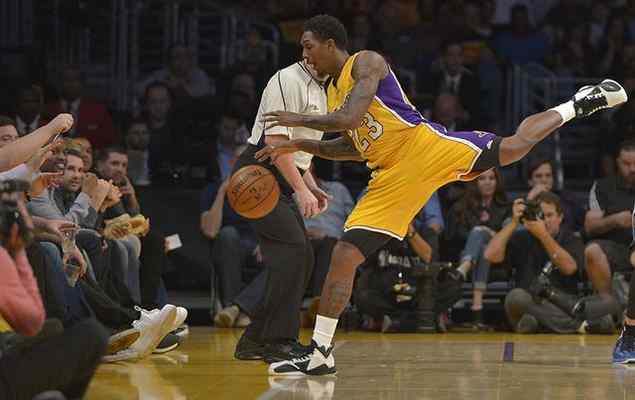 Lakers guard Louis Williams dives out of bounds for a ball against Minnesota in the opening game of the 2015-16 NBA season. (John McCoy/Los Angeles News Group)

PORTLAND, Ore. — The Lakers granted reserve guard Lou Williams a leave of absence after his grandfather recently passed. Williams did not travel with the team for Saturday’s game in Portland and does not plan to play in Sunday’s game against Indiana at Staples Center.

The Lakers expect that Williams will rejoin the team on Monday in Philadelphia before starting an 8-game, 13-day trip.

“We’re all thinking about Lou at this particular time,” Lakers coach Byron Scott said. “We all know that he and his grandfather was very close.”

The Lakers signed the 29-year-old Williams to a three-year deal worth $21 million this past summer. Williams has averaged 12.3 points albeit on 35.1 percent shooting in 24.9 minutes per game off the bench. Yet, Scott attributed some of those struggles on himself by playing him at point guard instead of shooting guard. Scott switched Williams’ role to the off-guard position for the past two games.

“He was trying his very best to play that point guard role. But that’s not him,” Scott said of Williams. “It’s just trying to get him back and be more comfortable in the offense and system. Putting him back to the 2-guard, he’s free and catch-and-shoot and make plays instead of making plays for others. We’ll see how it works out in the end.”

PORTLAND, Ore. — The Lakers have not even completed a month of the 2015-16 season, but both an uncomfortable and familiar question has already emerged.

With the Lakers (2-12) entering Saturday’s game against the Portland Trail Blazers (6-10) at Moda Center with the NBA’s second-worst record, how much effort will the franchise put in retaining its top-3 protected draft pick?

“I don’t think about that whatsoever,” Lakers coach Byron Scott said following Saturday’s morning shootaround. “I probably won’t until April. That’s something I can’t control and that’s at the end of the season.”

The Lakers are in a precarious position. They appear likely bad enough to lose a lot of games. But will they be bad enough to land in the top three? Otherwise, the Lakers owe Philadelphia their first-round pick as part of the Steve Nash trade. The Lakers finished last season with the NBA’s fourth-worst record, but moved up two slots for the No. 2 pick. The Lakers eventually chose point guard D’Angelo Russell with that pick.

“It’s impossible to think about the team, try to get our young guys better, the team better and also thinking about a pick,” Scott said. “That’s six months away and you might not even get it. I don’t concern myself with things that aren’t in my control.”

END_OF_DOCUMENT_TOKEN_TO_BE_REPLACED

“Guys sometimes want the ball in their hands and they don’t trust making passes to other guys. We have to get to the point where the ball doesn’t stick and we find open guys,” Scott said. “When you have young guys that are so used to having the ball, getting rid of it is sometimes an issue. That’s what we’re trying to break.”
END_OF_DOCUMENT_TOKEN_TO_BE_REPLACED

Well before Kobe Bryant stepped on the court in his 20th and likely last NBA season, it appeared obvious the Lakers’ slate of 18 back-to-back games would represent a major factor in his workload.

But Lakers coach Byron Scott conceded uncertainty how will handle Bryant’s playing time when the Lakers (2-12) play the Portland Trail Blazers (6-10) on Saturday at Moda Center before hosting the Indiana Pacers (9-5) on Sunday at Staples Center.

“Tomorrow we’ll play him,” Scott said following Friday’s practice at the Lakers’ facility in El Segundo. “Then we’ll see how he looks for Sunday.”
END_OF_DOCUMENT_TOKEN_TO_BE_REPLACED 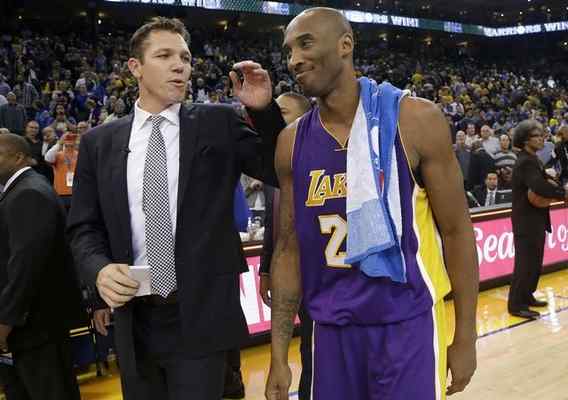 Yet, Lakers coach Byron Scott maintained that he has not considering adjusting Bryant’s role or his minutes in hopes to jumpstart both the Lakers (2-11) and Bryant’s play.

END_OF_DOCUMENT_TOKEN_TO_BE_REPLACED 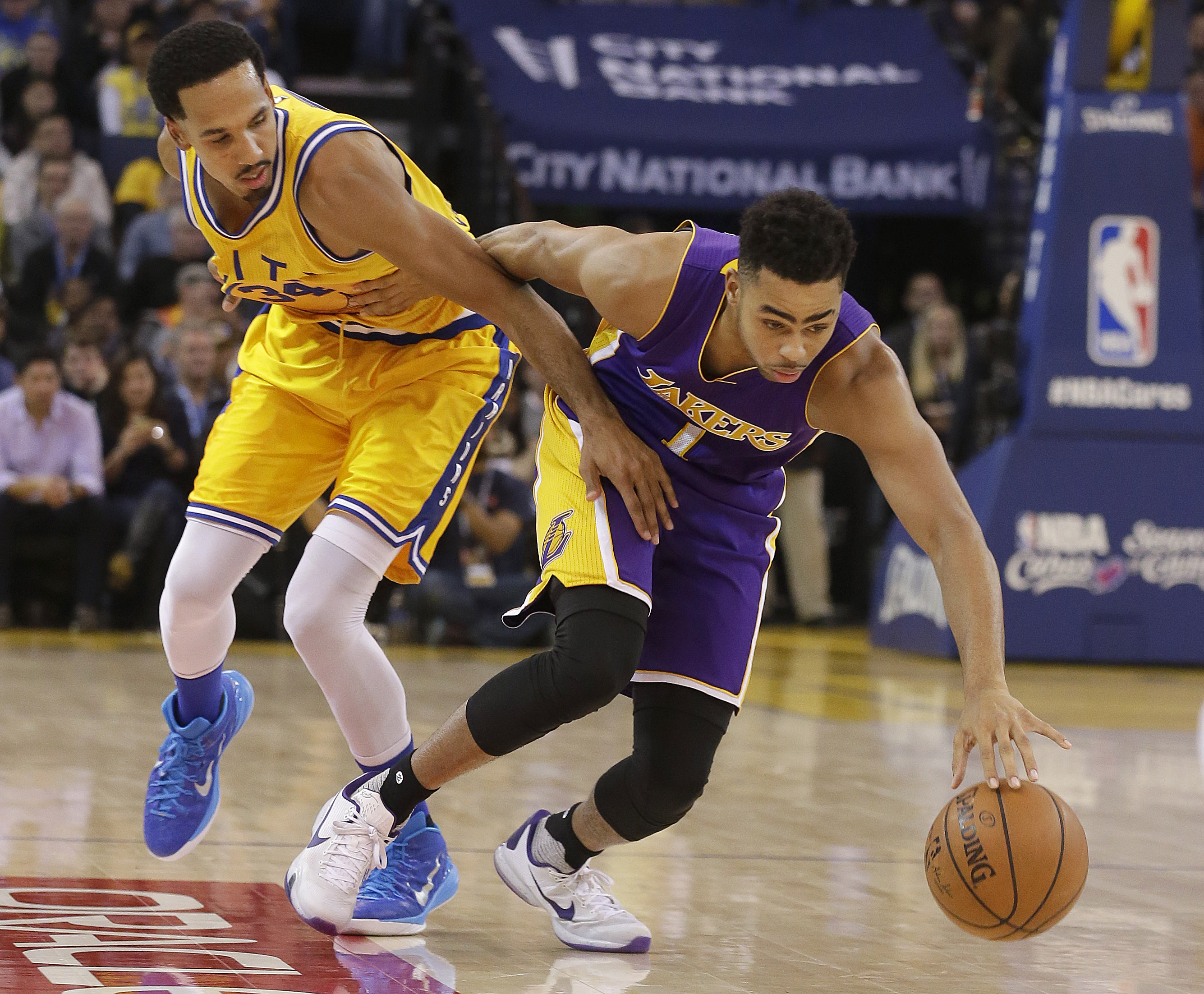 “That would be great,” Russell told Los Angeles News Group. “You’re only a rookie once. You get reps now and mess up now. So then next year when you’re not a rookie, you don’t have to worry about making rookie mistakes.”
END_OF_DOCUMENT_TOKEN_TO_BE_REPLACED