After making several changes to various behind-the-scenes positions this offseason, the Lakers have started hiring new members to their organization.

As part of efforts from Lakers controlling owner Jeanie Buss, president of basketball operations Magic Johnson and general manager Rob Pelinka to restructure their staff, the Lakers named Gunnar Peterson as the team’s Director of Strength and Endurance Training.

Peterson had served as a personal trainer in Beverly Hills for the past 28 years for various athletes in the NBA, NHL, NFL, MLB, USTA, boxing and various NCAA tournaments as well as entertainers. According to Peterson’s website, he has also trained reality television stars Khloe and Kim Kardashian.

“From his time in college at Duke University until now, Gunnar has pursued excellence in training and fitness,” Pelinka said in a statement. “Gunnar is a true pioneer and visionary at his craft, and will bring a new mentality to our weight room which we are all very excited about. Since Magic and I have worked with Gunnar in the past, we have a strong relationship with him, which makes working together now feel seamless.”

The Lakers said that Peterson “will design and implement a strength and conditioning program for the team with the goal of keeping the players performing at elite levels throughout the NBA season.”

Lonzo Ball has sparked attention for his play. He has garnered rave reviews about his passing, scoring and leadership qualities during his lone season at UCLA.

LaVar Ball has sparked attention for his self-promotion. He has launched the Big Baller Brand shoes that cost $495 a pair, has claimed he can beat Michael Jordan one-on-one and has gushed about his son’s greatness.

LaVar Ball also has maintained it’s a foregone conclusion his son will wear a purple and gold uniform. Yet, Lakers coach Luke Walton said the team will conduct more research before making its final decision for the NBA Draft on June 22. That includes the Lakers asking UCLA coach Steve Alford about LaVar Ball.

“I wouldn’t personally. But yes, somebody in our organization will,” Walton said Friday on “The Dan Patrick Show. “Absolutely.”

Walton chalked up those inquiries as part of the Lakers’ due diligence the Lakers on every prospect. So while Walton has scoured clips the scouting department has put together on each candidate for the Lakers’ No. 2 and No. 28 picks, Walton said the Lakers plan to contact every school about how each player treated people behind the scenes and how they took care of their body in the trainer’s room.

Lakers president of basketball operations Magic Johnson and general manager Rob Pelinka have generally downplayed whether LaVar Ball’s outspokenness could deter them from selecting Lonzo Ball. Instead, they have stressed they will evaluate Lonzo Ball more on his past performances, pre-draft workouts and interviews. But does LaVar Ball worry Walton?

“Not yet. When we get closer to the draft, I;m sure we’ll get a packet of information on every player we’re interested in,” Walton said. “We’ll sit down and discuss it all. But right now, I’m not concerned at all. I’m mostly concerned with which player can help us win more than 26 games the most.”

END_OF_DOCUMENT_TOKEN_TO_BE_REPLACED

Mark Medina, the Lakers beat writer for Southern California News Group, breaks down the NBA Draft Lottery where the Lakers landed the #2 overall pick. Does this mean the team goes with Lonzo Ball? You’ll hear from Lakers upper management, including Magic Johnson and Rob Pelinka.

The Lakers’ wave of sea changes in their basketball operations department included Rudy Tomjanovich, who coached the Lakers 43 games into the 2004-05 season before abruptly resigning and serving as a consultant for the Lakers in various capacities in subsequent years.

A Lakers spokesperson attributed Tomjanovich’s departure to “part of the reorganization of basketball operations,” which took place shortly after the 2016-17 season ended in mid-April. Last season, Tomjanovich served as a consultant and scout for the Lakers’ basketball analytics department. Tomjanovich’s son, Trey, also is not part of the staff after serving as a consultant and helping with statistical analysis in the basketball analytics department.

Tomjanovich had been previously linked to a dark part of the Lakers’ history. Tomjanovich, who played with the Rockets from 1971 to 1981, suffered a vicious punch from former Lakers forward Kermit Washington during an on-court scuffle at the Forum. Tomjanovich suffered compound facial fractures and retired in 1981.

The Lakers have not been the most exciting team to watch over the past few seasons, with reasons to tune in few and far between for even the most die-hard Laker fan. One man who has seen every minute of the Lakers and their precipitous drop from the top of the NBA is Spectrum SportsNet’s Chris McGee.

McGee joins Mark Medina, the Lakers beat writer of the Southern California News Group on the “We Want Tacos” Lakers podcast to express his optimism surrounding the Lakers’ chances in keeping their top-three protected pick in the NBA draft lottery on May 16. McGee also has insight on hosting shows on draft lottery night and insight on Lakers head coach Luke Walton.

Lakers scout Chaz Osborne no longer works with the team, with what a Lakers spokesperson said is “part of the reorganization of basketball operations.” The Lakers parted ways with Osborne earlier last month shortly after the 2016-17 season ended. Osborne was known to be close with former Lakers executive vice president of basketball operations Jim Buss, who was fired on February by his sister, Lakers governor Jeanie Buss.

After replacing her brother with Magic Johnson as the president of basketball operations, Jeanie Buss then hired Rob Pelinka as in place of longtime general manager Mitch Kupchak. Since their hiring, Johnson and Pelinka have said they would evaluate everyone working with the Lakers franchise.

The tension between Kobe Bryant and Shauqille O’Neal once stemmed over personality differences, work habits and control over the Lakers franchise. Though both sides say they have reconciled those issues, O’Neal and Bryant both brought a comedic twist between a duo that dominated on the court and fought off of it.

In a trailer for the NBA 2K18 Legend Edition that will be released on Sept. 19,, O’Neal stands behind a lectern and thanks various unnamed coaches and teammates for helping him get on the cover of the popular video game. O’Neal then expressed gratitude to Bryant for reasons that had nothing to do with his skills.

“He was an NBA 2K Legend cover athlete first,” O’Neal said of Bryant. “He’s so awesome and handsome and has really nice natural teeth.”

O’Neal then expresses confusion as he read the telemprompter. He then realized Bryant wrote those words for him. O’Neal vowed that “payback is going to be fun,” bringing new life to a beef they insist no longer exists.

Shaquille O’Neal: ‘It means a lot’ Kobe Bryant spoke at his statue unveiling 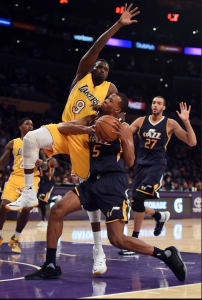 The injury bothered Deng at times during the 2016-17 season where he posted career-lows in points (7.6) and shooting percentage (38.7) in his 12th NBA season. Though the Lakers sounded confident about Deng’s future health, his future as a player remains uncertain. The Lakers may try to trade Deng, who has three years left worth $54 million left on his contract. But the size of that contract also presents various challenges in unloading it.

Shortly before the season ended, Deng said he planned to spend most of his offseason training. He also said he talked with Lakers coach Luke Walton more about playing at the power forward position, something Deng said also matched Walton’s view. It remains unclear if that will happen considering the Lakers have frontcourt players in Julius Randle and Larry Nance Jr. Forward Thomas Robinson will also be an unrestricted free agent, while forward Tarik Black has a non-guaranteed contract with the Lakers for next season worth $6.65 million.

Jackson’s departure represents the latest wave of changes since Lakers president of basketball operations Magic Johnson and general manager Rob Pelinka took over the front office in February. Since their hiring, Johnson and Pelinka said they would evaluate everyone working with the Lakers’ franchise.

Lakers assistant general manager Glenn Carraro had resigned from his position in early April after working with previous general manager Mitch Kupchak since 2000. Lakers strength and conditioning coach Tim DiFrancesco resigned on Tuesday. And the Lakers assistant strength and conditioning coach Sean Light is no longer with the team, which a Lakers spokesperson also attributed to a “part of the reorganization of basketball operations.”

As for Jackson, he had spent the past 10 years with the Lakers and completed his second year as the team’s director of player development. He had assisted Kupchak in day-to-day operations focusing on players’ personal growth and providing resources that develop life skills. Jackson also had served on the NBA’s Steering Committee for player development, and won the Dana Davis Award for best player development work in the NBA for the 2015-16 season.

Before his time with the Lakers, Jackson worked with the Los Angeles Sparks of the NBA in various capacities. That included as the team’s coordinator for the coaching staff (2000), the Sparks’ Assistant General Manager (2001, 2002). Jackson also helped with local team try-outs, regional and local scouting, player development, community relations appearances and team operations assistance.

Jackson, who grew up in Oakland, also was an assistant coach for the women’s basketball teams at Cal State Fullerton (1996-97) and Loyola Marymount (1997-2000).

There may be no more interesting figure in American sports over the last two decades than Kobe Bryant, both for his incredible play on the court and his philosophical nature away from it. Mark Medina of the Southern California News Group talks about the Los Angeles icon with his biographer, author Roland Lazenby.

Lazenby shares his thoughts on Bryant, as well as some interesting anecdotes from his book, “Showboat: The Life of Kobe Bryant.” Lazenby also provides insight on how he sees Kobe’s life after basketball playing out, with audio from Bryant himself.