It turns out the Lakers wanted more than the last word.

The Lakers may have received assurances from Howard that they will be the last team he meets as he explores the free agent market. But Lakers general manager Mitch Kupchak still briefly met with center Dwight Howard shortly after free agency began at 9 p.m. on Sunday, according to a league source familiar with the discussions.

“It went well,” the source said.

The Lakers still plan to meet with Howard on Tuesday in what will be a more formal discussion on why he should resign with the team to a five-year, $118 million deal, as opposed to a four-year, $87.6 million deal with any other team.

Howard plans to meet with the Atlanta Hawks and Golden State Warriors on Monday and the Dallas Mavericks and the Lakers on Tuesday, according to league sources.

It’s still considered a longshot for that to happen. Budinger can likely to make more than the $3.2 million the Lakers can offer him via the mini mid-level exception. Yahoo! Sports reported several other teams are interested in Budinger, including the Timberwolves, Milwaukee Bucks and New Orleans Pelicans.

The Lakers are in dire need of consistent outside shooting, youth and athleticism. Budinger, 25, fits that mold, averaging a career 9.4 points. He played his first three seasons with the Houston Rockets before being traded to the Timberwolves for the 2012-13 season. After suffering a knee injury six games into the season, Budinger rehabbed and returned to Minnesota’s lineup in late March.

Kobe Bryant reiterates hopes for Dwight Howard to stay, but won’t push him

Believe it or not, the Lakers have plenty of things to tackle in this free agency period beyond convincing Dwight Howard to stay.

The Lakers also expressed interest in resigning surprise reserve Earl Clark shortly after the free agency period began at 9 p.m. PST on Sunday night, a conversation Clark’s agent said “went well” and that they plan to resume talks on Monday. Still, the Lakers’ interest in Clark will hinge on what he attracts in the open market.

Clark, who made $1.2 million last season, received interest in “two or three teams,” including the Lakers, said Bradbury. He said he hasn’t determined yet whether he’s seeking a multi-year deal or a one-year deal since it depends on what offers he receives. But the Lakers wouldn’t want to go beyond one year since they want to maximize cap flexibility for the 2014 offseason when a flurry of high-priced players will become free agents, including LeBron James, Carmelo Anthony, John Wall and Paul George, among others.

“Just a chance to be somewhere with a team where his minutes will come from and he can play and be a part of something,” Bradbury said. “He wants to take that next in his career.”

After he took a paycut to play one season for the veteran’s minimum in hopes of winning his first NBA championship, it’s unlikely Antawn Jamison will return to the Lakers.

He will become an unrestricted free agent at 9:00 p.m. tonight with a much different mindset than he had last season. Although he hasn’t held regrets playing with the Lakers for $1.4 million as opposed to the Charlotte Bobcats in what would’ve been a three-year, $10 million deal, Jamison isn’t intent on duplicating that process for various reasons.
END_OF_DOCUMENT_TOKEN_TO_BE_REPLACED

There once marked a time when Kobe Bryant doubted he wanted to stay with the Lakers.

It happened once when he explored the free agent market in 2004 shortly after the lakers traded Shaquille O’Neal, fired coach Phil Jackson and saw a flurry of role players flee. Those sentiments emerged again in 2007 when Bryant demanded a trade and openly questioned the organization’s financial commitment into building a championship roster. Both times, the late Lakers owner Jerry Buss assuaged Bryant’s concerns. So as Dwight Howard begins the free agency process where he wonders if the Lakers are the fit for him, Bryant understands the conflicting feelings he might have.

“It has to be his decision,” Bryant said in a sitdown interview with Lakers.com’s Mike Trudell. “The last thing you want to do is convince a person that they want to be here. If you have to convince them when challenges or adversity comes up next season, it’s very easy to say, ‘Well they had to convince me to be here anyway, I really didn’t want to be here, I’d rather be (somewhere else) but they sold me on it.’ You want it to be his decision. When it’s something that’s rooted inside of him, it’s something he champions. I just want to be there to assist his decision.”
END_OF_DOCUMENT_TOKEN_TO_BE_REPLACED

Amid all the teams about to clamor for his services, there remains one defining factor that those close to Dwight Howard say will determine who he will play for next season.

“Dwight is truly, in my opinion, going to make his decision where he has the best chance at winning an NBA title,” said a source familiar with Howard’s thought process.

That decision begins tonight at 9 p.m. when he becomes an unrestricted free agent. A minute later, the Lakers plan to call Howard to reiterate their hope that Howard resigns with the Lakers to a five-year deal worth $118 million, as opposed to a four-year deal worth $87.6 million. 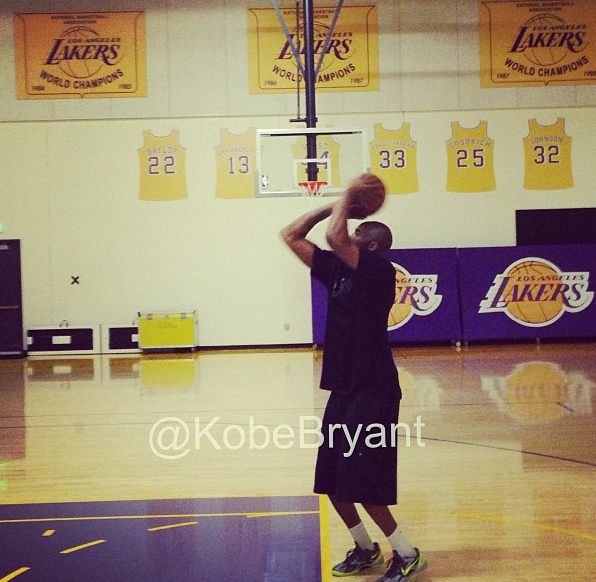 Kobe Bryant posted a picture on his Instragram account, shooting a free throw Sunday at the Lakers’ practice facility in El Segundo.

The last time he stepped to the free throw line, Kobe Bryant hobbled on one foot. Unknown to some of the Lakers fans chanting “M-V-P,” Bryant just suffered a torn left Achilles tendon. Instead of getting carted off the floor, however, Bryant went to the line, nailed two free throws and then limped off the court to a standing ovation.

Just over two months later, Bryant’s back at the line. He posted a picture on Instagram where he began the shooting portion of his rehabilitation process on Sunday at the Lakers’ practice facility in El Segundo. And according to Lakers strength and conditioning coach Tim DiFrancesco, the results are what you’d expect from the Black Mamba.

@kobebryant drained a free throw after another monster a.m. workout! Check his instagram 4 proof! #Kobe #LakersWorkMamba ps It was all net!

Bryant has estimated in recent weeks he will return fully healthy by November or December, making it possible he would miss the first month of the 2012-13 season, if not more. There are fair questions on to what degree Bryant will adjust his game to remain effective enough when he displayed superior athleticism and conditioning last season. But throughout this process, Bryant has made linear progress. And on Sunday, Bryant reached a benchmark significant both for his rehab and the symbolism behind his injury.

The Lakers waived backup point guard Chris Duhon, who will receive $1.5 million of the $3.75 million he would have earned this upcoming season had he stayed under contract.

The move saved the Lakers about $2.50 million in salary and up to $9 million in luxury taxes.

Duhon was nothing more than a throw-in in a deal last summer that brought Dwight Howard to the Lakers from the Orlando Magic. Duhon wasn’t expected to play a significant role behind Steve Nash and Steve Blake.

But long-term injuries to Nash (fractured left leg) and Blake (lower abdominal strain) propelled Duhon into the rotation. He averaged 2.9 points on 36.8 percent shooting and 2.9 assists in 46 appearances, including nine starts.

Amid all the uncertainty surrounding his future, Dwight Howard’s still having fun.

It’s the trait his admirers love and his critics hate, but that’s what makes him Howard. So as he spent part of Friday rehabbing at UCLA, he gathered up a group of kids to play a few games of knockout and posted some of the footage on his Instagram account.

The video doesn’t show who won. But it at least reveals that Howard is stay in L.A.. At least for now.

Once the Lakers were on the clock, Mitch Kupchak felt a sense of uneasiness for reasons beyond Dwight Howard’s uncertain future or the fact the team only had the 48th pick in the NBA Draft.

The board the Lakers’ front office constructed tabbed Duke forward Ryan Kelly as the most talented prospect available, meaning Kupchak would have to compromise his North Carolina roots and choose an arch-rival down Tobacco Road for the sake of improving the Lakers.

“It was dramatic,” Kupchak said. “It was traumatic as well.”

Kelly wouldn’t go that far. He offered a hearty laugh through a telephone speakerphone during a conference call with Los Angeles-based reporters.

“He must like me a lot if he’s willing to draft a Duke guy,” Kelly said. “That excites me a little bit.”
END_OF_DOCUMENT_TOKEN_TO_BE_REPLACED