Arcadia police released a photo Wednesday of a man suspected of participating in a bank robbery that netted $3,600.

The robbery, which occurred about 4:30 p.m. Tuesday occurred in the HSBC Bank at 1107 S. Baldwin Avenue.

We’re still in the process of moving to a new server, so posts are slow appearing.

As we move forward, I plan on revamping parts of the site including the links. So,

If you have a site you think Crime Scene should link to, post it up in the comments below.

I look forward to hearing from you.

This comes from our sister paper in Northern California, the San Jose Mercury. I’m posting a link here because there is a Duarte connection as you will see in the snippet below:

They were the gang that shot straight but could not do much else. The killers of Mark Achilli pumped seven slugs into his body, truly finishing the popular Los Gatos man’s life. But in the police affidavit that was released on Friday, the accused killers emerged as the ultimate bumblers: Guys who badly mixed technology with an old-fashioned crime conspiracy.

Two blocks from the scene of the March 14 shooting, police found two items that were key to solving the case: an AOL-generated map showing directions from an unlisted address in Duarte, Calif., to Achilli’s town house on Overlook Road, and also a crumpled photo of Achilli downloaded from Metroactive.com.

The find was almost as good as fingerprints. It allowed detectives to put pressure on the man believed to be the pivot of the conspiracy, bar bouncer Daniel Chaidez. When Chaidez lied to the cops, it got sweeter.

Did anyone in this gang ever watch “The Sopranos”? Did any of them see Tony Soprano hunched over a computer, printing out directions to the home of his next victim? Fuggedaboudit. It just wouldn’t happen.

This from reporter Janette Williams:

Ricky Whitman, spokeswoman for the Pasadena Humane Society, said the
organization us still caring for about three dozen cats and dogs
brought in by owners who had to evacuate over the past few days.

“(Sunday) we evacuated the mules by trailer” from the Adams pack
Station at Chantry Flat, Whitman said. “We were able to help that way,
and the race track stepped up and helped.”

She said there were 20 mules, one mare and 15 goats all being looked
after by staff at Santa Anita Park racetrack.

Whitman said the pets brought in during the evacuation are being held
separately — including in the board room and auditorium — and will be
ready to leave when their owners come for them.

Reporter Amanda Baumfeld will report tomorrow on a Craigslist scam in Covina that has some potential renters hopping mad.

Here’s the top of her story as it stands:

COVINA – Stevan Ortiz and his girlfriend planned to move into a three-bedroom home on Calera Avenue Thursday.

The couple – expecting their second child in June – gave notice at their apartment in Baldwin Park, bought a washer and dryer and even made plans to pick up a dog.

But Tuesday afternoon, Ortiz, 22, discovered he was among a group of people who have been victims of a real estate fraud.

“We made so many plans,” said Ortiz, who tried contacting the owner all weekend. “I had this in the back of my mind when I couldn’t get a hold of him.” 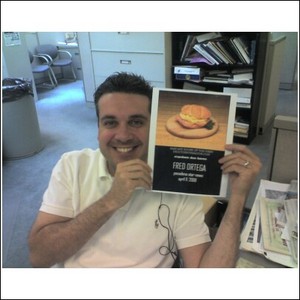 Fred’s award from Pasadena provocateur Proctor came in the mail today. I asked him to pose for a photo and the obligatory quote:

All he would say was “Um, yeah. That’s good.” (as he shoveled in another mouthful of huevos rancheros con jamon).

Brian Day reports on another shooting in the Valinda-La Puente corridor. Killed Monday morning was a 43-year-old man standing in a driveway in the 700 block of Foxworth Avenue.

LA PUENTE – Authorities had few leads Monday in the shooting death of a man in a residential neighborhood, authorities said.

Alex Trejo, 43, of Valinda was pronounced dead at the hospital after being shot numerous times, sheriff’s and coroner’s officials said.

Deputies responded to 9-1-1 calls reporting a gunshot victim just after 5 a.m. and found a 43-year-old man with multiple gunshot wounds in front of a house in the 700 block of Foxworth Avenue in an unincorporated county area near La Puente, said Los Angeles County sheriff’s Sgt. Gerard Velona.

The man was found lying in the driveway of a single-story home with numerous gunshot wounds from a handgun, Blagg said.

Here’s the latest version of my fire map. Incident commanders passed out a rough outline of the burn area at a press conference this morning at the Santa Fe Dam. I took the map and attempted to recreate the burn area as reported by officials.
View Larger Map

First off, a couple of links:

A personal observation from a guy who has a photo of an interesting street sign in Pico Rivera.

Wildfire Today with an update.

Things are rapidly returning to normal near the burn area. The buzz around the newsroom is that for all intents and purposes, the Santa Anita fire is over.

According to Janette Williams, NPR is reporting that residents are being allowed to return to their homes this morning.

The Foothill Cities Blog, which covered the blaze early and comprehensively, has gone back to including non-fire related posts.

The fire command post has moved east to Santa Fe Dam, even though the fire was reported moving west toward Pasadena. And, according to a press release from Pasadena CIty spokeswoman Ann Erdman there were voluntary evacuations on four streets near Hastings Ranch.

Some totals from the inciweb report:

The fire is currently 57% contained, with most of the containment in the area surrounding Sierra Madre residences and along the eastern edge of the burned area .

Fire information is available 24 hours/day by calling the Angeles National Forest Fire Information Center at 626-821-6700. The City of Sierra Madre Public Information can be reached at 626-355-7135.

I saw this tombstone at the Pioneer Cemetery in Sierra Madre Monday and it fascinated me.

Who are these people? What’s the story? Here’s the inscription:

Angel of my dreams