A press release from the DA’s office just moved:

PASADENA – A 29-year-old Saugus resident was charged today with raping two women and threatening them with a box cutter, the District Attorney’s office announced.

Jason Keith Renaux, (dob 10-31-79), is scheduled to be arraigned at 1:30 p.m. at Pasadena Superior Court, Dept. D. He is charged in case GA075499 with three counts of forcible rape and one count of forcible oral copulation with the special allegation he used a deadly weapon, a box cutter. He is being held on $1.4 million.

Renaux is charged with allegedly raping a 19-year-old woman on Dec. 27 after he picked her up on Colorado Boulevard at Kinneloa Avenue and drove her to the 3800 block of East Foothill Boulevard. The woman escaped and gave police the suspect’s license number. An investigation led police to a second victim, who said she was attacked in a similar way on Nov. 28.

If convicted, he faces up to life in prison.

This was in my morning notes from reporter Emma Gallegos. I’ll provide more information when it’s available:

just got off the phone with lt. dewar at pas, and he said that they will be putting out a release and photo today with the man accused of raping two women at knifepoint.

Here’s some of what Emma has learned:

*they don’t believe the victim from saturday knew the first — cns reported that they were friends but dewar said that wasn’t the case
*the victim from a month ago was sought out by police — she didn’t come forward on her own. she identified the same man and car independently of the second victim
*the suspect is an independent contractor — he may have had work that took him here
*neither of the women knew the suspect previously

Reporter Amanda Baumfeld, who has been covering the Christmas Eve Massacre since day one caught up with Sylvia Pardo’s best frend, a Pomona woman who shared her memories Monday. Here’s the top of the story:

Monday she remained unable to cope with the fact that Sylvia is gone. So, Jauregui continues to leave messages on a cell phone owned by Sylvia trying to hold onto their daily routine.

“I continue to talk to her as if she was still here,” Jauregui, of Pomona, said. “We would talk almost everyday after work; she would tell me her private issues…I know her inside and out. I still believe that she is going to call me.”

What kind of monster dresses as Santa Claus and shoots an 8-year- old girl in the face as she expectantly greets him at the front door on Christmas Eve?

What kind of monster systematically executes nine people with semiautomatic handguns, takes out a homemade flamethrower festooned with Christmas wrapping and burns a two-story house to the ground?

What kind of monster takes out a whole family gathered together to celebrate the birth of Jesus, the Prince of Peace?

What kind of monster rigs his rental car to explode with the hope that more victims will be added to the unfathomable death toll?

What kind of monster could be so enraged by a failed marriage and an acrimonious divorce that he could be driven to commit the most evil acts imaginable?

Those questions have been on my mind since Christmas Day. It was then we first learned that Bruce Pardo, 45, of Montrose killed nine members of the same family who had gathered at a Covina home on Knollcrest Drive.

An explosion from the blaze Pardo set off seared the Santa suit to his flesh. His getaway to Moline, Ill., or Davenport, Iowa, became unlikely.

Pardo, who spent months planning his attack, slipped past police responding to the horrific scene and made his way to a brother’s home in Sylmar.

The questions began to form in the minds of first responders who spent early Christmas morning grappling with the monster’s appetite for destruction.

But the monster did not stick around to answer the questions. The monster took the coward’s way out. He saved the last semi-automatic round for himself, completing the purchase of his one-way ticket to hell.

As a result, there is no accounting for the pure evil of the monster other than facts that could apply to anyone.

The monster lived among us.

The monster had a family.

The monster felt affection for his dog.

The monster worked as a software engineer.

The monster’s friends recalled him as quiet and unassuming.

The questions and the irrelevance of the answers loomed large on Knollcrest Drive on Monday morning — five days after the massacre that likely claimed the lives of Jose and Alicia Ortega, two of their sons, two of their daughters-in-law, two daughters and a grandson.

I went there hoping to learn something — anything.

I left there with a profound feeling of despair and sadness for a loving and close-knit family taken out by a selfish, soulless and sociopathic monster who turned a day of joy into something we will never understand or comprehend.

Leonard is reporting that Pardo planned to not only kill the Ortega family, but expected to find his own mother at that same Christmas party.

Additionally, Leonard is apparently reporting that Pardo’s second getaway car, was located close to the home of Scott Nord, the attorney who handled Sylvia Pardo’s divorce case. The workign theory is that Pardo plotted to kill Nord and his family before making a final getaway.

Brian’s working up a version of the story that we will release on line as soon as the details become clear.

Here’s a link to Leonard’s latest piece on the Christmas Eve massacre.

This from Glendale attorney Scott Nord, who is representing the surviving members of the Ortega family:

The events of Christmas Eve have left the families devastated by the horrific acts of Mr. Pardo. In their time of grief they ask that the media respect their privacy and provide solitude to grieve for their loss.

They are extremely grateful for all of the thoughts and prayers that have been offered for them in this time of crisis from around the entire world. They have felt your love for them and the prayers said on their behalf.

While there are no words which can help to cure the hurt that they are suffering, the thought that so many have opened their hearts to them provides them comfort. Offers of donations have been made to the family and they are truly grateful to those people who have done so.

A fund has been set up for monetary donations to help the family and checks can be mailed to Ortega Family Fund, C/O Law Offices of Scott J. Nord, 500 N. Brand Blvd., Suite 550, Glendale, California 91203.

While donations of other kinds have been made, and they are truly appreciated, they are not in the position to accept them at this time. Please make any nonmonetary donation to the charity of your choice in the name of the family. It is their desire that in this tragedy some others may receive some benefit from all the generosity being offered to them. 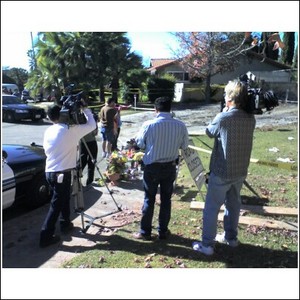 The happy home lays in ruins. Folks with Mapquest printouts parade by only to reach the end of the Cul-de-sac and have to navigate a tight turn.

Family friends and relatives of the victims come by the pay their respects.

A simple note sums up how many must feel:

“I hope that your family will heal and get past this tragedy.

Your family is in our thoughts and prayers.

May God be with you always.

May 2009 be filled with happiness.

The pictures are two of several I shot. One is of clearly grieving relatives approaching the burnt out house where the Ortega family once lived. The other shows a smaller group of the same relatives paying their respects at a memorial to the family. Camera crews captured the moment on video.

Nearly a week since the Christmas Eve Massacre, a Covina neighborhood is struggling to return to normal. Reports of media, looky-loos even a random politician or two have filtered into the newsroom.

How long is it appropriate for this sort of thing to go on?

We’re wondering that here today. If you have any thoughts, please feel free to share them.

Here’s some of the most recent stories recanting the tale of Bruce and Sylvia Pardo and the Christmas Eve Massacre:

Brian Day in the SGV Tribune: Details continue to emerge.

MONTROSE — Pictured to the left is the unassuming home where Covina massacre suspect Bruce Pardo lived.

Christmas decorations remain on display, which neighbors said he erected shortly after Halloween.

Neighbors, like most others who knew Pardo, say they are shocked the man they knew as friendly, gentle and helpful could be responsible for the killings in Covina.

A notice from the water department hung on the door, and the mailbox was overflowing with mail.

A Cadillac Escalade, which neighbors said belonged to Pardo, remained parked in the driveway.