WEST COVINA >> Police used bean bag rounds to subdue an uncooperative man following a short police chase early Sunday, officials said.
Fidel Pantoja, 26, of Covina, was booked on suspicion of felony evading of police and resisting arrest following the incident, which kicked off about 12:38 a.m., West Covina police Lt. Dennis Patton said.
Officers tried to pull over a car being driven by Pantoja in West Covina but he refused to yield, initiating a chase, Patton said. The pursuit came to an end minutes later when Pantoja stopped his car outside the Brunswick Covina bowling alley in the 1000 block of West San Bernardino Road.
Pantoja exited his car but ignored officer’s orders to surrender, the lieutenant said. Officers shot Pantoja with a bean bag round before taking him into custody.
A knife was found on the ground, within Pantoja’s reach, he said.
Pantoja, who has previous criminal cases pending, was being held in lieu of $155,000 bail pending his initial court appearance.

SAN DIMAS >> A man violently carjacked an elderly man outside a San Dimas restaurant Saturday before deputies, aided by the truck’s OnStar system, tracked down the vehicle, disabled it remotely and took the suspect into custody, authorities said.
The carjacking took place at 7:22 p.m outside a Red Robin restaurant, 565 W. Arrow Highway, Lt. Tonya Edwards of the sheriff’s San Dimas Station said.
The suspect, a man in his 20s, attacked a 74-year-old man and yanked him from his 2015 Chevy Silverado, Lt. Elisabeth Sachs said.
“(The suspect) struck him, knocked him to the ground, and stomped on his head,” she said. “The victim fought back, but the suspect was able to overcome him and drove off in his vehicle.”
Authorities were notified of the carjacking minutes later through OnStar, according to Lt. David Buckner, watch commander of the Los Angeles County Sheriff’s Walnut Station, whose deputies assisted in taking the suspect into custody.
An OnStar operator provided the sheriff’s department with “up-to-the- moment locations” of the white pickup truck, then remotely slowed it to about 5 mph after deputies spotted it heading south on the 57 Freeway.
The driver got out of the car and surrendered near the 91 Freeway about 8 p.m., Buckner said.
“He stole the wrong vehicle,” Buckner said.
Joshua Frontino-Deaton, 26, was booked on suspicion of carjacking, Sachs said. His city of residence was not available Sunday afternoon.
The carjacking victim was treated at a hospital for injuries and released later in the day, Sgt. Joe Bolanos said.
According to county booking records, he was being held in lieu of $100,000 bail pending his initial court appearance, scheduled Tuesday in Pomona Superior Court.

SOUTH EL MONTE >> Coroner’s officials Sunday released the identity of a 19-year-old passenger who died in a South El Monte solo-car crash from which the driver fled late Friday.
Jonathan William Loaiza of Bell Gardens died at the scene of the 9:40 p.m. crash on the northbound Rosemead Boulevard on-ramp to the eastbound 60 Freeway, Los Angeles County Department of Coroner Lt. Fred Corrall said.
The driver of the overturned 2006 Mitsubishi Galant fled from the crash scene and was not found, according to California Highway Patrol Officer T. Kinzler.
Detectives found two guns inside the crashed car and suspect the occupants may have been involved in the Pico Rivera shooting of a man who showed up at a hospital with a gunshot wound just before the crash, Los Angeles County sheriff’s officials said.
Sheriff’s officials released no further details regarding the Pico Rivera shooting.

WHITTIER >> Residents of a Whittier neighborhood awoke to discover Ku Klux Klan propaganda fliers strewn on their front lawns early Sunday, police said.
The packages consisted of three sheets of paper sealed in plastic bags, weighted with small rocks and pieces of candy, were first reported to police about 6:30 a.m., Whittier police Lt. Aaron Ruiz said. They were found in the 5400 block of Adele Avenue, as well as along neighboring Carley Avenue.
“There was no threatening language,” Ruiz said. The fliers contained political statements and material promoting the KKK.
No crime had been committed, he added.
Police in Fullerton noted a similar incident exactly one week prior on June 21. And additional KKK flier distributions were reported in Santa Ana in January and in Orange last year.

PASADENA >> A Los Angeles woman is fighting for her life at a hospital after she was struck and severely injured by a car while crossing Fair Oaks Avenue in Pasadena late Friday, officials said.
The crash took place about 10:30 p.m. along Fair Oaks Avenue and Congress Street, just outside of Huntington Hospital, Pasadena police Lt. Pete Hettema said.
The woman, who is in her mid-50s, was believed to be crossing mid-block when she was struck by a subcompact car, the lieutenant said.
She suffered major injuries and was hospitalized in critical condition, Hettema said.
The driver of the car, a man estimated to be in his 40s, remained at the scene and cooperated with investigators, he added.

GLENDORA >> Police arrested one suspected drunken driver, as well as five other people for other alleged crimes, and wrote 17 tickets during an overnight checkpoint, officials said.
The checkpoint took place from 7 p.m. Friday to 3 a.m. Saturday on Route 66, between Pasadena Avenue and Lemar Park Drive, Glendora police Cpl. Shawna Celello said in a written statement.
In addition to the one alleged DUI driver, police jailed five other people for various traffic- and license status-related offenses, the corporal said.
Officer issues 17 tickets and impounded eight vehicles, she added.
A total of 1,306 vehicles passed through the checkpoint.
Funding for the checkpoint was provided by a grant from the National Highway Traffic Safety Administration, through the California Office of Traffic Safety. 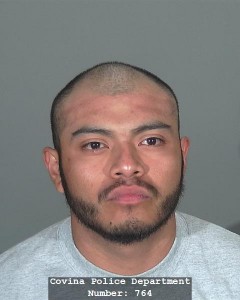 COVINA >> Police stopped a driver for a traffic violation but ended up arresting his passenger after an officer spotted the suspect stealing money from his friend’s wallet during the traffic stop early Saturday, officials said.
Victor Hugo Rojas-Salgado, 22, of Rowland Heights was arrested on suspicion of petty theft following the unusual incident, which unfolded about 1:45 a.m. in the 200 block of West College Street, Covina police Sgt. Gregg Peterson said.
Two officers stopped a car, suspecting the driver may have been intoxicated, the sergeant said. The driver was ultimately found to be sober, but was issued a ticket for a traffic violation.
But while one officer spoke with the driver outside the car, Rojas-Salgado helped himself to $20 from his friend’s wallet and placed it in his pocket, Peterson said. Rojas-Salgado apparently didn’t realize the second officer was watching.
The officer asked the driver if his passenger should be taking money, and arrested Rojas-Salgado after the driver told them his friend did not have permission.
Rojas-Salgado was released with a misdemeanor citation, Peterson said.

SOUTH EL MONTE >> A passenger died and the driver fled following a solo-car crash on a freeway on-ramp late Friday which investigators suspect may be connected to a shooting that had just occurred in Pico Rivera, officials said.
The rollover crash took place just before 9:40 p.m. on the northbound Rosemead Boulevard on-ramp to the eastbound 60 Freeway, near the Whittier Narrows Recreation Area, California Highway Patrol Officer Tony Polizzi said.
An unidentified driver had two passengers in a 2006 Mitsubishi Galant headed north on Rosemead Boulevard at an unknown speed just prior to the crash, CHP Sgt. T. Kinzler said in a written statement.
The driver lost control and the car struck the curb along the west side of the on-ramp, he said.
“(The Mitsubishi) traveled down the dirt embankment and overturned,” Kinzler said.
The driver fled from the wreck wand was not found, officials said. Two guns were discovered inside the crashed car.
Paramedics pronounced one of the passengers, a man estimated to be 20 years old, dead at the scene, CHP officials said.
His identity was not available Saturday morning pending positive identification and notification of family, Los Angeles County Department of Coroner Lt. David Smith said.
A second passenger also rode inside the Mitsubishi, officials said, though it was not initially clear whether that person remained at the crash scene or fled along with the driver.
Los Angeles County Sheriff’s Homicide Bureau detectives are also looking into the fatal crash and its possible connection with a shooting minutes earlier.
Prior to the crash, deputies responded to a local hospital after a gunshot victim arrived seeking treatment, officials from the Sheriff’s Headquarters Bureau said in a written statement.
“While they were at the hospital investigating, deputies received a traffic collision call of a rolled over vehicle with a man found dead inside,” the statement said. “They responded to the scene and found two firearms inside the vehicle.”
“Detectives are investigating reports that the occupants in the vehicle that rolled over may have been involved in some type of altercation with the gunshot victim from the hospital,” according to the sheriff’s department statement. “It is unknown at this time if the two incidents are related.”
No further details were released as detectives continued their investigation Saturday morning.
Both the northbound and southbound Rosemead Boulevard on-ramps to the eastbound 60 Freeway, remained shut down overnight, as well as the Rosemead Boulevard off-ramp of the eastbound 60 Freeway.

Police arrested three Glendora burglary suspects Thursday following a pursuit that ended in Covina and a neighborhood search that lasted more than eight hours, authorities said.
Charter Oak High School and the school district office went on lockdown in response to the incident, which began about 10 a.m., Glendora police Lt. Matt Egan said.
Police received a report of a suspicious person entering the backyard at a house in the 600 block of East Kirkwall Road, Egan said.
When officers arrived, they spotted a 16-year-old boy exiting the home and took him into custody after a brief foot chase, the lieutenant said. Two additional suspects fled in a car, leading officers on a pursuit to the 4900 block of Mangrove Avenue in Covina, Lt. Scott Strong said. Both Suspects ran from the car in opposite directions, police said.
One of the fleeing men, later identified as 19-year-old Jabaree Williams of Los Angeles, was quickly apprehended, Strong said.
The third and final suspect, 34-year-old Jerad Chaney of Los Angeles, eluded police until officers, including a SWAT team and a police dog, found him hiding in a residential garage shortly after 6 p.m., Strong said.
Police recovered from the suspects items stolen in the Kirkwall Road break-in, as well as property taken during another Glendora burglary earlier in the day, Strong said.
Nearby Charter Oak High School at 1430 East Covina Blvd. and the Charter Oak Unified School District offices at 20240 East Cienega Ave. were placed on lock down as police hunted for the alleged burglars.