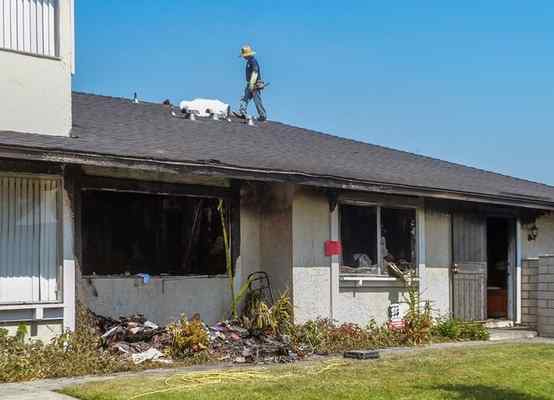 WEST COVINA >> Authorities have identified a 62-year-old woman who was found dead inside her West Covina townhome following a fire on Tuesday morning.
Grace Han Wu was pronounced dead at the scene of the fire, which broke out just after 7 a.m. in the 1300 block of East Parkside Circle, according to Los Angeles County Department of Medical Examiner-Coroner Assistant Chief of Operations Ed Winter.
A second person escaped from the burning home unharmed, Assistant Fire Chief Brian McDermott said.
The fire caused an estimated $100,000 in damage to Wu’s home and minor damage to two adjacent units, Fire Chief Larry Whithorn said.
West Covina firefighters, who were aided by Los Angeles County Fire Department firefighters, extinguished the flames within 30 minutes, officials said.
Once the fire was out, officials discovered Wu’s body, West Covina police spokesman Rudy Lopez said.
Her cause of death remained under investigation by coroner’s officials, while the cause of the fire was being investigated by the West Covina Fire Department and Los Angeles County Sheriff’s Department arson investigators.

LA HABRA >> Three attackers robbed another man outside a La Habra has station early Saturday morning, police said.
The crime took place shortly after 1 a.m. after the victim stopped to use a restroom at a gas station at La Habra Boulevard and Idaho Street, La Habra police Lt. Clint Angle said.
“Upon exiting, the victim was assaulted by three suspects who then stole his wallet,” the lieutenant said.
It was not clear if the victim required hospital treatment as a result of the attack.
The three robbers were last seen running north along Idaho Street, Angle said. Descriptions were not available. 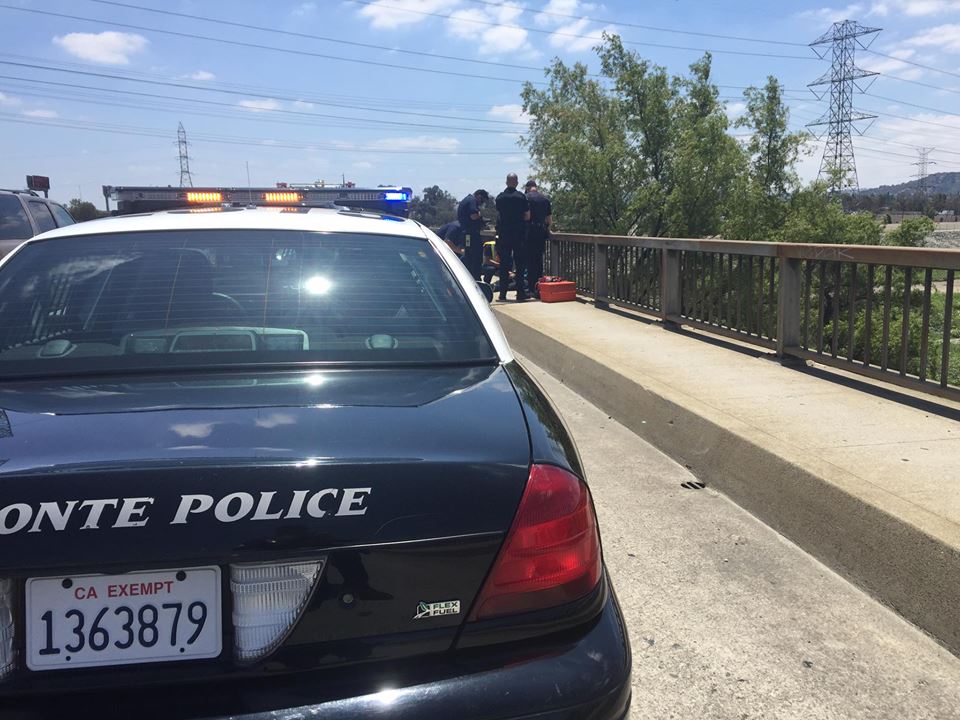 EL MONTE >> Police pulled a distraught man from the edge of a bridge spanning the San Gabriel River as he was preparing to jump on Saturday afternoon, authorities said.
Officers received a report about noon that a “suicidal subject” was seen on the exterior ledge of the Valley Boulevard bridge, just west of the 605 Freeway, El Monte police officials said in a written statement.
“Officer Fullington immediately established dialogue with the man, who was visibly distraught, while Officers approached from out of the man’s sight and were able to successfully gain physical control of the him and prevent him from going over,” according to the statement. “The officers’ quick thinking and training helped prevent what could have been a tragic situation.”
The main was taken to receive help, Lt. Ernie Cramer said.

ARCADIA >> An off-duty U.S. Customs and Border Protection agent shot two teenagers, killing one, after the boys allegedly attacked and tried to rob him in Arcadia late Friday, officials said.
The shooting took place about 8:15 p.m. in the area of Colorado Boulevard and 1st Avenue, Deputy Caroline Rodriguez of the Los Angeles County sheriff’s Information Bureau said.
The off-duty federal agent was walking down the sidewalk when three teenage boys attacked him from behind, she said in a written statement issued Sunday morning.
“One of the subjects hit him in the head several times while another subject pointed a handgun at the victim and demanded his property,” according to the statement. “The victim thought the subjects were going to rob and shoot him so he retrieved his department issued handgun. The victim shot at the subjects in an effort to defend himself.”
The suspect brandishing the handgun, a 15-year-old boy, as well as a second 14-year-old suspect were struck, officials said. The third teen, 14, ran away.
Both wounded teens were taken to an area hospital.
The 15-year-old suspect succumbed to his injuries just after 5:30 a.m. Saturday morning, Deputy Guillermina Saldana said. His identity was not available.
The wounded 14-year-old remained hospitalized with injuries described as non-life-threatening, Saldana said.
“The victim had some bruising to his face which did not require medical treatment,” Rodriguez said.
Police soon found the third suspect at a nearby home. He was booked on suspicion of robbery at Central Juvenile Hall in Los Angeles.
“The subject’s handgun was recovered at the scene,” Rodriguez said.
Arcadia police Lt. Vaughn Whalen declined to discuss the incident.
U.S. Customs and Border Protection officials could not be reached for comment Saturday.
No further details were released.
The investigation is being led by detectives from the sheriff’s Homicide Bureau. Anyone with information is urged to contact the sheriff’s Homicide Bureau at 323-890-5500. Tips may also be submitted anonymously to L.A. Regional Crime Stoppers at 800-222-8477.

WEST WHITTIER >> A masked man made off with several hundred dollars after holding up a West Whittier motel clerk at gunpoint, officials said.
The crime unfolded about 9:45 a.m. at Motel 6, 8211 Pioneer Blvd., in the unincorporated county area, Los Angeles County sheriff’s Sgt. William Morris said.
The robber entered the office of the motel, brandished a handgun and demanded money from a man working behind the counter, the sergeant said.
After obtaining several hundred dollars, the robber ran from the business and was last seen heading north along Pioneer Boulevard.
He was described as a man of unknown race, about 5 feet 9 inches tall, 190 pounds, wearing a ski mask, sunglasses and gloves, Morris said.
Anyone with information can reach the sheriff’s Pico Rivera Station at 562-949-2421. Tips may also be submitted anonymously to L.A. Regional Crime Stoppers at 800-222-8477.

SAN MARINO >> Two women and a man are facing burglary and child endangerment charges after they were caught in the middle of a San Marino burglary with four young “dirty and unfed” children in tow earlier this week, police said.
Police arrested the three suspects and placed the children, between 2 and 6 years old, in the custody of the Los Angeles County Department of Children and Family Services following the alleged break-in, which took place about 1 p.m. Monday in the 2100 block of Oak Knoll Avenue, according to San Marino police Sgt. Tim Tebbetts.
A woman first called police to report her car, which was parked inside her locked garage, had been broken into, the sergeant said in a written statement. “The front driver-side window had been smashed and the center console ransacked,” he said.
When police arrived, the resident told them a window of the home which she had left closed was now open, and an air conditioning unit that had been shut off was running.
Officers used the resident’s key to enter the home, where they encountered two women, a man and four small children, Tebbetts said.
“They also recovered jewelry the suspects could not identify as theirs, mail, drug paraphernalia and property from the burglarized vehicle,” Tebbetts said.
“The children were between 2 and 6 years old and were dirty and unfed,” he said. “The four children were cleaned, fed and transported to the San Marino Police Department until social workers from the Los Angeles County Department of Children and Family Services responded to take custody of the children.”
Police determined one of the arrested women was the mother of three of the children, and the other was the mother of one, Cpl. Brian Wong said. The male suspect was described a one of the women’s boyfriend.
Arrested were Norina Ann Lopez, 26, Sereena Anita Lopez, 24, and Randy Fernando Andrade, 26, all of Long Beach, according to police and Los Angeles County booking records.
Norina Lopez has pleaded not guilty to one charge of burglary and three charges of child endangerment, while Sereena Lopez has denied one count of burglary and one charge of child endangerment, and Andrade had pleaded not guilty to one count of burglary and two counts of child endangerment, Los Angeles County Superior Court records show. All three are scheduled to appear for hearings on June 13 in the Alhambra courthouse.
The suspects were being held in lieu of $330,000 bail, $150,000 bail and $80,000 bail, respectively.
Anyone with information regarding the investigation is asked to contact San Marino police Detective Patrice Garcia at 626-300-0726. Tips may also be submitted anonymously to L.A. Regional Crime Stoppers at 800-222-8477.