LA PUENTE — A 14*-year-old boy was hospitalized in serious condition Sunday after he was stabbed by apparent gang members, authorities said.

The crime occurred just before 6 p.m. in the 700 block of Tonopah Avenue, Sgt. S. Bracken of the sheriff’s Industry station said.

The wounded teen, who is not believed to have gang ties, was approached by a group of male Latinos who shouted out “Bassett” — referring to an area street gang — before attacking the boy, Bracken said.

The victim was stabbed three to four times in the abdomen, he said.

The attackers were last seen fleeing the area in a dark, 2-door compact car, Bracken said.

A man dubbed the “Irreconcilable Differences Bandit” was sentenced to 13 years in state prison Friday for his role in 13 Los Angeles County Bank robberies, including a Jan. 4 heist at a Pasadena Bank of America branch, as well as a residential robbery.
Alan Freidbaum, 56, of New Jersey entered a guilty plea at Pasadena Superior Court and was immediately sentenced by Los Angeles County Superior Court Judge Teri Schwartz, a DA’s office spokeswoman said.
He was also ordered to pay more than $38,000 in restitution to his victim’s and the state’s Victim’s Restitution Fund.
Freidbaum earned his moniker by talking to one of the tellers he robbed about his divorce.
In addition to Pasadena, Freidbaum also robbed in Burbank, Encino, Glendale, Hermosa Beach, Los Angeles, Santa Monica and Torrance, officials said.
He was captured on June 5 after robbing a Wells Fargo branch in Glendale.
As part of a plea bargain agreement, other counts of burglary were dismissed.

As you know by now the search for remains at 1920 Lorain Road in San Marino has begun. Officials expect it to last several days, according to Los Angeles County Sheriff’s spokesman Steve Whitmore.

Here’s some pictures I shot at the scene. They dont’ say much , but interesting nonetheless.

Several neighbors had fascinating recollections of Clark Rockefeller, who was Christopher Chichester back in the 1980s. He’s a person of interest int he 23-year-old missing persons case/homicide investigation.

Sheriff’s spokesman Steve Whitmore speaks about the case. 1920 Lorain is in the background. 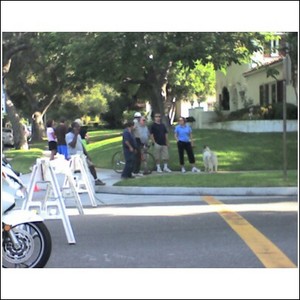 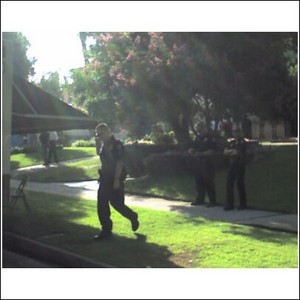 Willene Garcia, whose son Albert wsa shot and killed in Montebello on June 21, heard today that a juveniule suspected of involvement in the slaying has been arrested. Here’s a letter from Willene:

Earlier today I received a phone call from the Chief advising the arrest of one suspect.  I was told a follow-up call would be placed to me later on today.

I’m very happy that they caught this guy. I’m curious to find out who he is and what he looks like.  I cannot wait to see him face to face.  I want him to know exactly what he has taken from me and my family.  Albert’s brother Dominic cries himself to sleep almost every night, and so do I.  Dominic started school this week and it was rough.  Usually Albert would give him a Pep-talk before starting school and he wasn’t there this time to do that.

The thing I miss most about Albert is how loving he was.  He would tell me he loved me all the time and give me a big hug.  When I was sick he would be the one to take care of me.  He was like the little man of the house.

LA Weekly this week chronicles the case of a serial killer on the prowl in south Los Angeles. The killer who was prolific in the mid 1980s resurfaced in 2002 and 2003, according to the Weekly, who gave the person or persons the moniker Grim Sleeper:

Local journalists haven’t even assigned him a creepy nickname, like Night Stalker (Grim Sleeper was chosen by the Weekly to mark his 13 years of inactivity before killing again).

It’s coincidental that I began my column this week on the crime wave of 1985 and 1986, because apparently the Grim Sleeper was most prolific during this period. Going through teh Tribune archives over the past several days, I believe I read some news accounts of the at least three of the slayings. I’ll post up scans later this week.

Montebello police Chief Dan Weast called to say that officers have made an arrest in the double homicide that shocked the city over summer.

Twelve-year-old Albert Anthony Garcia and his father Juan were gunned down at a graduation party on June 21. Two others were injured in the shooting. Several weeks ago I wrote a column criticizing the Montebello PD for a lack of progress in the case.

This from the US Department of Justice in Los Angeles:

Special agents with the Federal Bureau of Investigation this morning arrested a Culver City man on charges that he violated federal copyright laws by posting nine songs from Guns N’ Roses’ unreleased album Chinese Democracy on his website.
Kevin Cogill, who uses the online moniker “Skwerl,” admitted to investigators that he posted the songs on his website, www.antiquiet.com, according to a criminal complaint.
Cogill, 27, is expected to make his initial court appearance this afternoon in United States District Court in Los Angeles. If Cogill is convicted of the copyright infringement charges, he faces a maximum statutory sentence of three years in federal prison, or five years if proven that he did it for financial gain.

After a suggestion from yours truly, the FBI has christened an bank robbery believed to have struck two Arcadia banks in recent months the “Goldilocks Bandit.”

The robber is believed to have robbed a Bank of the West branch on Aug. 8 and a Wachovia bank on July 18.

While speaking to FBI officials about the seemingly connected robberies several weeks ago, I suggested the name Goldilocks Bandit might be fitting, since the robber was seen wearing a blond wig. Apparently they agreed.