ANGELES NATIONAL FOREST >> Deputies are investigating after a person was fatally shot at a shooting range in the Angeles National Forest north of Azusa Sunday afternoon.
The incident was first reported shortly before 4 p.m. at the Burro Canyon Shooting Park, 22100 East Fork Road, Los Angeles County sheriff’s Lt. Thomas Reid said.
It was not initially clear whether the shooting was accidental, criminal or a suicide, he said.
The dead man was estimated to be in his 20s, Reid said.
No further details were available.
Detectives from the sheriff’s Homicide Bureau were summoned to the scene to take charge of the investigation.
Anyone with information can reach the sheriff’s Homicide Bureau at 323-890-5500. Tips may also be submitted anonymously to L.A. Regional Crime Stoppers at 800-222-8477.

EAST PASADENA >> A married couple hid in a bathroom at their home as intruders forced their way into their house in the unincorporated county area of East Pasadena early Sunday.
The crime took place about 1:15 a.m. at a home in the 3600 block of Grayburn Road, Los Angeles County sheriff’s Sgt. Jose Carbajal said.
The couple first heard what they believed to be gunshots coming from their backyard, the sergeant said.
They locked themselves in a bathroom as several intruders, a least one wearing a mask, made their way into the home through a back door, he said.
Deputies arrived at the scene within minutes, but the robbers were already gone, Carbajal said. Deputies searched the area but found no suspects.
Investigators did not initially find any physical evidence of gunfire, and no other neighborhood residents reported hearing shots, Carbajal said.
It was unclear Sunday what may have been stolen from the home. No injuries were reported.
Anyone with information can reach the sheriff’s Temple Station at 626-285-7171. Tips may also be submitted anonymously to L.A. Regional Crime Stoppers at 800-222-8477.

PASADENA >> Police used a K-9 to apprehend a Riverside County man early Sunday following reports that he had been pointing a handgun at passers-by in an upscale residential neighborhood in Pasadena.
Recently released convict Jordan Allenswan Creger, 26, of Wildomar, was booked on suspicion of assault with a deadly weapon and weapons violations, following the incident, which began about 7 a.m. in the 700 block of South Orange Grove Boulevard, according to Pasadena police officials and Los Angeles County Superior Court records.
Officers received a report of a man “pointing his gun at random people,” Lt. Mark Goodman said.
Police found the suspect, later identified as Creger, hiding nearby in a front yard in the 300 block of Markham Place, officials said.
After about 30 minutes of negotiation, police sent in a dog, allowing them to take Creger into custody.
“A search of the area in which the suspect was hiding led to the discovery of a loaded firearm,” Pasadena police officials said in a written statement.
Creger, who appeared to be under the influence of some sort of substance, was taken to a hospital for examination and treatment of minor abrasions suffered during his arrest prior to booking, Lt. Mark Goodman said.
His motive, as well as what he was doing in the affluent Pasadena neighborhood, remained a mystery.
His motive, as well as what he was doing in the affluent Pasadena neighborhood, remained a mystery.
Police Chief Phillip Sanchez commended the involved officers for their “sound decision, courage and tactics,” allowing a safe outcome and the avoidance of a lethal force encounter.
Sunday represented Creger’s sixth arrest in Los Angeles County since July of last year.
Most recently, he was arrested in Montebello on May 31, records show. He was ultimately convicted of resisting or obstructing police, while charges of carrying a concealed dirk or dagger and possession of drug paraphernalia were dismissed.
Creger was sentenced to 120 days in county jail and released on July 22, after serving 52 days behind bars, records show.
Creger was convicted of grand theft in the West Covina branch of Los Angeles County Superior Court in January, according to court records. He served 140 days of a 150 days sentence before being released on June 1.
And he was convicted of burglary in August of 2015 in the West Covina courthouse following an arrest in the San Dimas area, records show.
He was sentenced to one year in county jail, but was released in November of 2015 after serving 124 days in custody.
Creger was being held in lieu of $50,000 bail pending his initial court appearance.

ALTADENA >> A man was expected to survive his wounds following a shooting in Altadena Saturday night, authorities said.
Deputies received a report of a “person down” about 9 p.m. at Lincoln Avenue and Figueroa Drive, Los Angeles County sheriff’s Lt. Daniel Stanley said.
They found a man estimated to be in his late-20s suffering from a gunshot wounds to his legs, the lieutenant said. He was hospitalized with injuries not believed to be life-threatening.
No suspect description was available. The circumstances of the shooting remained under investigation.

PASADENA >> Two men suffered wounds in a shooting near Robinson Park in Pasadena late Saturday, police said.
The gunfire was first reported about 8:20 p.m. at Hammond Street and Morton Avenue, Pasadena police Lt. Jason Clawson said.
Arriving officers encountered one man suffering from gunshot wounds at the scene, he said. He was taken to a hospital in unknown condition.
A second shooting victim arrived at the hospital a short time later, Clawson said. His condition was also unclear.
Both victims were described as men estimated to be in their 50s, according to the lieutenant.
No further details regarding the circumstances of the shooting were available as the investigation remained in its early stages.

COVINA >> A 33-year-old West Covina woman died in a crash early Saturday after an SUV ran a red light and slammed into her pickup truck in an unincorporated county area just outside of Covina, authorities said.
Leslie Mendiola died in the 6 a.m. collision in the intersection of Lark Ellen Avenue and Cypress Street, according to Officer J. Smith of the California Highway Patrol’s Baldwin Park area office.
She was driving a 2006 Ford F-150 pickup truck south on Lark Ellen Avenue in the left-hand lane just prior to the crash, Smith said. A 27-year-old Covina woman was driving a 2002 Ford Expedition west on Cypress Avenue.
“(The driver of the Expedition) failed to stop at the circular red light at the intersection of Lark Ellen Avenue and Cypress Street,” Smith said. “Due to (her) failure to stop at the circular red light, the front of the Ford Expedition collided into the left side of the Ford F-150.”
Paramedics pronounced Mendiola dead at the scene.
The driver of the Expedition was taken to a hospital for treatment of injuries described as minor, Smith said.
The investigation was ongoing Saturday afternoon, and the driver had not been arrested. 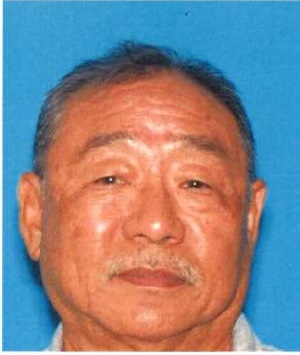 LOS ANGELES >> Police sought the public’s help Saturday in finding a 71-year-old Pasadena man with Alzheimer’s disease who went missing in downtown Los Angeles Friday evening after being released from jail following a DUI arrest in downtown Los Angeles.
Gerald Masao Sakamoto was last seen just after 7:30 p.m., when he was released from the Inmate Reception Center in Los Angeles, according to Pasadena police and Los Angeles County booking records. He had been arrested on suspicion of intoxicated driving by officers from the California Highway Patrol’s Glendale-Verdugo Hills area office about 3 a.m. after being involved in a freeway crash.
But two-and-a-half hours later, Sakamoto was nowhere to be found, Pasadena police Lt. Jason Clawson said. His wife reported him missing.
Sakamoto suffers from medical issues, including Alzheimer’s disease, police said.
He’s described as Asian, 5 feet 3 inches tall, 165 pounds, with black hair and brown eyes.
Anyone with information is asked to contact the Pasadena Police Department at 626-744-4241. 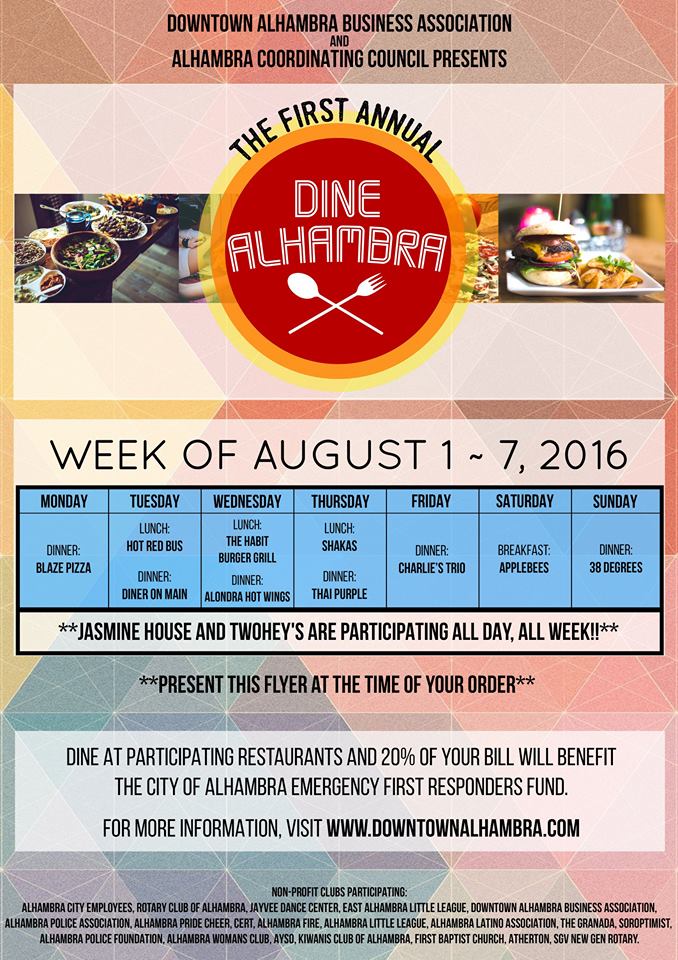 ALHAMBRA >> Restaurants throughout Downtown Alhambra will be chipping in for first responders over the coming week during the first “Dine Alhambra” event, officials said.
Monday through Aug. 7, local restaurants will be taking turns daily donating 20 percent of their proceeds to the Alhambra Emergency First Responders Fund when customers show the Dine Alhambra flyer, either in print or on their cell phone, city officials said in a written statement.
Jasmine House and TwoHey’s will be participating all day, each day of the week, organizers said.
Blaze Pizza will host the event for dinner on Monday. Hot Red Bus will host lunch on Tuesday, followed by dinner at Diner on the Main.
Lunch will be hosted Wednesday the Habit Burger Grill, where Alhambra police and fire personnel will be on-hand. Dinner will follow at Alondra Hot Wings.
Thursday’s lunch will be at Shakas, then dinner at Thai Purple. A dinner will be hosted Friday by Charlie’s Trio.
Breakfast is planned Saturday at Applebees, and a 38 Degrees is hosting dinner Sunday evening.
For more information, visit www.downtownalhambra.com.