Kristin young was one of six killed Sunday in a wrong way collision on the 60 Freeway in Diamond Bar. This is from what is believed to be her Instagram account:

It was a sad weekend in Hollywood, what with the deaths of Peter O’Toole, Joan Fontaine and Tom Laughlin.

Of the three, men of my generation were probably most affected by Laughlin and his role as Billy Jack, a ex-Green Beret who kicked some serious racist ass outside an Arizona reservation:

Here’s what was posted on his website this morning:

Tom Laughlin passed away at sunset
on Thursday, December 12, 2013
near his home in Thousand Oaks, California.
He was 82.
Tom is survived by his wife of 60 years, Delores,
his three children, and his five grandchildren.
Services have not yet been announced.

PETA wants to see a Sea World’s float in the Rose Parade that looks something like this.

Angered by a Sea World entry in Pasadena’s annual Tournament of Roses Parade, members of the animal rights group People for the Ethical Treatment of Animals (PETA), have demanded officials make changes in the Sea World float design.

Here’s a portion of the letter:

I’m contacting you once again, both as a longtime Pasadena resident and on behalf of People for the Ethical Treatment of Animals (PETA). We have a proposal that could resolve the controversy caused by the Tournament of Roses’ decision to include a SeaWorld float in the Rose Parade: Require SeaWorld to represent its treatment of orcas more accurately by using the attached design with a slight tweak to the parade’s theme—”SeaWorld: Where Dreams Never Come True.

The skeletal remains of several people have been uncovered in the high desert near Victorville, according to the San Bernardino Sun.
The grave was discovered by a motorcyclist, authorities said.
The story is developing. You can read more on the SB Sun’s website.

A man killed his daughter and her girlfriend after a heated argument in El Monte, officials said. Here’s the complete story from reporter Ruby Gonzales.

For years we’ve heard the anecdotes about youths of color being targeted by Pasadena police. A data study of five years of arrests stats done by reporter Sarah Favot seems to lend credence to many of those stories. Here’s a link to the story.

As a bonus, our digital content editor Dan Tedford created the graphic below. It tells the story, and also shows that arrests are down since 2010:

Here’s what we know so far:
The shooting occurred about 10:30 a.m. in the Kings Villages apartment complex, Sanchez said.
“Pasadena police officers on patrol observed a male black approximately 23 in the area of Hammond and Morton. THe officers elected to make an enforcement stop and teh suspect fled,” Sanchez said. The officers gave chase into a nearby housing complex.
“The suspect allegedly produced a firearm and one officer fired,” Sanchez said.
The unidentified man was hit by gunfire, Sanchez said. He was taken to Huntington Memorial Hospital.
A gun was recovered at the scene, Sanchez said.
Neither officer was hurt in the shooting, Sanchez said.
It the first officer involved shooting in Pasadena since the slaying of Kendric McDade on March 24, 2012.
Our story is developing here:
As for the tweets coming out of Pasadena?
Here’s a stream:
Tweets about “Pasadena” 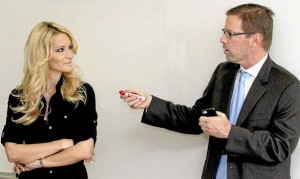 The San Marino Historical Society found a video of the infamous 1984 “Father’s Night” production that featured a guy they knew then as Christopher Chichester singing and dancing. Here’s an exclusive sneak peak of the video that you won’t see anywhere else.
Turns out Chichester’s real identity was Christian Karl Gerhartsreiter, a German national who would later become Clark Rockefeller. Earlier this year Gerhartsreiter was convicted in the 1985 slaying of San Marino resident John Sohus and remains linked to the disappearance of Sohus’ wife Linda. He was recently sentenced to a life term in state prison. You can read about the case in my book “Name Dropper” or check out our extensive archive of stories on the Pasadena Star-News website.
Here’s the video: