John Molina Jr. of Covina on Saturday had the biggest victory of his career when he won a 12-round unanimous decision over former world champion Ruslan Provodnikov of Russia in the junior welterweight main event at Turning Stone Casino in Verona, N.Y. Molina won by scores of 115-113, 116-112 and 117-111.

Molina, a powerful hitter known for getting into ring wars, boxed more than he ever has in securing the victory. His best friend was his left jab, with everything else working off it.

Afterward, Molina, 33, noted that he didn’t have much of an amateur career and that “I believe I’m getting ready to  hit my stride.”

Molina (29-6, 23 KOs)  was asked if he had any concern about the scorecards before they were read. His response spoke volumes.

“I think it was self-explanatory,” he said on the Showtime telecast. “A fighter knows when he won a fight in the ring. I won that fight.”

“Today the decision was the right thing,” he said. “Molina won the fight. He was better tonight.”

Also Saturday, on HBO, Vasyl Lomachenko (6-1, 4 KOs) of the Ukraine became the first fighter to win two world titles in his first seven fights when he knocked out Roman “Rocky” Martinez (29-3-3, 17 KOs) of Puerto Rico in the fifth round at Madison Square Garden to take Martinez’s super featherweight championship.

A mean two-punch combination put Martinez on the canvas, time of the end coming at 1:09. 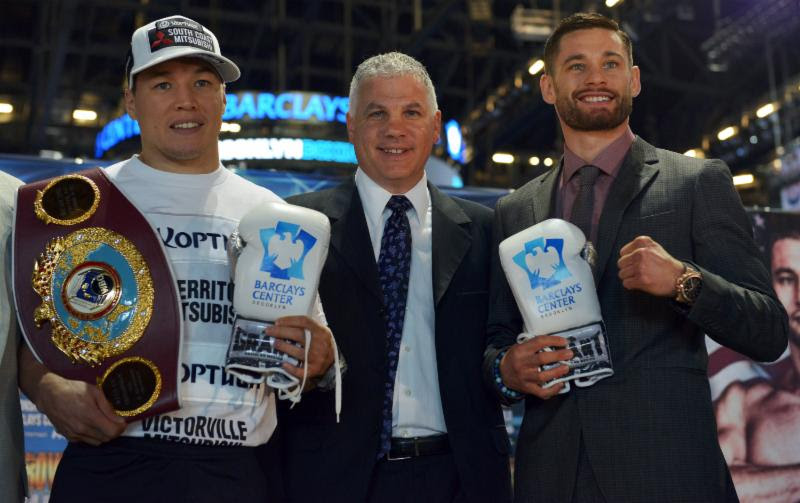 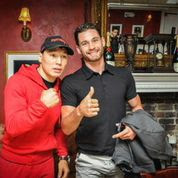 Junior welterweight champion Ruslan Provodnikov of Russia will be ringside at the Venetian Resort in Macau, China on Saturday when Manny Pacquiao and Brandon Rios square off there in the welterweight main event (on HBO pay-per-view).

Provodnikov and Pacquiao are friends and former sparring partners. Both are trained by Freddie Roach.

“I made sure I was in Macau to support my friend Manny Paquiao in his big return to the ring, and I will be rooting for him in this fight.”, Provodnikov said.

Provodnikov, a hard puncher, is coming off a 10th-round TKO of Mike Alvarado in October; Provodnikov took Alvarado’s title in the process.

Ruslan Provodnikov entered his fight Saturday with junior welterweight champion Mike Alvarado with the reputation of a vicious fighter. Provodnikov lived up to that by stopping a battered and beaten Alvarado after the 10th round at 1stBank Center in Broomfield, Colo., near Denver. Provodnikov took Alvarado’s championship belt.

Both fighters had battered faces. Alvarado was decked twice in the eighth round.

After the 10th round, referee Tony Weeks asked Alvarado if he wanted to continue. Weeks was blocking Alvarado, so his response was not seen or heard  on the HBO telecast. But Weeks then said, “This fight’s over,” and waved it off as Alvarado sat on his stool.

Most boxers who become successful in the pro ranks started as very young amateurs. We’re talking 8, 9 years old. At the latest. That’s why it’s always cool to see someone get a late start and become world champion. Such is the case with Denver’s Mike Alvarado, who Oct. 19 will defend his junior welterweight belt against hard-hitting Ruslan Provodnikov of Russia at First Bank Center near Denver (on HBO).

Alvarado was kind of in no-man’s land a couple of years out of high school when the boxing bug bit him at the age of 20.

“I guess it was just the way I was living,”Alvarado said via telephone this week, when asked what prompted him to take up the sweet science at that late stage. “I mean, after high school I wasn’t really doing anything. You know, work or nothing. So one day I was figuring out what to do with myself and I went to the gym. I was just so determined to do something. I mean, I was multi-talented. I played every sport you can think of. I was a wrestler my whole life.
“I was just so curious what I could do with it, and it was just meant to be. I just went with it and stood with it and gave it my all and it blossomed.”

Mike Alvarado of Denver and Ruslan Provodnikov of Russia will square off in a junior welterweight title fight Oct. 19 at First Bank Center in Denver (on HBO), YahooSports.com and BoxingScene.com reported Thursday.

This could be a good one. Alvarado’s past two fights were against Brandon Rios. Rios stopped Alvarado in the seventh round of a slugfest in October at Home Depot Center. Alvarado boxed more in their rematch in March in Las Vegas and came away with a unanimous decision.

Provodnikov most recently engaged welterweight champion Timothy Bradley in a barnburner at Home Depot Center in March, Bradley getting a narrow decision.

The event is being promoted by Top Rank Inc.

A fight between interim junior welterweight champion Mike “Mile High” Alvarado of Denver and Ruslan Provodnikov of Russia is in the works for Oct. 19 at a site to be determined. It would likely be televised by HBO.

According to a story on BoxingScene.com, Provodnikov has already signed his contract. But Alvarado said he was not happy with the money being offered at this moment.

We tried to reach out to Alvarado’s promoter, Bob Arum, to no avail. Arum did tell his Top Rank Inc. spokesman, Lee Samuels, he would speak about it more today when he meets with reporters for a luncheon in Hollywood.

According to Samuels, the fight is not close to being done. If it comes to fruition, Alvarado (34-1, 23 KOs) would be taking on a fighter who gave welterweight champion Timothy Bradley all he could handle in March at Home Depot Center (now StubHub Center). Bradley won a narrow decision, but he was decked by Provodnikov (22-2, 15 KOs) in the 12th round.