Andrew Toles is one of two Dodgers who will appear on their first opening day roster today. (Hans Gutknecht/Staff photographer)

Toles is leading off against the San Diego Padres in the first game of the season for both teams.

“We like Andrew in the batter’s box against right-handed pitchers,” Dodgers manager Dave Roberts said. “To get at-bats in there, the speed element, and have Corey (Seager) behind him — also, just to have Logan (Forsythe) somewhere in the middle to break up Adrian (Gonzalez), Joc (Pederson) and Yasmani (Grandal), there’s a lot of similarities with those guys. To have a right-handed grinder-type bat in the middle, it also sandwiches Adrian around two right-handed bats. Strategically it could be a benefit for us.”

END_OF_DOCUMENT_TOKEN_TO_BE_REPLACED

CHICAGO — Andrew Toles’ ascent to the top of the lineup is complete.

Toles, a 24-year-old rookie who began the season in Single-A, will lead off Game 6 of the National League Championship Series for the Dodgers on Saturday. It’s the first time he’s batted leadoff in a major league game.

Dodgers manager Dave Roberts has used Chase Utley in the leadoff spot against right-handed pitchers throughout the series. (Right-hander Kyle Hendricks is starting Game 6 for Chicago.) Utley is giving the Dodgers longer at-bats — he’s seen 4.03 pitches per plate appearance to 3.70 for Toles — but is still looking for his first hit in the series. Toles has five hits, including two doubles, and one walk in 10 at-bats.

Toles batted second this season once, in September, but otherwise hasn’t hit higher than seventh in his time with the Dodgers.

Here are the full lineups for both teams:
END_OF_DOCUMENT_TOKEN_TO_BE_REPLACED

END_OF_DOCUMENT_TOKEN_TO_BE_REPLACED

SAN DIEGO — Dave Roberts said that rookie outfielder Andrew Toles will be on the Dodgers’ roster for the National League Division Series next week against the Washington Nationals.

Toles, 24, has a .311/.363/.505 slash line in his first 46 major league games. He’s gotten more frequent playing time in left field during Josh Reddick‘s hot September. Roberts spoke Thursday about the possibility of Toles platooning with Howie Kendrick in left field in the postseason:

The Nationals’ rotation is anchored by right-handers Max Scherzer and Tanner Roark; Gio Gonzalez is the only lefty expected to start a game for them in October. That ought to give Toles (and the Dodgers’ other left-handed hitters) plenty of plate appearances in the playoffs. 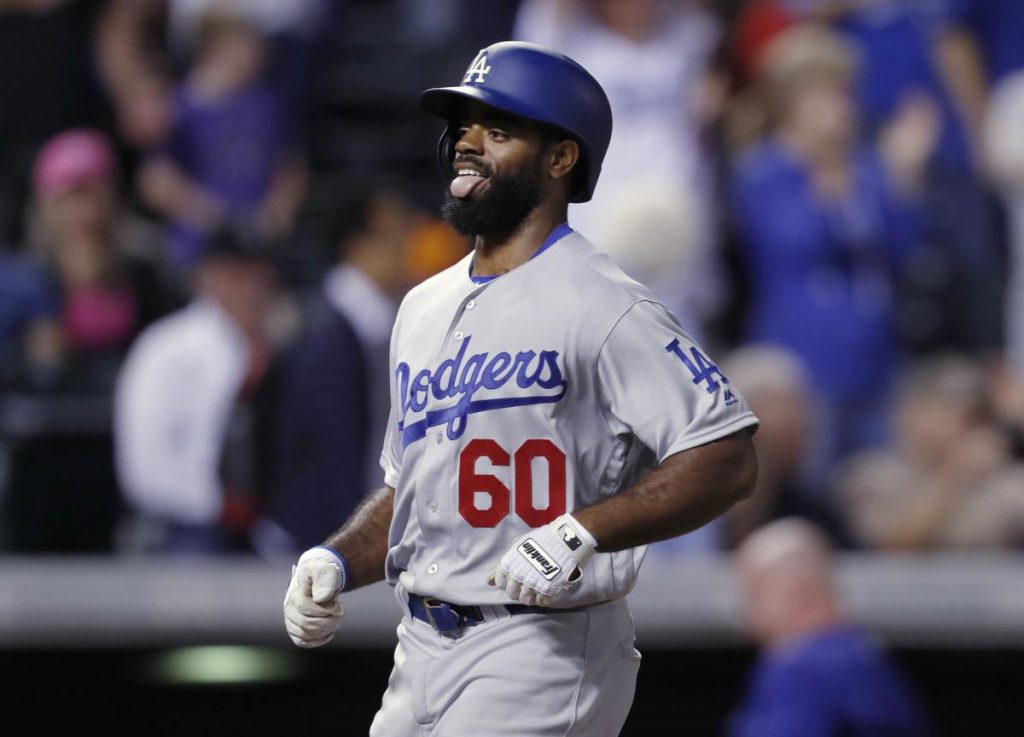 Andrew Toles hit his first career grand slam with two outs in the ninth inning Wednesday in Colorado, lifting the Dodgers to a 10-8 win over the Rockies. (Associated Press photo)

The Dodgers became the second team to rally from a six-run deficit in the eighth inning to win a game this season, using Andrew Toles‘ first career grand slam to beat the Rockies 10-8. The box score is here. The photo gallery is here.

Rob Segedin is still chasing his MBA degree in his spare time.