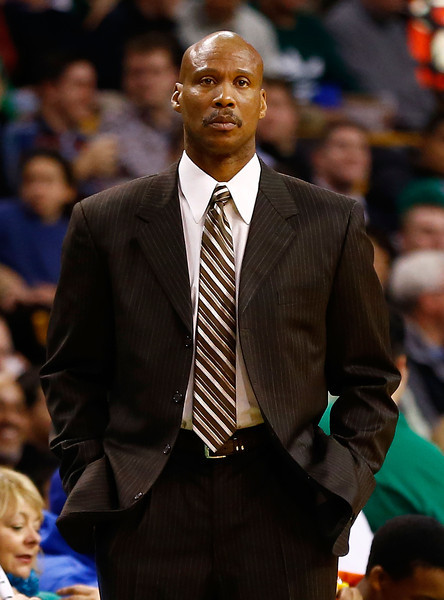 BOSTON, MA – DECEMBER 19: during the game on December 19, 2012 at TD Garden in Boston, Massachusetts. NOTE TO USER: User expressly acknowledges and agrees that, by downloading and or using this photograph, User is consenting to the terms and conditions of the Getty Images License Agreement. (Photo by Jared Wickerham/Getty Images) *** Local Caption ***

In what could serve as a sign that he is considered the favorite in the Lakers’ coaching search, Byron Scott talked with Lakers general manager Mitch Kupchak and vice president of player personnel Jim Buss in what marked his second interview regarding the vacant head-coaching position.

The Lakers did not make any offer or provide any clarity in where they will take their coaching search. But Scott is believed to be the only candidate to have two interviews with the Lakers thus far.

The Lakers have also interviewed a slew of other candidates with head-coaching experience, including Kurt Rambis, Alvin Gentry, Lionel Hollins and Mike Dunleavy, though Dunleavy only met with Kupchak. The Lakers also had informal discussions with George Karl. The Lakers plan to have follow-up interviews with other candidates and possibly ones they have not spoken with yet.

It is considered only a 50-50 chance that the Lakers have a coach before the NBA Draft on June 26. The Lakers actually may not have a coach once free agency begins on July 1. That is because the Lakers’ one of several recruitment tools could entail telling free agents they could have input on their next coach.
END_OF_DOCUMENT_TOKEN_TO_BE_REPLACED 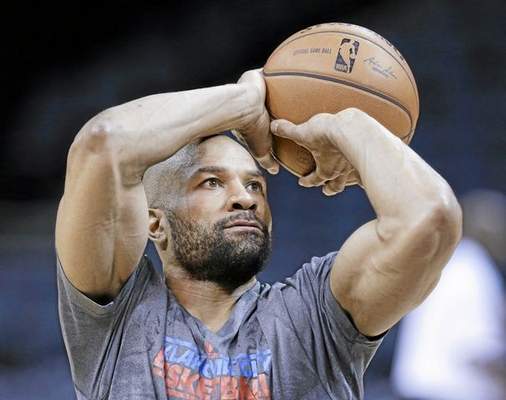 The Lakers have ruled out pursuing Derek Fisher as a potential head-coaching candidate: mark humphrey – the associated press

The Lakers have narrowed down their slow, exhaustive coaching search only to candidates that have previous head-coaching experience, according to a league source familiar with the situation.

Where that ends up remains to be seen. It is a “50-50 chance,” as one league source put it, that the Lakers will hire a coach before the NBA Draft on June 26. But it appears safe to rule out one prominent candidate to coach the Lakers: Derek Fisher. 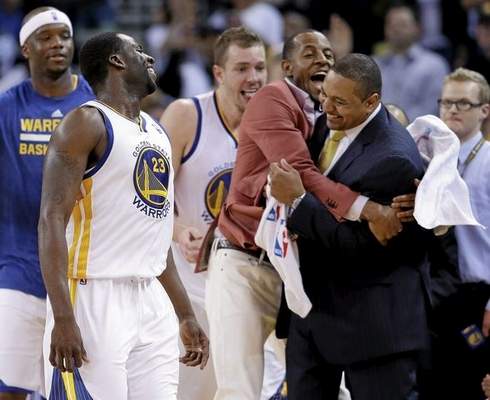 Once they sit together in the broadcast booth, ESPN NBA analysts Jeff Van Gundy and Mark Jackson never run out of things to say and opinions to share.

But the two became awfully silent on one issue. Both declined to specify both on their level of interest in the Lakers’ vacant-head coaching position and whether the front office has reached out to them or their representatives about an interview.

“I found it in everybody’s best interest never to comment on jobs,” Van Gundy said Wednesday in a conference call on Wednesday to promote the 2014 NBA Finals between the San Antonio Spurs and Miami Heat that begins Thursday on ABC. “I don’t think it does the team any good or the individual coach. If teams want to state what their plans are before they ever name a coach, that’s up to them. I think it’s best that I don’t get involved with that.”

For once, Jackson echoed his partner’s take.

“I totally agree,” Jackson said. “Obviously I think they will do an incredible job and they will pick an outstanding coach to lead them going forward.”
END_OF_DOCUMENT_TOKEN_TO_BE_REPLACED 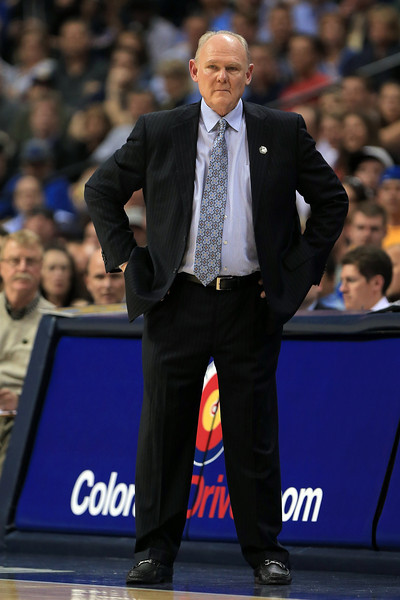 The Lakers once frustrated him with endless playoff series victories that ended his season. But will George Karl patrol the sidelines as the Lakers’ coach and ensure that postseason success returns?

Karl talked informally over the phone with Lakers general manager Mitch Kupchak shortly before the Lakers spent the last two weeks interviewing candidates about the team’s head-coaching vacancy, according to a league source familiar with the discussions. But that has yet to morph into a formal interview.

Both the Lakers and Karl have their reservations about a partnership for various reasons. Karl runs a fast-tempo system after Mike D’Antoni encountered a divided locker room surrounding his up-tempo style. That included Kobe Bryant, whom Lakers general manager Mitch Kupchak has said will be most effective operating from the post entering his 18th season after suffering two major injuries. Bryant missed the first 19 games of last season while rehabbing a left Achilles tendon, and then appeared in only six games before suffering a season-ending left knee fracture. Karl also had a testy relationship with another prolific scorer in Carmelo Anthony because his high volume shooting contradicted his hope for a balanced offense.

Considering his extensive NBA head-coaching experience with stops with the Cleveland Cavaliers (1984-86), Golden State Warriors (1986-88), Seattle Supersonics (1992-98), Milwaukee Bucks (1998-2003) and the Denver Nuggets (2005-13), Karl also has some hesitation in coaching the Lakers in what appears to be a rebuilding stage.
END_OF_DOCUMENT_TOKEN_TO_BE_REPLACED

After providing the voice of calm and reason spanning 18 years, five NBA championships and countless clutch shots and speeches, Derek Fisher said he is not ready to jump into the coaching ranks just yet.

But the reasons have nothing to do with his lack of head-coaching experience or believing he is not fit for a job. With the Oklahoma City Thunder losing in six games to the San Antonio Spurs in the Western Conference Finals, Fisher said he still wanted some time before figuring out what his next step will entail.

“I haven’t gotten a chance to talk to my wife and step back emotionally from the end of the season. That’s important to do so that whatever is next, there has to be a separation from the end of the season and what just happened and then go from there,” Fisher said in his exit interview with reporters, as captured on video by the Oklahoman. “There’s a proper way to do it, which definitely starts with accepting what happened last night and having some discussions privately as a family and having discussions with the appropriate people depending on what that decision is.”

Some of those appropriate people could include the Lakers, which has spent the past two weeks interviewing a flurry of candidates to fill their vacant head-coaching position. The candidates have proved wide-ranging, including those familiar with the Lakers (Byron Scott, Kurt Rambis, Mike Dunleavy) and ones with vast head-coaching experience (Lionel Hollins, Alvin Gentry).

Though Lakers general manager Mitch Kupchak said after the NBA draft lottery that he leaned toward hiring a coach with previous experience, he did not rule out potential wild cards. One of those candidates could become Fisher. He has built plenty of equity with the Lakers given his five NBA titles here, his relationship with Kobe Bryant and his leadership experience both as a commanding locker room presence and the previous president of the NBA Players Association.
END_OF_DOCUMENT_TOKEN_TO_BE_REPLACED 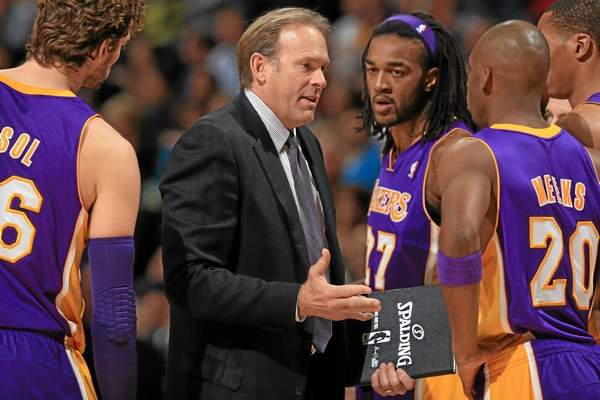 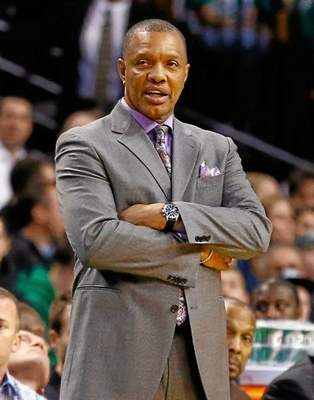 Alvin Gentry: Clippers assistant coached league’s best offense this season and has been a head coach for four NBA teams

It is possible Clippers assistant Alvin Gentry will have a different job, and it will not require him to move.

Gentry has become the latest candidate that plans to interview with the Lakers, according to a league source familiar with the situation.

The Times first reported on the development.

After interviewing with Lakers general manager Mitch Kupchak by phone on Friday, Gentry plans to meet both Kupchak and Lakers executive vice president of basketball operations Jim Buss for an in-person interview on Wednesday. Former Memphis Grizzlies coach Lionel Hollins also will interview with the Lakers later this week, according to another league source. The Lakers spent part of last week interviewing both Byron Scott and Mike Dunleavy. Gentry also plans to interview with the Cleveland Cavaliers on Friday and also interviewed with the Utah Jazz sometime last week, according to a league source. 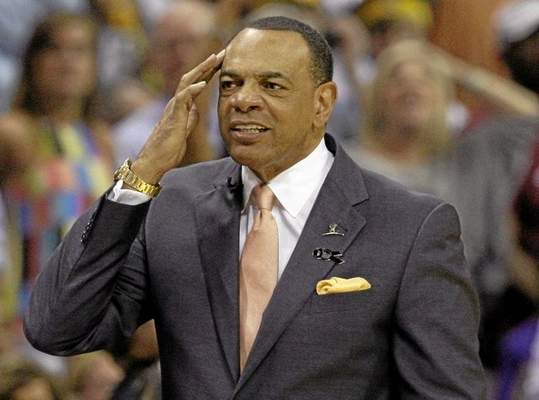 In this file photo, Memphis Grizzlies coach Lionel Hollins gestures during the first half in Game 4 of the Western Conference finals NBA basketball playoff series against the San Antonio Spurs, in Memphis, Tenn., Monday, May 27, 2013. (Danny Johnston/AP File Photo)

The Lakers have expanded their coaching search beyond candidates who have previous ties to the organization.

The Lakers plan to interview former Memphis Grizzlies coach Lionel Hollins, according to a league source familiar with the discussions. A firm date is not set, but the interview will likely take place later this week, said the league source.

The Lakers also interviewed both Mike Dunleavy and Byron Scott last week. Although the Lakers hope to hire their next head coach before the NBA Draft on June 26, they are not expected to finalize the coaching search within the next two weeks.

Hollins compiled a proven track record through five seasons with Memphis (2008-2013) with five playoff appearances, including a Western Conference Finals appearance. His disciplined leadership style and strong defensive philosophies fit partly the criteria both the Lakers and Kobe Bryant want in their next head coach.

Despite his success with Memphis, Hollins’ contract was not renewed following the 2012-13 season amid philosophical differences with Grizzlies management. 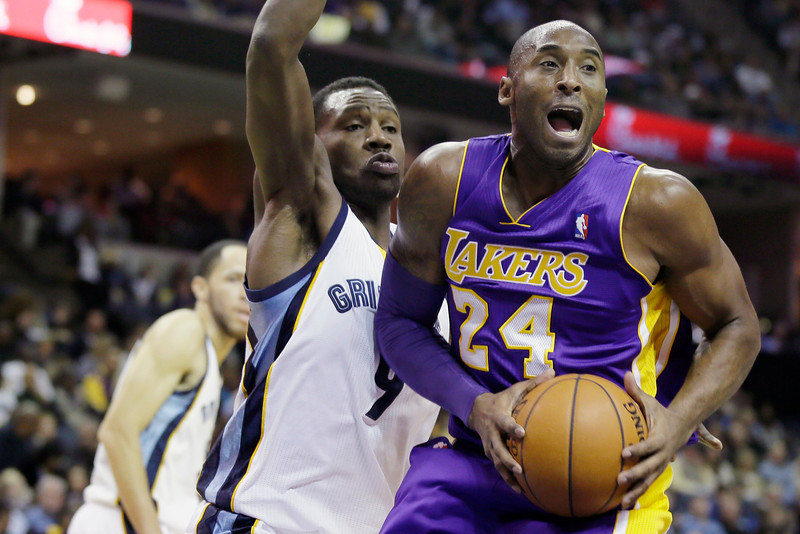 Back when Kobe Bryant entered the NBA as a wide-eyed 18-year-old, he soaked in every word Byron Scott had to say.

Scott served as a mentor for Bryant during his rookie season with the Lakers, encouraging his unmatched work ethic, sharing nuances about game preparation and sharing tales of the “Showtime Era.”

That relationship marks one of the many reasons why Scott considers himself “the perfect fit” to coach the Lakers when he appeared on 710 ESPN’s Max and Marcellus to talk about his recent interview with general manager Mitch Kupchak and executive Jim Buss about the coaching vacancy. Scott’s connection with Bryant also gives him confidence that he will buy into his belief that he will need to change his game.

“He knows that. We have to sit down and talk about the minutes and things like that,” Scott said. “We have to come to an agreement. He knows me. I’m an old school type guy. I want him to understand that and I think he does understand. We communicate during the summer by text and I’ll run into him somewhere and we’ll talk a little bit more about basketball. The biggest thing is I respect the hell out of Kobe. I think he respects me. That’s the first hurdle you have to get past.”