Police are planning a checkpoint in El Monte Friday night.
The sobriety and license checkpoint will be held from 7 p.m. Friday to 3 a.m. Saturday in the area of Santa Anita Avenue and Lower Azusa Road, El Monte police Sgt. Jimmie Pitts said in a written statement.
Over the past three years alone, El Monte police have investigated 70 DUI-related collisions involving injuries, Pitts said.
Funding for the checkpoint is being provided by a grant from the National Highway Traffic Safety Administration, through the California Office of Traffic Safety.

WHITTIER >> Police in Whittier will hold a sobriety and driver license checkpoint on Friday night, officials said.
The checkpoint will take place from 7 p.m. Friday to 2:30 a.nm. Saturday at an undisclosed location within the city, Whittier police officials said in a written statement.
Whittier police have investigated 295 DUI-related crashes that left four people dead and another 158 people injured over the past three years, according to the statement.
Funding for the checkpoint is being provided by a grant from the National Highway Traffic Safety Administration, through the California Office of Traffic Safety.

Police throughout the Whittier area and beyond are cracking down on impaired drivers during their summer time “Drive Sober or Get Pulled Over” campaign.
The extra enforcement period began Friday and continued through Labor Day, Sept. 4.
While the end of summer is dominated by picnics, barbecues and beach trips, “Sadly, the Labor Day weekend is also one of the deadliest, with alcohol- and drug-impaired drivers endangering themselves and others on America’s roadways,” La Habra police officials said in a written statement.
Police in Whittier, as well as law enforcement agencies throughout the country, are also taking part in the campaign, officials said. Whittier officers plan to place an extra emphasis on motorcycle safety during the operation.
“During this period, local law enforcement will show zero tolerance for alcohol- or drug-impaired riding,” Whittier police Sgt. David Elizarraras said in a written statement.
La Habra police have announced upcoming sobriety checkpoints to be held on Friday night, as well as on Sept. 1.
In Whittier, police have been conducting “DUI saturation patrols” to hunt for intoxicated motorists, with a special focus on areas with a history of DUI collisions or arrests, according to Elizarraras.
Funding for the program is being provided by a grant from the National Highway Traffic Safety Administration, through the California Office of Traffic Safety. 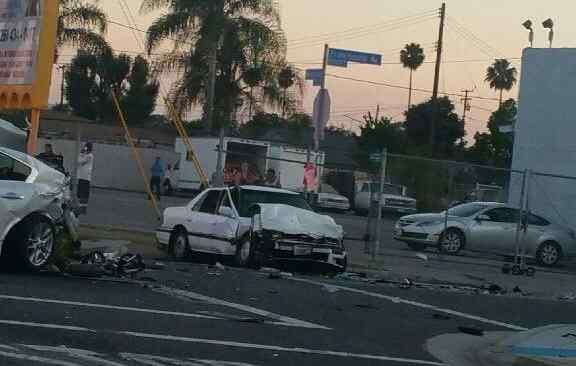 A jury convicted a A Valinda man of drunken driving and leading West Covina police on a pursuit that ended in a crash that left 10 people hurt, officials said.
The Pomona jury deliberated for less than three hours before finding Robert Anthony Lopez, 27, guilty of fleeing police in a motor vehicle resulting in serious bodily injury, driving under the influence of alcohol causing injury within 10 years of a previous DUI offense and driving with a blood-alcohol level above .08 percent causing injury within 10 years of a previous DUI offense, Los Angeles County District Attorney’s Office spokeswoman Sarah Ardalani said in an email. He pleaded “no contest” earlier to driving on a suspended or revoked license following a previous offense.
Nine innocent bystanders, as well as Lopez himself, suffered injuries in the July 18, 2016, crash at Francisquito and Walnut avenues, in the unincorporated county area of Valinda.
He faces up to 24 years behind bars when he returns to the Pomona Branch of Los Angeles County Superior Court, Ardalani said.
The chase started in West Covina, where police tried to pull Lopez over in an Acura for speeding and blowing through a stop sign, Ardalani said in a written statement.
Lopez ultimately crashed into a Nissan Maxima, which spun out of control and struck a Ford Expedition,
A woman inside the Nissan and her to young daughters were hurt, along with a drive and five passengers inside the Ford, California Highway Patrol officials said.
Firefighters had to free freed Lopez from his mangled car, officials said.
According to prosecutors, Lopez was previously convicted of reckless driving and driving with a blood-alcohol level above .08 percent in 2015.

PASADENA >> Police are planning to hold a sobriety and driver license checkpoint next weekend.
The checkpoint will be held from 7 p.m. on July 14 to 2:30 a.m. the following morning at an undisclosed location within the city, Pasadena police officials said in a written statement.
Over the past three years, seven people have died and another 117 suffered injuries in DUI-related collision in Pasadena, police said.
Police remind motorisits that in addition to alcohol, officers will be on the lookout for any drivers impaired by any substance, including prescription medications or marijuana.
Funding for the checkpoint is being provided by a grant from the National Highway Traffic Safety Administration, through the California Office of Traffic Safety.

A Covina man allegedly high on drugs led Monrovia police on a pursuit before driving home, barricaded himself inside, taking a shower, then surrendering to police in the buff on Saturday night, authorities said.
The incident just after 8 p.m. when a witness flagged down a Monrovia police officer to report seeing a possible intoxicated driver, Monrovia police Sgt. Glen Coleman said.
Officers soon found the car, driving on the wrong side of the road, and tried to pull it over, he said. The driver refused to yield, initiating a chase.
The fleeing suspect drove through red lights and ultimately made his way into the eastbound 210 Freeway, according to the sergeant.
He exited the freeway and drove to his home along Cloverland Drive, near Mesarica Road, in the unincorporated county area near Covina, officials said.
The driver entered the home and refused officer’s orders to surrender, Coleman said. He took a shower, then surrendered to police about 45 minutes later, wearing only a towel.
Brian Robert Borland, 28, who was suspected to be under the influence of an unknown drug, was booked on suspicion of DUI and evading police, Coleman said.
Police in Sierra Madre had pulled Borland over a short time before the chase began in Monrovia, but he fled from officers and was not found, authorities said.
According to Los Angeles County booking records, Borland was being held in lieu of $155,000 bail pending his initial court appearance, scheduled Tuesday in the Pasadena branch of Los Angeles County Superior Court.

WHITTIER >> Police arrested one suspected drunken driver and issued 16 citations during a checkpoint in Whittier late Friday and early Saturday, police said.
The checkpoint was held along Mulberry Drive, just east of Santa Fe Springs Road, at the southwest edge of the city, Whittier police officials said in a written statement.
Officers arrested on driver on suspicion of DUI, police said. Sixteen more were “arrested and released on citations” for driving without licenses, or with suspended or revoked licenses.

SAN GABRIEL >> Police will be screening drivers for sobriety and valid licenses during a checkpoint in San Gabriel on Friday night, officials said.
The checkpoint will take place fro 7 p.m. Friday to 3 a.m. Saturday at an undisclosed location within the city, San Gabriel police officials said in a written statement.
Over the past three years, 72 DUI-related collision have left one person dead and 25 others injured, police said.
Funding for the checkpoint is being provided by a grant from the National Highway Traffic Safety Administration, through the California Office of Traffic Safety.