BALDWIN PARK >> A man was hospitalized in critical condition and a woman was behind bars after a family dispute escalated into a stabbing early Saturday, police said.
The violence took place about 12:40 a.m. at a home in the 14300 block of Cavell Place, Baldwin Park police Lt. Mark Adams said in a written statement.
Police first received a report of a “family disturbance,” he said.
“Upon their arrival, they discovered a male adult inside the residence suffering from several stab wounds,” Adams.
Paramedics took the badly injured man to a trauma center, where he underwent emergency surgery. He was listed in critical but stable condition.
Police arrested Nydessa Hooper, 26, of Baldwin Park on suspicion of attempted murder, according to Sgt. Joshua Hendricks said.
The relationship between Hooper and the victim was not available Saturday afternoon, nor were further details regarding the circumstances of the stabbing.
According to county booking records, Hooper was being held in lieu of $2 million bail pending her initial court appearance, scheduled Tuesday in the Pomona branch of Los Angeles County Superior Court.

A man suffered major injuries, but is expected to survive, after he jumped from a parking structure in Pasadena on Friday afternoon, police said.
The suicide attempt was reported about 3:15 p.m. in the 100 block of East Holly Street, Pasadena police Lt. William Grisafe said.
Police received a call reporting a man had fallen from the second floor of a parking structure, he said.
Officers soon learned that the 21-year-old Pasadena man had jumped from the structure in an attempt to end his life, according to the lieutenant.
He was hospitalized with injuries described as major, but not believed to be life-threatening.

The structure remains sound, and officials said the damage was primarily, well… cosmetic: 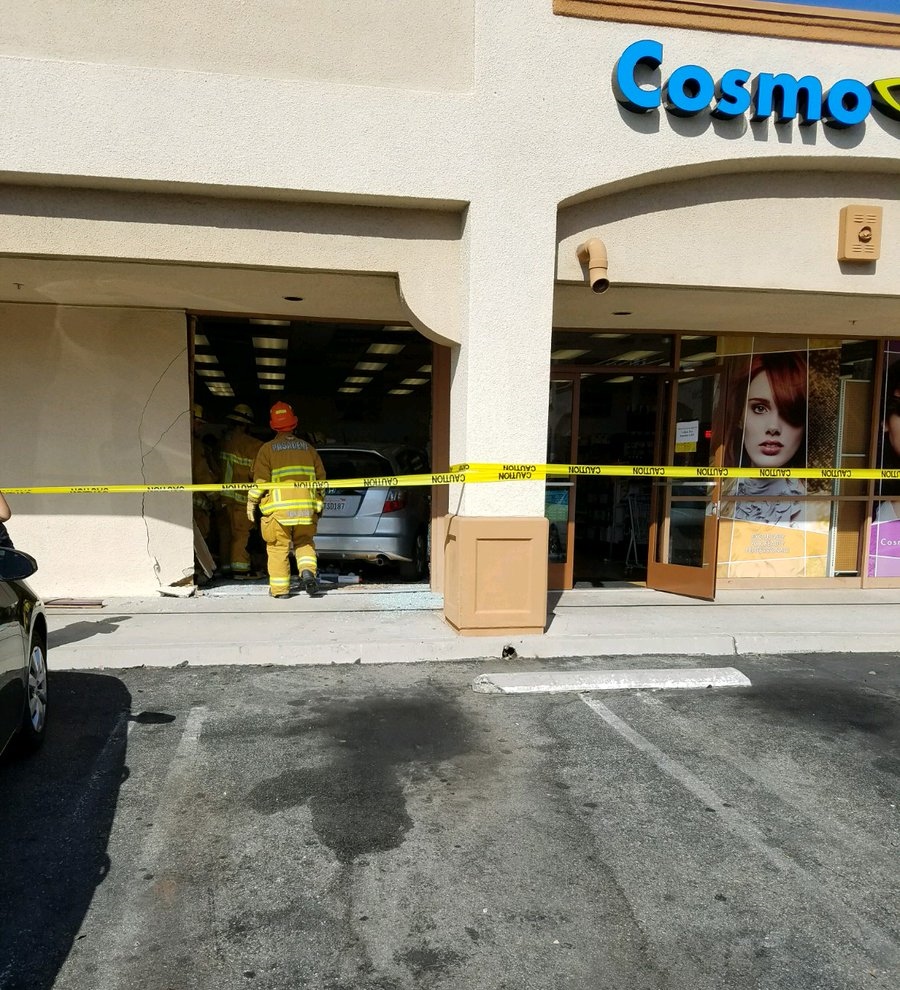 A car plowed through the front of a Pasadena salon supply store Saturday morning, causing significant damage but resulting in no injuries, officials said.
The crash was reported just after 10 a.m. at CosmoProf, 2237 E. Colorado Blvd., Pasadena Fire Department spokeswoman Lisa Derderian said.
For reasons that were under investigation by police, a Honda car smashed through the front plate glass window and ended up inside the store, officials said.
No one inside the store was injured, and the driver declined to be taken to a hospital, according to Derderian.
Officials examined the building at found it remained structurally sound, despite the damage, she said. 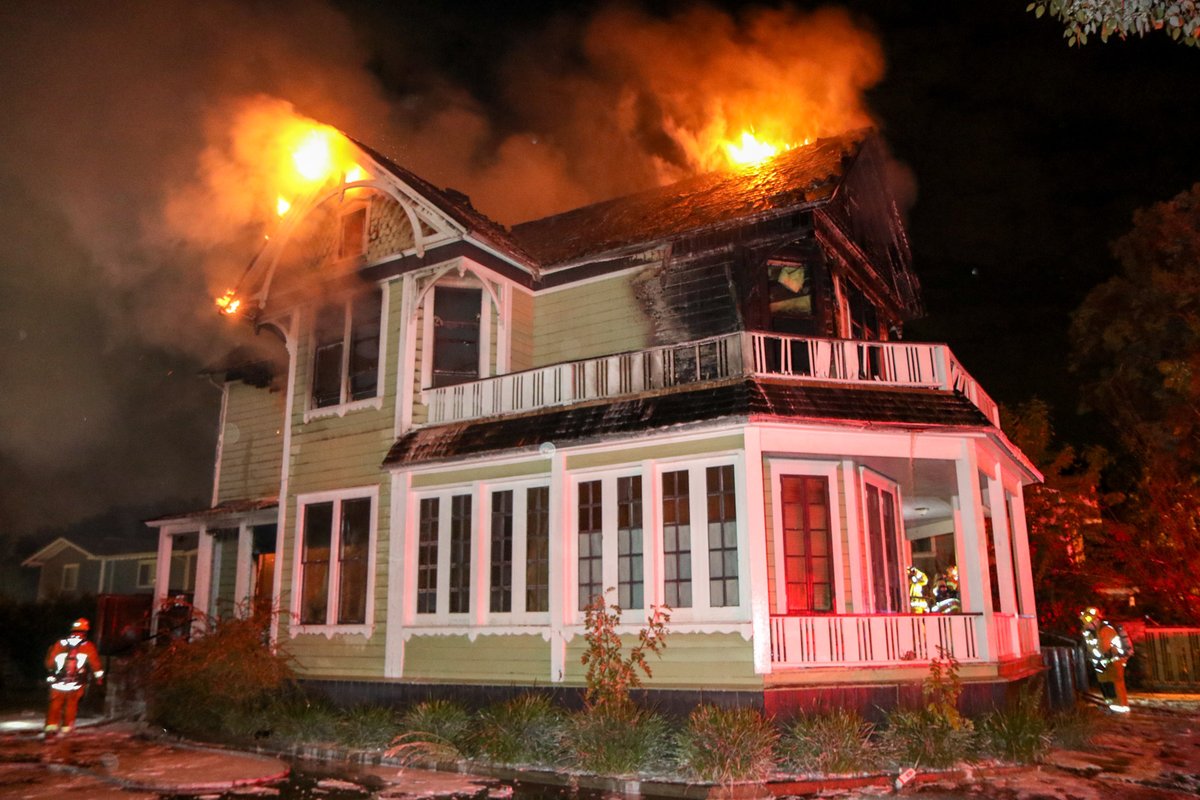 A large fire gutted a 131-year-old Victorian-style home in Pasadena early Saturday, causing nearly $1.5 million worth of damage, authorities said.
The two-alarm blaze was first reported at 2:40 a.m. at the vacant, two-story home at 30 West Mountain Street, Pasadena Fire Department spokeswoman Lisa Derderian said.
Forty-three firefighters from Pasadena and neighboring cities extinguished the flames, she said. Two firefighters were evaluated for minor injuries and returned to duty, according to Derderian.
Officials estimated the fire caused $1.4 million worth of damage to the house, and another $50,000 in damage to contents stored inside, she said.
Mary Wright Falvey, 75, of Monrovia, said her great grandfather, Amos Wright, built the home in 1886.
Though she never lived in the home, Falvey said she feels a strong connection to it because of her family’s history there.
“I’m just sick,” she said. “It was just beautiful. It had the most beautiful oak baniser curled about the entrance,” she said.
Falvey said she’s been trying to work with the city in recent months to try to have the home designated a historical landmark. She was still trying when the fire occurred.
Several investigators were summoned to the scene to look into the cause of the fire, which was yet to be determined Saturday afternoon.
Falvey said she reported spotting trespassers at the vacant home in April and has been concerned about possible squatters there. She also once visited the home to find the rear door had been forced open.
Pasadena police Lt. William Grisafe said officials received reports of people seen leaving the home after the fire broke out. It was unclear who they were, or whether they had any involvement in the fire. 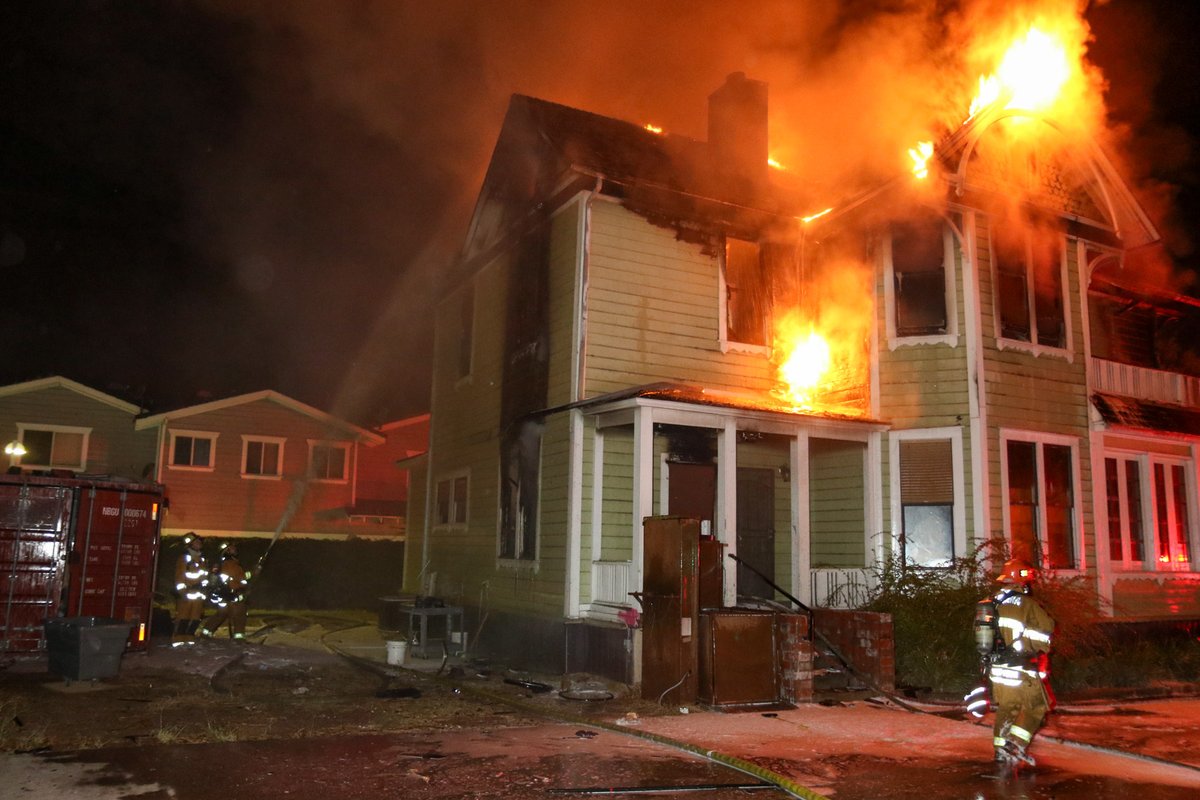 PASADENA >> A man lost his wallet to an armed robber along Colorado Boulevard in downtown Pasadena on Thursday night, police said.
The crime unfolded about 9:40 p.m. as the victim, a 22-year-old man visiting Pasadena from Northern California, was walking east along Colorado Boulevard near Los Robles Avenue, according to Pasadena police Lt. Jesse Aguilar.
“The suspect approached him from behind and produced a handgun from his waistband,” Aguilar said. The robber demanded the victim’s wallet, which he turned over.
The robber was last seen running south on Los Robles Avenue, accompanied by four other people.
He was described as a Black man between 20 and 23 years old, about 5 feet 11 inches tall and 150 pounds, with short curly hair, Aguilar said. He wore a Los Angeles Dodgers baseball cap, a black hooded sweatshirt and blue jeans. No description of his four companions was available.
Anyone with information can reach Pasadena police at 626-744-4241. Tips may also be submitted anonymously to L.A. Regional Crime Stoppers at 800-222-8477.