PICO RIVERA >> A man died after being struck by a Union Pacific freight train in Pico Rivera late Friday, authorities said.
The incident took place just after 11:40 p.m. on a set of tracks near Durfee Avenue and Stephens Street, according to Los Angeles County sheriff’s and coroner officials.
The man’s identity was not released Saturday pending notification of his family, coroner’s Lt. David Smith said. He was described as being in his 50s.
An autopsy was pending. No further details were available. 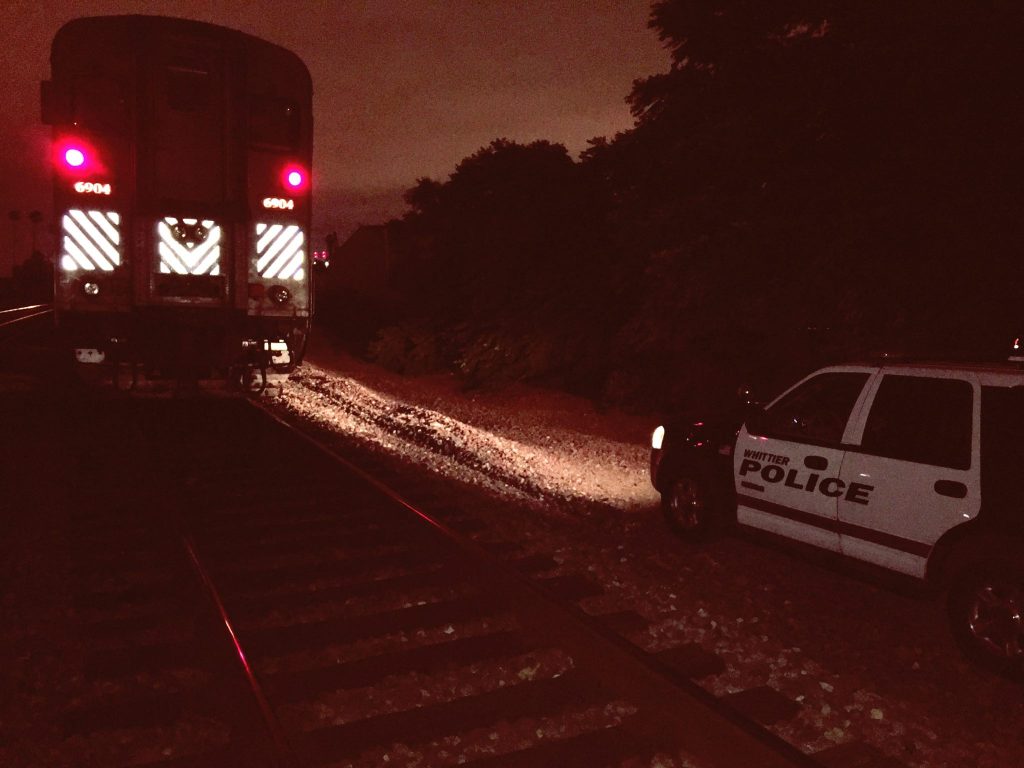 SANTA FE SPRINGS >> A 14-year-old girl died after she was struck by an Amtrak train in Santa Fe Springs on Friday night, authorities said.
The collision was reported just after 8:45 p.m. along the 11300 block of Rivera Road, between Pioneer and Norwalk boulevards, Whittier police Lt. Steve Dean said.
The girl was believed to be sitting on the tracks, listening to a radio or other device, when the train approached, officials said. She apparently did not see the train in time to get out of its way.
The train braked prior to striking the girl, but could not stop in time, Dean said.
“The victim was flown to a local hospital where she died,” Whittier police said in a written statement.
The identity of the teenage victim was not available Saturday pending positive identification and notification of family, Los Angeles County Department of Medical Examiner-Coroner Lt. David Smith said.
No further information regarding the circumstances of the incident was available Saturday.
An audio device is also suspected to have played a role in another train accident last weekend in Montebello.
A man was seriously injured when he was clipped by a Union Pacific freight train about noon Sunday near the 400 block of South Vail Avenue, according to Montebello police Lt. Julio Calleros.
The man was listening to headphones and did not hear the train approaching and blaring its horn, he said. 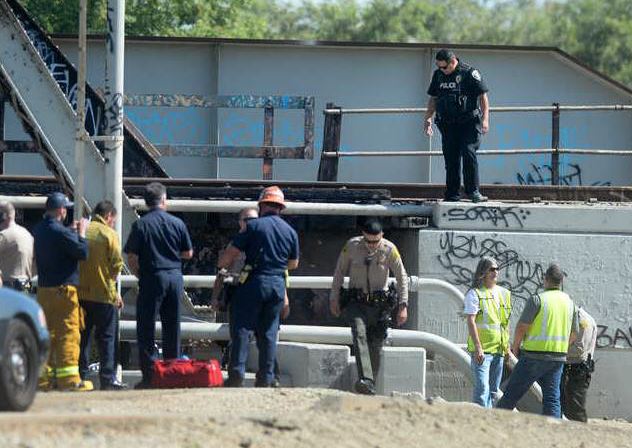 PICO RIVERA >> Suicide is suspected after a man was struck by a freight train on a bridge spanning the San Gabriel River in Pico Rivera on Wednesday afternoon, authorities said.
Deputies first received a report at 3:29 p.m. that a person had been spotted on the train tracks near a bridge spanning the river just south of Beverly Boulevard, Los Angeles County sheriff’s Lt. Noe Garcia said.
Officials soon received a second call indicating the person on the tracks had been struck by a westbound Union Pacific freight train, the lieutenant said.
The impact through the pedestrian from the bridge and down into the shallow waters of the San Gabriel River below, he said. Paramedics pulled the man from the river and pronounced him dead at the scene.
The train was traveling at about 49 mph when the pedestrian was firs spotted, Garcia said. No injuries to personnel on the train were reported.
The identity of the dead man had not been determined Wednesday evening. He was estimated to be in his 30s.

LA VERNE >> A woman died Wednesday afternoon after being struck by a commuter train in La Verne, authorities said.
The westbound Metrolink train struck the woman about 4:20 p.m. on a set of train tracks just west of San Dimas Canyon Road, alongside Arrow Highway, La Verne police Sgt. Cory Leeper said.
Upon arriving to investigate reports of a pedestrian being struck by a train, “officers found a woman on the side of the tracks who was confirmed deceased at the scene by La Verne (Fire Department) paramedics,” Leeper said in a written statement.
No injuries were reported to any of the 93 passengers on board the train, he said.
The woman’s identity was not available pending positive identification and notification of family by the Los Angeles County Department of Medical Examiner-Coroner, Leeper said. The investigation was ongoing.
The train was delayed at the scene for about 40 minutes before returning to operation, police said.
Delays of up to 45 minutes continued on the line into the early evening, according to Metrolink.
Any witnesses, or anyone with information, is encouraged to call La Verne police at 909-596-1913.

INDUSTRY >> A man died after he was struck by a freight train in Industry early Saturday, officials said.
Foul play was not suspected in the incident, which was reported about 7 a.m. on a set of train tracks near the 800 block of Lemon Avenue, Los Angeles County sheriff’s Lt. David Infante said. The man’s age was not clear Saturday.
The personnel aboard the Union Pacific saw a man on the tracks, sounded the horn and applied the brakes, but could not stop the train in time to avoid hitting the man, the lieutenant said. He was pronounced dead at the scene.
The cause of death will be determined through an autopsy by the Los Angeles County Department of Medical Examiner-Coroner. 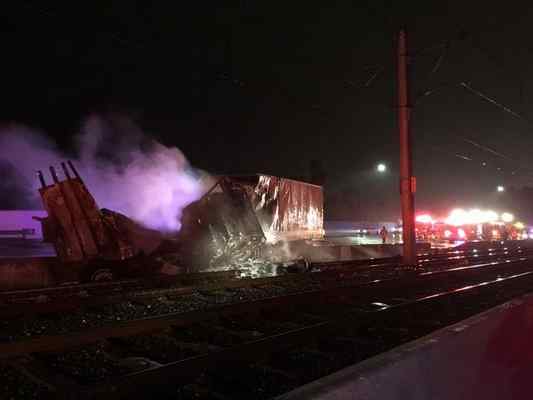 PASADENA >> Less than one day after commuters rejoiced in the long-anticipated opening of the expanded Gold Line light-rail route connecting Pasadena to Azusa, a fiery big rig crash early Sunday brought the trains to a halt between the Allen and Sierra Madre Villa stations in Pasadena and the newly-operational Arcadia station, officials said.
The big rig driver suffered minor injuries after he lost control of his tractor-trailer shortly before 3 a.m. on the westbound 210 Freeway at Madre Street, California Highway Patrol Officer Monica Posada said.
But the powerful impact sent the truck smashing through the center median and into the divider, where the Gold Line tracks sit.
The big rig quickly became “fully engulfed” in flames, according to CHP logs.
The driver was able to walk away from the crash, Posada said.
The carpool lane and the two left-hand lanes of the westbound 210 Freeway were expected to remain closed through Sunday afternoon, according to the CHP and Caltrans.
Crews cleared the still-hot wreckage and debris from the roadway and median about 11:30 a.m., Metro officials said. A Metro crew worked to assess the extent of the damage to the train tracks.
The extent of the damage to the tracks themselves was not immediately clear.
Shuttle buses carried passengers between the affected train stations, Metro officials said in a written statement.
“Trains are running every 15 minutes between Union Station and Allen Station and every 15 minutes between Arcadia Station to APU/Citrus College Station,” the statement said. “If looking for an alternative one-seat ride, Foothill Transit’s 187 Bus runs between Azusa and Old Pasadena with stops in Duarte, Irwindale, Monrovia and Arcadia.”
The crash severed the Gold Line route between Pasadena and the San Gabriel Valley just one day after an estimated 30,000 riders crowded onto trains following a ceremony Saturday morning to commence operation of the new route.
The 11.5-mile Gold Line Foothill Expansion connects Pasadena to Azusa.

COVINA >> Authorities Wednesday released the identity of a 60-year-old Covina man fatally struck my a Metrolink train.
Michael Martin Olson died at the scene of Tuesday’s 7:20 a.m. incident on a set of train tracks near Sunflower Avenue and Covina Boulevard, Ed Winter, assistant chief of operations at the Los Angeles County Department of Medical Examiner-Coroner said.
Officials initially said it appeared Olson stepped in front of the westbound commuter train, but it was unclear whether the death was a suicide or an accident.
An autopsy was yet to be performed Wednesday, Winter said. 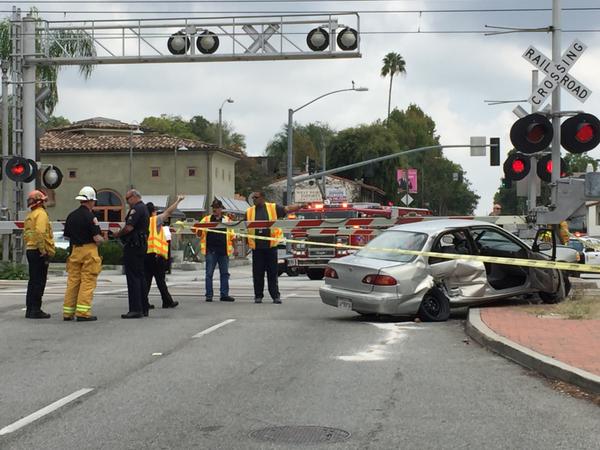 PASADENA >> Drunken driving is suspected after a collision between a commuter train and compact car in Pasadena left two people injured and shut down a portion of the Metro Gold Line route in Pasadena Sunday afternoon, officials said.
The crash took place about 11:30 a.m. at the train crossing at California Boulevard, between Raymond Avenue and South Arroyo Parkway, Pasadena police and fire officials said.
Two men inside a Toyota Corolla that was struck by the train were taken to hospitals with serious injuries, Pasadena Fire Department spokeswoman Lisa Derderian said. None of the 24 passengers aboard the train were hurt.
Officials shut down California Avenue between Raymond Avenue and South Arroyo Parkway as they investigated the scene and worked to clear the wreckage.
The westbound car was struck by a southbound train, Pasadena police Lt. John Mercado said.
“We have evidence, statements, that the car went under the arm and was on the track,” Mercado said. The conductor was unable to stop in time to avoid a crash, the lieutenant said. 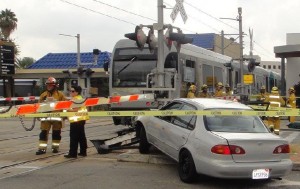 The two driver and passenger were hospitalized with injuries not believed to be life-threatening, he said.
Officers suspected the driver had been drinking and planned have blood drawn at the hospital for analysis, Mercado said.
Gold Line service between the Fillmore and Del Mar stations was initially stopped due to the collision, Metro officials said. Limited service resumed about an hours later, though passengers were cautioned of expected delays of about 20 minutes as trains in both directions sharing a single track.
Normal service resumed about 1:20 p.m., and trains were back on their normal scheduled by 2:30 , according to Metro.
California Boulevard was also reopened to vehicle traffic about 2:30 p.m., Mercado said.

PICO RIVERA >> A man died Friday morning after being struck by a commuter train in Pico Rivera, authorities said.
The collision was firs reported about 6:40 a.m. on the tracks just north of the 8500 block of Whittier Boulevard, west of Paramount Boulevard, Los Angeles County sheriff’s and coroner’s officials said.
The man, whose identity was not available Friday, was struck by a westbound Metrolink train carrying several hundred passengers, said Ed Winter, assistant chief of operations at the Los Angeles County Department of Coroner-Medical Examiner. He was pronounced dead at the scene.
The conductor called authorities to report he believed the train had struck a person in the area, sheriff’s Sgt. Edward Estrada said. The train came to a halt, and a sheriff’s helicopter soon found the body of the man.
The investigation was ongoing, however there were no initial signs of foul play, Estrada said.
The train, which was headed to Los Angeles from Riverside, was delayed on the tracks for several hours, officials said.

SANTA FE SPRINGS >> A bicyclist died after being struck by a freight train in Santa Fe Springs Friday afternoon, authorities said.
The collision took place about 2:45 p.m. on a set of tracks at Rosecrans and Marquardt avenues, Whittier police Officer John Scoggins said.
The bicyclist, described only as a man, was pronounced dead at the scene, officials said.
Witnesses indicated he was traveling north across Rosecrans Avenue and slipped in between the activated railroad crossing arms when he was struck by a train operated by BNSF, Whittier police Lt. Aaron Ruiz said.
Friday’s incident was the second death involving a train reported in just over a week in Santa Fe Springs.
A 29-year-old man died after he was accidentally struck by an Amtrak train about 7 p.m. Oct. 2, according to police and coroner’s officials.