Police are seeking clues after what was described as an improvised explosive device fashioned from a propane canister was ignited on a driveway in Pasadena on Sunday morning, but apparently failed to detonate, authorities said.
The incident was first reported just before 4 a.m. in a residential driveway in the 1800 block of North Madison Avenue, Pasadena police Lt. Pete Hettema said.
“Residents awoke to a flame coming from the driveway in front of the house and a hissing sound,” the lieutenant said. Firefighters quickly responded and extinguished the flames.
“The flame was coming from a small canister similar to a propene tank,” he said. Though the device had been burned and melted, investigators initially suspected the canister had been placed on top of a tray or pan, which was then filled with flammable liquid and set ablaze.
“It appeared the device was intended to be an IED that failed to explode,” according to Hettema. “Based on the configuration of the device, the bomb squad respond and took the device.”
There were no indications as to a motive, and no information about any possible suspects. The investigation was ongoing.
Sunday morning’s fire was not the first unexplained potential arson attack in Pasadena in recent months.
An unidentified man tossed what police described as a homemade pyrotechnic device into a crowded Cheesecake Factory restaurant on Colorado Boulevard on Feb. 2.
It resulted in no injuries and no serious damage, officials said.
After exhausting investigative leads, the FBI released video surveillance camera footage depicting a possible suspect and offered a $20,000 reward for information leading to the capture and conviction of the attacker, Deidre Fike, assistant director of the FBI’s Los Angeles field office, said at the time. The case remains unsolved.
Anyone with information can reach Pasadena police at 626-744-4241. Tips may also be submitted anonymously to L.A. Regional Crime Stoppers at 800-222-8477. 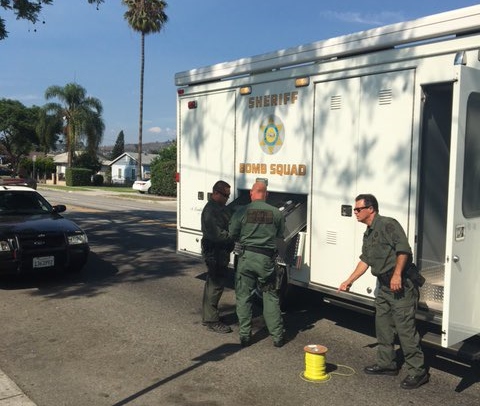 WEST WHITTIER >> A bomb squad responded to a residential neighborhood in South Whittier and “rendered safe” a makeshift bomb found inside a home on Thursday, authorities said.
The incident began just after 2:40 p.m. when a resident of the 7800 block of Broadway in the unincorporated county area called deputies to report finding an “improvised explosive device” inside a home, Los Angeles County sheriff’s Lt. Noe Garcia said.
A woman found the device as she was cleaning out the belongings of her ex-boyfriend following his arrest the previous day on alleged weapons violations, the lieutenant said.
She called authorities upon discovering the bomb upon her ex-boyfriends possessions, Garcia said. It was made from a soda can packed with explosive powder and was fitted with a fuse.
A sheriff’s Bomb Squad was summoned to scene and ultimately detonated the device under controlled circumstances in the front yard of the home, officials said.
Only the home where the device was found was evacuated during the process, according to Garcia.
The alleged owner of the explosive device, 34-year-old Daniel Saucedo, is expected to face charges of possession of a destructive device in addition to the original weapons violations, Garcia said.
According to county booking records, he was being held in lieu of $130,000 bail.

LA HABRA >> A phoned-in bomb threat disrupted a La Habra Walmart store for a little more than an hour on Saturday before police determined the threat to be unfounded, authorities said.
Police were first notified shortly after noon that staff at Walmart, 1000 E. Imperial Highway, had received a phone call from a man claiming there was a bomb inside the store, La Habra police Lt. Adam Foster said.
Officials evacuated the store, he said. Police searched the building, along with a bomb squad, and found nothing out of the ordinary.
Police declared the scene safe about 1:30 p.m., and the business resumed operation, he said.
An investigation into who placed the threatening call was underway.

LA HABRA >> A bomb squad responded to the La Habra Police Department on Thursday after a residents brought in an envelope containing an unknown white powder — ultimately determined to be baby powder — that they received in the mail.
The incident began about 2:45 p.m., when two people arrived at the front counter of the police station, 150 N. Euclid Street.
“They indicated they had picked up their mail from their post office box, which is located in the city of La Habra, and returned home,” La Habra police officials said in a written statement. “At approximately 11:30 a.m., they opened the envelope, from an unknown sender, and an unknown white powdery substance spilled out.”
The concerned residents contacted the post office, which, in turn, referred them to the La Habra Police Department.
“Due to the unknown nature of the substance, as a precautionary measure, a containment area encompassing the police department was established and Los Angeles County Fire Department contacted,” according to the statement.
An Orange County Fire Department bomb squad determined about 5 p.m. that the powder in question was, in fact, baby powder. 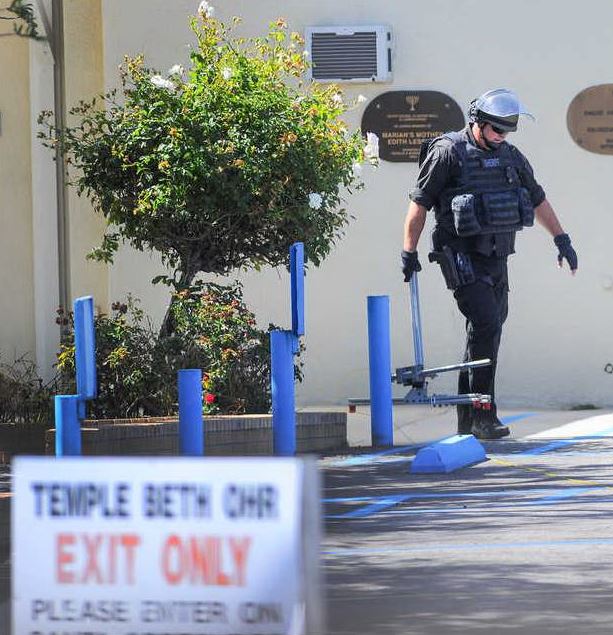 LA MIRADA >> A bomb squad responded to a Jewish temple in La Mirada Wednesday after the synagogue received a “suspicious package” in the mail, ultimately finding it contained nothing dangerous, authorities said.
The incident began shortly before 2 p.m. at Temple Beth Ohr, 15721 Rosecrans Ave., at Santa Gertrudes Avenue, Los Angeles County sheriff’s officials said.
The package, received via Priority Mail, was deemed suspicious due to its return address, Sgt. George Suarez said. Further details were not available.
The large box was addressed to the temple in handwriting, Rabbi Mark Goldfarb said.
“But the return address did not have a return address. Instead, in that area, there was a message: ‘Jason, the male child, to rule the world with an iron rod,” Goldfarb said. The statement appeared to be a reference to New Testament end times prophecies in the Book of Revelations.
Other “indecipherable things” were also scrawled on the box, the rabbi said. “That made the package suspicious in our minds.”
The package remained on an exterior porch at the south side of the building as deputies summoned a bomb squad team from the sheriff’s Arson-Explosives Detail to examine the package further, Suarez said.
Bomb squad members shredded the package with a powerful water cannon, sheriff’s and temple officials said.
Inside were found Bibles, coins and a music box, Goldfarb said.
“In the end, it turned out to be someone who tried to send us a gift,” he said. “But again, because of the strange and cryptic messages in the return address, it popped us as a suspicious package in our eyes.”
Deputies evacuated the temple, along with 50 to 60 children at the next-door United Methodist Church school and three to four nearby houses before officials sounded the all-clear, Suarez said. The evacuated students were taken to nearby Eastwood Elementary School, 15730 Pescados Drive.
Both Rosecrans and Santa Gertrudes avenues at their intersection for about two hours.

SANTA FE SPRINGS >> A man claiming to have a bomb in his car drew a bomb squad to a Santa Fe Springs neighborhood late Saturday, but no explosives were found, authorities said.
The incident began about 8:40 p.m. along Pioneer Boulevard, between Telegraph Road and Florence Avenue, Whittier police Sgt. Ryan Todd said.
“Officers were advised the suspect had entered the parking lot of a business and told passers-by he had a bomb in his car, then drove off,” Officer John Scoggins said in a written statement.
Police quickly found and detained the man driving just down the street and pulled him over, Scoggins said. He was “detained without incident.”
Police shut down Pioneer Boulevard, evacuated nearby homes and summoned a Los Angeles County Sheriff’s Department bomb squad to investigate the car.
The bomb squad ultimately determined there were no explosives in the vehicle, Todd said.
The detained man was taken for psychiatric evaluation.

EL MONTE >> A bomb squad blew up a safe found abandoned in a library parking lot in El Monte Thursday evening, ultimately finding it to be empty, authorities said.
The incident began about 6:50 p.m. when police received reports of a suspicious object found in the rear parking lot of Norwood Library, 4550 N. Peck Road, El Monte police Lt. Ben Lowry said.
Officers found a reinforced metal safe, about 2-and-a-half feet tall, sitting in the parking lot, the lieutenant said.
Out of an “abundance of caution,” Lowry said officials evacuated about six nearby homes and summoned a Los Angeles County Sheriff’s Department bomb squad to the scene.
A bank at 9:47 p.m. signaled the bomb squad’s detonation of the safe, Lowey said. “The container was empty.”
Police were still looking into where the safe came from, and whether it had been previously stolen before it was found empty and abandoned.

A bomb squad checked out a pair of duffel bags found in Old Pasadena after they roused suspicions Friday afternoon, but ultimately found they contained nothing dangerous, police said.
The discovery was made shortly after 1 p.m. at Colorado Boulevard and Arroyo Parkway, Pasadena police Lt. Jason Clawson said.
Two duffel bags were found unattended, Lt. John Mercado said. One of them contained bottles, which, in turn, contained small bits of metal. The second duffel bag was secured with a heavy-duty padlock, he said.
Finding the bags suspicious, police evacuated the area and summoned a Los Angeles County Sheriff’s Department bomb squad to investigate, the lieutenant said.
Using a robot, bomb squad members opened the second bag and found it primarily contained rocks. Nothing explosive or hazardous was inside.
Officials declared the area safe shortly after 3 p.m.
It was unclear how the bags full of unusual items got there. 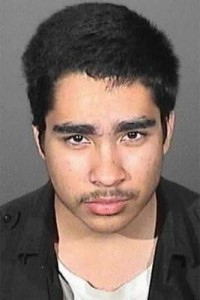 LOS ANGELES >> An El Monte teen accused of making a pipe bomb pleaded not guilty Wednesday to three felony charges related to possession of explosives, authorities said.
During an appearance in Los Angeles Superior Court, Andres Velo, 18, denied charges of possession of a destructive device, possession of a destructive device in a home and possession of ingredients to make a destructive device, Los Angeles County District Attorney’s Office spokeswoman Jane Robison said.
He was ordered back to court Oct. 28 for a preliminary hearing, she said. In the meantime, authorities are holding Velo in lieu of $500,000 bail.
Police arrested Velo Saturday afternoon, about three hours after his sister showed up at the El Monte Police Department and reported finding a bomb she said her brother had assembled at a home in the 2800 block of Nevada Avenue, police officials said. She brought the device with her in her car, prompting officials to cordon off the area while a bomb squad detonated the bomb.
Police arrested Velo when he returned home, police added.
No information was available regarding why Velo allegedly made the pipe bomb, or what he may have planned to do with it.
If convicted as charged, Velo faces up seven years and eight months in state prison.

ALHAMBRA >> A bomb squad responded to Alhambra Saturday after a woman cleaning out her parents’ home discovered 26 grenades and an anti-tank rocket launcher, which were ultimately found to be inert, officials said.
The incident kicked off about noon at a house in the 200 block of South El Molino Street, Alhambra police Sgt. Richard Aguayo said.
Upon discovering 26 rifle grenades and an anti-tank rocket launcher, “She wisely called the police rather than touch them,” Los Angeles County sheriff’s officials said in a written statement.
Alhambra firefighters and a sheriff’s bomb squad responded to the scene and evacuated nearby homes as a precaution.
But the incident soon concluded when investigators determined the grenades and rocket launcher were inert practice devices and not dangerous, officials said.
Sheriff’s officials took the devices to be properly disposed of.