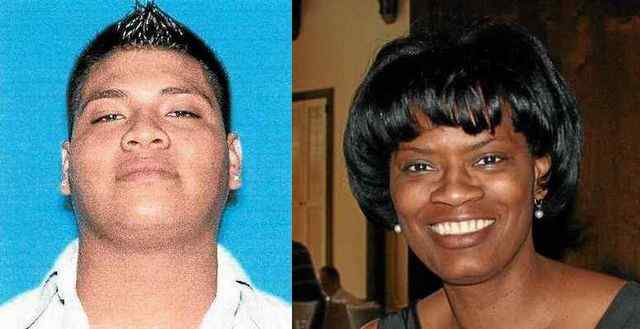 A former international fugitive will spend the rest of his life in prison for stabbing a 50-year-old disabled neighbor to death inside her Pico Rivera home in 2012, a judge ruled Wednesday.
Luis Fernando Diofron, also known as Luis Fernando Diofron Lemus, 25, was sentenced to life in prison without the possibility of parole for the Aug. 10, 2012 slaying of Denise Battey at her home in the 11900 block of Allard Street, Los Angeles County District Attorney’s Office spokeswoman Sarah Ardalani said in a written statement.
He pleaded guilty to one count of murder on June 29. He also admitted to the special circumstance that the murder was done during the commission of a burglary, as well as the special allegation that he personally used a knife in the slaying.
“Lemus broke into his neighbor’s Norwalk home and fatally stabbed the 50-year-old woman,” Ardalani said.
Diofron was also initially accused of murder during the coarse of a rape, but the rape allegation was dismissed under a negotiated plea arrangement, officials said.
The killer, a Guatemalan national, was in the United States on a work visa and living next door to Battey at the time of the slaying, sheriff’s officials said.
He attacked her as she watered here garden, then dragged her inside her home where he stabbed her to death, according to investigators.
Diofron then fled to Guatemala, where he remained for two years before being captured in late-2014 and extradited back to California to face justice.
Battey worked for the U.S. Social Security Administration and tutored students on college preparation in her spare time, family members said. A recent back surgery, as well as severe sciatica in one of her legs, left her defenseless.

BALDWIN PARK >> A Baldwin Park man received a prison sentence of 16 years to life Friday for stabbing another man to death during a fight in late last year, authorities said.
Steven Barron, 55, pleaded “no contest” to a count of second-degree murder for the Dec. 9, 2016, slaying of 43-year-old Gilbert Ochoa of Baldwin Park, according to Los Angeles County District attorney’s officials. He also admitted the special allegation that he used a knife in the crime during Friday’s appearance in the Pomona branch of Los Angeles County Superior Court.
The fatal confrontation unfolded shortly after midnight in a residential garage in the 4000 block of Harland Avenue.
Barron, who was renting a room at the home, became involved in an argument with Ochoa as Ochoa was having a conversation with Barron’s landlord, Deputy Guillermina Saldana of the sheriff’s Information Bureau said at the time. Ochoa lived nearby.
“The fight led to a number of physical confrontations started by Barron,” district attorney’s office spokeswoman Sarah Ardalani said in a written statement.
“During one of the confrontations, Barron armed himself with a knife and Ochoa armed himself with an aluminum pole,”she said.
Barron suffered a broken arm during the fight, officials said.
He stabbed Ochoa in the chest with a large kitchen knife, sheriff’s officials said.
“Barron gained control of the pole and hit the victim over the head,” Ardalani said.
Police detained Barron for questioning and ultimately arrested him on suspicion of murder several hours later.
Friday’s sentencing was the result of a negotiated plea arrangement, Ardalani said.
If he had been convicted at trial of first-degree murder, Barron could have faced up to 26 years to life in state prison. 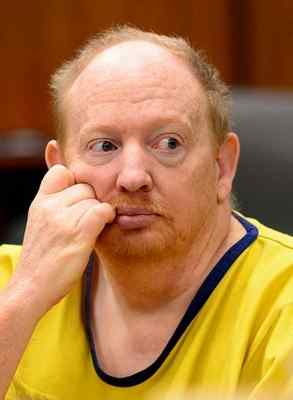 PASADENA >> A man received two life prison terms, plus an additional 14 years behind bars, on Wednesday for a 2012 arson fire at a Pasadena boarding home that left two of his roommates dead, authorities said.
Garth Allen Robbins, 54, will spend the rest of his life in state prison after receiving his sentence from Los Angeles Superior Court Judge Stan Blumenfeld at the court’s Pasadena branch, according to Los Angeles County District Attorney’s spokesman Greg Risling.
A Pasadena jury convicted him in April of two counts of first-degree murder, one count of arson causing great bodily injury and one count of arson of an inhabited structure for the Nov. 1, 2012, arson at the illegal boarding home at 1385 El Sereno Ave. The jury also found true the special allegations of multiple murder and murder during the commission of an arson.
Robbins was staying at the boarding home along with 17 other residents, who were asleep inside when he lit the three-story house on fire during the early-morning hours.
“Evidence presented at trial showed that Robbins started the fire at about 2 a.m. when 17 others were asleep inside the house,” Risling said in a written statement. “He doused his room with gasoline and set it ablaze.”
Residents Cliff Juan Clark, 56, and Paul Richard Boyd, 75, died in the fire, coroner’s officials said. Another 65-year-old resident of the boarding home suffered severe injuries, but survived.
At Wednesday’s sentencing hearing, “Robbins was sentenced to two consecutive sentences of life without the possibility of parole, plus an additional 14 years,” Risling said.
The motive in the deadly arson was never fully explained, officials said.
Robbins stated during the trial process that, “he wanted his life to go away,” but there was no indication that he was angry with his roommates, Pasadena Fire Department spokeswoman Lisa Derderian said.
The owner of the boarding home subsequently pleaded guilty to 23 Pasadena city ordinance violations. She was sentenced to three years of probation and ordered to pay $6,200 in fines.

PHOTO: Garth Allen Robbins, 54, was convicted of two counts of murder and two counts of arson on Friday, April 7, 2017, for a Nov. 1, 2012, arson fire at a Pasadena boarding home that left two men dead and another badly burned. Robbins is pictured during his preliminary hearing Tuesday, June 18, 2013, in the Pasadena branch of Los Angeles County Superior Court. File Photo 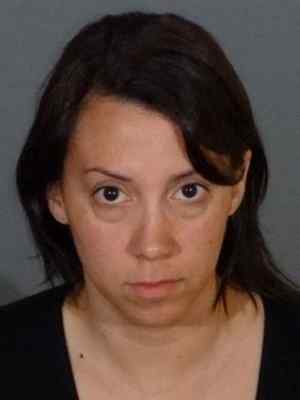 WEST COVINA >> A judge sentenced a West Covina woman to two years in state prison Friday for embezzling more than $92,000 from local Girl Scouts, Little League and PTA organizations for which she volunteered, authorities said.
Veronica Monique Paderez, 38, pleaded “no contest” to three felony counts of embezzlement in November.
Between 2013 and 2015, she embezzled more than $52,000 from the Vine Elementary School PTA, $26,000 from the West Covina American Little League and $11,000 from Girl Scout Troop #4754, for a total theft of more than 92,000, according to investigators and prosecutors.
“Paderez was a volunteer with each of the organizations and had access to their accounts and money collections,” Los Angeles County District Attorney’s Office spokeswoman Sarah Ardalani said in a written statement.
Upon sentencing Paderez, Judge Victor Martinez also ordered her to repay $92.048.81 to the three organizations she stole from, Ardalani said.
She could have received a lesser sentence had she been able to produce a lump sum restitution payment of $15,000 at Friday’s hearing, officials said.
But she did not have the money at the hearing, according to Ardalani.
Paderez was initially charged with nine counts of theft by embezzlement and could have faced up to four years behind bars if convicted at trial as charged.
Paderez served as treasurer of the Vine Elementary PTA for the 2014-2015 school year. She also served as treasurer and auxiliary vice president for the Little League, and police said she was in charge of the local Girl Scout troop and controlled its accounts.
West Covina Police Officer David Sifling, who took part in the investigation, said Paderez showed no signs of remorse in court.
He commended police investigators, as well as Los Angeles County Deputy District Attorney Rebecca Goodrich, for their hard work in unravelling the complicated case.

MONTEREY PARK >> A Bakersfield man received a sentence of more than 16 years in state prison Thursday for stabbing another man 15 times, killing, at a Monterey Park pizza parlor four years ago, officials said.
A Los Angeles Superior Court jury in Burbank convicted Jose De Jesus Ruiz, also known as Jose De Jesus Salas, 26, in July of second-degree murder for the Oct. 6, 2012, stabbing death of 25-year-old Patrick Raymond Ortega at Shakey’s, 1955 S. Atlantic Blvd. The jury also found true the special allegation that Ruiz personally used a knife in the crime.
Judge Michael Carter sentenced Ruiz to 16 years to life in state prison, Los Angeles County District Attorney’s Office spokeswoman Sarah Ardalani said.
The stabbing took place shortly after 7 p.m. as Ruiz was gathered at the restaurant with members of a youth football organization.
He became involved in a dispute with Ortega, who witnesses testified was being “disruptive” inside the pizza parlor while dining with friends, according to Deputy District Attorney Theodore Swanson, who prosecuted the case.
Ruiz briefly left the restaurant before returning and stabbing Ortega 15 times, Swanson said.
Ruiz was found hiding in his car several hours later and arrested, officials said. .
Second-degree murder is defined in California as the unlawful killing of another with malice, but without deliberation or premeditation.
If convicted of first-degree murder — a murder deemed deliberate, premeditated and with malice — Ruiz could have faced a maximum sentence of 26 years to life behind bars.

MONTEREY PARK >> A man who “viciously” stabbed another man to death at a Monterey Park pizza parlor is guilty of murder, a jury ruled Thursday.
The fatal stabbing of 25-year-old Patrick Raymond Ortega took place Oct. 6, 2012, at a Shakey’s restaurant, 1955 S. Atlantic Ave., according to Los Angeles County sheriff’s and district attorney’s officials. He was stabbed 15 times with a large knife, with a blade measuring more than 6 inches long.
“The jury deliberated for two hours before finding Jose De Jesus Ruiz of Bakersfield guilty of second-degree murder,” district attorney’s office spokeswoman Sarah Ardalani said in a written statement. The convict is also known as Jose De Jesus Salas.
The jury also found true the special allegation that Ruiz personally used a knife in the slaying.
“To stab an unarmed person so many times and in such a vicious manner is unfathomable,” said Deputy District Attorney Theodore Swanson, who prosecuted the case. “No one should have been killed that day.”
The deadly stabbing took place shortly after 7 p.m., according to sheriff’s investigators and Monterey Park police officials.
Evidence and testimony during the trial showed Ruiz was affiliated with a youth football organization that had met for a gathering at the pizzeria, Swanson said. Ortega was not affiliated with the sports organization and was at the restaurant with friends.
Testimony showed Ortega became “disruptive,” including gang references, the prosecutor said.
Surveillance video footage from a neighboring Bank of America branch showed Ruiz and another man exiting the restaurant just before the fatal attack.
“The defendant then reenters Shakey’s and stabbed the victims 15 times,” Swanson said.
Immediately after, Ruiz left the restaurant and returned to his car.
“He’s seen on video taking of his Dodgers jersey an hiding it under the wheel well of the car,” Swanson said. “He then gets into the back seat of the car and lies down.”
Police found Ruiz hiding in the car and arrested him several hours later, officials said.
The knife used in the killing was found hidden between the tire of a car Ruiz’s car had been parked next to, Swanson said. DNA tests determined blood on the knife, as well as Ruiz’s socks, belonged to Ortega.
The confrontation involved only Ruiz and Ortega, Swanson said. There may have been other arguments or fights among representatives of rival youth football teams, but the fatal stabbing was not believed to be related to the football rivalry.
A Monterey Park police officer fired a shotgun during the aftermath of the shooting, but injured no one, sheriff’s officials said in a written statement.
The officer opened fire as a car drove toward him at high speed, authorities said at the time. A woman at the wheel of the car was arrested on suspicion of assault on a police officer, but she and her passengers were not suspected to be involved with the stabbing.
Ruiz’s trial began June 27.
Ruiz faces a maximum sentence of 16 years to life in state prison when he returns to the Burbank branch of Los Angeles County Superior Court for sentencing Sept. 1, Ardalani said.
If he had been convicted of first-degree murder, Ruiz would have faced up to 26 years to life behind bars.