END_OF_DOCUMENT_TOKEN_TO_BE_REPLACED

Ayala’s Kenisha Liu will be seeded second, following her time of 1 minute and 49.12 seconds in the prelims, going into the Girls 200-Yard Freestyle Championship Race at the CIF State Swimming and Diving meet.

Liu will compete in the Girls 100 free championship race after a 50.42 second prelim time earned her the second seed.

Mikki Thompson of Ayala finished 13th in standings following prelims and will compete in the consolation finals of the girls 200 IM.

Michael Tenney of Chino Hills qualified for the boys 500 freestyle event as the No. 5 seed following a time of 4:30.29 . He also finished 18th in the Boys 200 free. He will be an alternate for consolation finals.

Stay tuned for more throughout the day 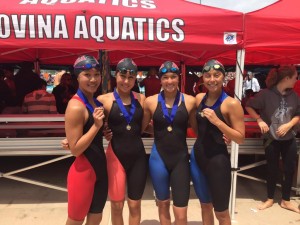 The Girls 200 IM will feature a number of local coverage area swimmers.

Freshman Mikki Thompson of Ayala finished with the fastest time among area swimmers with a time of 2 minutes and 06.03 seconds, which lead to her being seeded third going into the championship race. 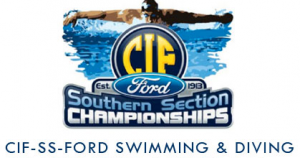 Emily Longfellow of REV finished third in the Girls 200 IM and is seeded at No. 10, placing her in the consolation finals. Longfellow missed a chance at the championship race by .02 after posting a time of 2:08.30.

Longfellow also competed in the 200 Medley Relay to meet the meet along with REV teammates, Alexa Melara, Autumn D’Arcy and Emily Rigsby. REV finished with a time of 1:48.29.

Redlands (Melissa Pepper, Summer D’Arcy, Niki Proctor and Alex Zak ) placed No. 6 going into the championship race with a time of 1:48.97.

Diamond Bar will also compete in the race as the No. 7 seed after a time of 1:49.37 in the prelims. Diamond Bar’s team consist of Gani, Jenna Lloyd, Kelly Cheng and Kelsey Lloyd.

For Ayala, Kenisha Liu qualified for the 100 yard free championship race following a prelim time of 51.21. Rigsby will compete in the consolation race.

CHECK BACK for more

Senior Adrian Hui of Webb will compete in the CIF Southern Section’s boys 50 yard freestyle championship event as the No. 1 seed. Hui had a qualifying time of 21.49 seconds.

Richard Parnell will compete in the championship finals of the 100 free.

Prestin Li of Diamond Bar finished the highest among local area athletes for either boys or girls Division II diving during the first day of the CIF Southern Section Swim and Dive Finals. Li finished with a score of 435.75 to finished ninth.

Noah Luna of Damien was second among local area boys finishing 14th overall in the field of 32, with a score of 367.05, followed by Aaron Garcia of Upland.

There is a lot to look forward to with the CIF Swimming and Diving Championships taking place this week (May 11-16) at Riverside City College.

Fans are bound to have new faces to consider among local area talent following the loss of Kyle Coan and Kyle Gornay, both who were Los Angeles News Group’s male swimmers of the year, due to graduation last year.

On the girls side,  back-to-back Female Swimmer of the Year for the Los Angeles News Group, Sonia Wang, is no longer with Upland High School and is swimming for JSerra High.

Some new faces we may hear a lot could come from Los Osos, who will look to win its third consecutive CIF Team Championship, Rachel Forbes and Brian Whittington. Both of which had impressive showings at the Baseline League Finals Meet.

END_OF_DOCUMENT_TOKEN_TO_BE_REPLACED

For the boys, both the Los Osos and Damien High athletic directors have tweeted that their respective teams had won a share of the league title.

Despite the tie, the Damien boys swimming and diving team has won at least a share a of the league championship each of the last 19 years in a row, according to athletic director Jeff Grant.

Grant also stated that Damien defeating Los Osos in the dual meet during the season and Los Osos’ victory at the league finals this past week played a role in the outcome and the eventual tie in the league standings.